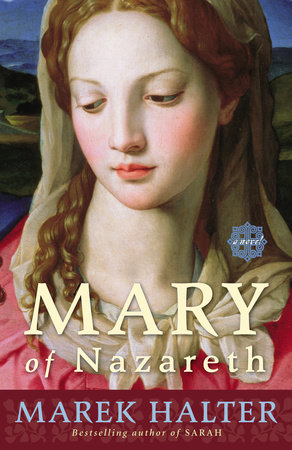 1. Mary of Nazareth is widely known as the virgin mother who gave birth in a stable, however, Marek Halter brings the reader into an entirely different world: the youth of Miriam of Nazareth. What did you expect before you read this book? How did you feel about Halter’s portrayal of Miriam? Is it similar to how you’d imaged her? Why or why not?

2. Within minutes of meeting Barabbas, Miriam “did not need to know any more to guess that he was someone who did exactly what he wanted” (p. 6). How does her initial reaction to Barabbas affect his character throughout the novel? What other characters share this same quality?

3. What did Joachim do that caused him to be crucified? Who was he trying to save? What did you feel when you read what the Roman soldiers were doing? How would you have reacted had you been Joachim?

4. When Miriam decides she must ask Barabbas for help to free her father, only two others believe in her decision. Who are they? Why are they so supportive of her decision to find Barabbas? How does this reflect on how they each behave later in the novel?

5. Obadiah was an am ha’aretz. What does this mean? How did it affect him both in his life and after his passing? How did you feel about the prejudice against the am ha’aretz? Can you think of similar prejudice that is prevalent today?

6. Barabbas thinks “How long would these poor people, who were being bled dry by Herod, wait for a Messiah to come and deliver them, instead of delivering themselves?” (p.72—73). What does this tell you about Barabbas’s need for change? How does this speak to the religious sentiment at the time? What modern echoes do you see today?

7. Consider parental relationships in Mary of Nazareth. How are each of the characters affected by the actions of their parents: Miriam with her parents, Mariamne with Rachel, and later Yeshua with Miriam?

8. After Joachim is rescued from the cross, he promises Obadiah something. What does he promise? What does that tell you about education and literacy at the time?

9. When Barabbas calls a meeting of powerful men at Yossef’s house, what do they discuss? What was their final decision? What resonated for you in those debates? Were they similar to political debates of today? Miriam says, “You all love words, but you don’t know how to use them” (p. 121). How is she correct?

10. Throughout the novel the word “Messiah” is spoken by so many. Why is everyone waiting for the Messiah? People believe that Joseph of Arimathea has a healing power and they cry “miracle” outside of the Essene house because they are so desperate for a miracle. Why? Can you think of any religious parallels today?

11. From what you know of the conception of Jesus, how did you feel about Halter’s description? How does each of the main male characters react when Miriam tells them? Were you surprised by any of their reactions? For a girl of “around twenty” without a husband, what would the reaction be today?

13. What was your reaction to the Gospel of Mary? How did you feel about her impatience with Yeshua? Did you sympathize with her frustration? Why or why not?

14. We learn from the Gospel of Mary that Mariamne becomes Mary of Magdalene. Were you surprised to read that Mary of Nazareth was expecting this gospel to be taught by Mary Magdalene? Can you image what may have been written in the missing parts of the gospel?

15. In Warsaw, Marek Halter, as a character within the novel, meets a woman named Maria who saved thousands of Jewish children during the war. What is her connection to the Gospel of Mary? What did you think about the name of her son, and his fate?

Stealing Athena
Back to Top