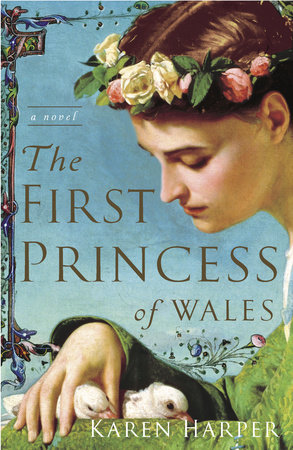 In Karen Harper’s sweeping novel, the years-long, tempestuous love story of Joan of Kent and Edward, the Prince of Wales, is brought to vivid life. As we follow the couple’s triumphs and tragedies, many themes for discussion come to light: the power of love, the rules of war, honor versus loyalty, and the bounds of tradition at odds with personal freedom. Consider these questions as your book group talks about The First Princess of Wales.

1. The First Princess of Wales is filled with colorful and intriguing characters, both at the heart of the story and at its edges. Which were some of the ones that stood out for you? Why?

2. “Joan just rolled her eyes at the wry, lively old woman, Marta, who had been so many things to her for as long as she could remember–nursemaid, companion, taleteller, playfriend, almost a mother, even” (page 5). Discuss Joan’s relationship with Marta. How would you best characterize it? Did it change as they each got older? If so, how?

3. Joan and Edward’s first meeting at King Edward’s court is anything but ordinary (pages 35—40). What did you make of their encounter? What did their meeting say about each of their personalities? Did it foreshadow any part of their long relationship?

4. Marta thinks, “If Joan of Kent, young though she be, were head of this family rather than her two elder brothers, the restful white hart on the family crest might well be a white, raging whirlwind” (page 10). Do you think Joan was wild? Compare Joan to Princess Isabella; which of the two seemed more reckless? Is “wildness” a good or bad quality to possess in The First Princess of Wales?

5. After the brutal murder of her husband, Joan’s mother, Lady Margaret, retreats from her family, shunning Joan in particular. Why does she do this? What are some of the effects this behavior has on Joan? Discuss their relationship. Joan’s young daughter, Bella, shares similarities with Joan in terms of her role in the family. What are some of these similarities?

6. “It is all vast, Lady Joan, vast and busy out there. Step out a moment if you wish. All will be as it will be, one way or the other, whatever you do” (page 34). What do Morcar’s words to Joan mean, both in that moment and through the book? Did Joan believe in fate in the same way Edward did? Why or why not? What did you think of Morcar and his prophetic astrological charts?

7. Family, and familial duty, is at the center of The First Princess of Wales. Talk about the important, and sometimes detrimental, role family has on the main characters.

8. In thinking of Joan after their first meeting, Edward reflects, “She, for a certainty, would not be meek or willing. She, like his most prized destrier or precious female peregrine falcon, would take some handling and some taming” (page 53). Can you think of some examples where Edward attempts to “train” Joan? Was he successful?

9. After her first meeting with Edward, Joan chastises herself for thinking about him: “Pure, rank foolishness to fathom love in so short a span, so impossible a circumstance” (page 110). Why doesn’t she let herself fall for him? What’s behind Joan’s continuous efforts to deny herself what she truly wants?

10. Joan and Edward’s physical encounters are usually described with terms such as “assault,” “defense,” “conquer,” “surrender.” Why did the author choose these words of battle to describe what were romantic interludes?

11. As Joan and Isabella prepare to ride in the tournament dressed as men, Joan thinks, “It would be . . . a statement to anyone who tried to rule and control her and Isabella’s lives” (page 218). Did Joan succeed in making such a statement? What are examples of Joan’s similar actions? Did they have the desired effect? Why or why not?

12. “Power and victory assailed her: the king, doting on her, gazing fondly on her, yet unknowing of her true intents and purpose” (page 239). What did you make of Joan’s plan to seduce the king? What of her other attempts at revenge? Was it surprising that none succeed in the way she intended?

13. See the description of the clothing Joan and Isabella planned to don for the torch festival (page 242). The author includes many detailed passages about clothing in The First Princess of Wales. What does clothing represent in this story?

14. The book is filled with the lyrics to the lutenists’ many songs, including those of Joan. What does music mean in The First Princess of Wales? Why is it such a potent form of communication?

15. Queen Philippa admonishes Joan: “Love fades, poor Joan, and then there is only duty and remembrance” (page 578). Do you agree with the Queen’s words? What was the Queen trying to tell Joan?

16. Why do you think Joan and Edward’s love endured for as long as it did? Did their eventual marriage seem like it was well deserved? Why or why not?

17. In the author’s note, the author draws a comparison between Joan and Edward’s epic love affair and that of today’s Prince of Wales, Charles, and his wife, Camilla Parker Bowles. Do you agree with this comparison? What other sets of star-crossed lovers, British royalty or otherwise, can you compare to Joan and Edward?

Learn More About The First Princess of Wales
print

Shadow on the Crown
Patricia Bracewell