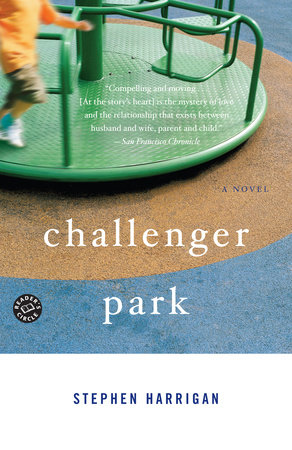 1. Lucy is clearly torn between her dreams of professional achievement and the demands of motherhood. To what extent does her dilemma represent the reality of working mothers in less glamorous–and dangerous–professions?

2. As the novel opens, Lucy is dealing with her son’s asthma attack while her husband, Brian, is in space. The scene foreshadows a more significant attack that young Davis faces when Lucy is in space and Brian at home. How do the two scenes illustrate the Lucy and Brian’s respective roles as parents?

3. The author paints an intimate and detailed portrait of an astronaut’s routine. What did you find most interesting about Lucy’s rigorous training process and her subsequent mission? What surprised you most?

4. In many ways, Walt and Brian seem to represent the two sides of NASA–Walt working consistently behind the scenes, and Brian craving the thrill and attention of actual space travel. What other characteristics make these two men so different from each other? To whom do you relate more? What do you think draws Lucy to Walt

5. As Lucy prepares for her launch, she makes a video for Davis and Bethie, but not one for Brian. What do you think this decision means? If you had to leave a message for your loved ones on the eve of a journey that could end in your death, who would you choose? What would you say?

6. Lucy describes going into space as “holding her children hostage to her dream,” (p. 393), which becomes a clear focus of the novel. Do you think her decision to go is wrong? How much of our dreams and goals should we sacrifice for the sake of our children?

7. Louis and Walt’s friendship is often strained, yet they clearly rely heavily on one another. What makes their relationship so complicated? Does it have anything to do with the fact that Walt is a man of science and Louis a man of faith?

8. Do you regard Lucy’s affair with Walt as something that broadens her life, or as a selfish act that threatens to destroy the fabric of her family?

9. When Lucy learns that she will be up in space for longer than she anticipated, she has the opportunity to communicate with both Walt and Brian. How do the ways in which these two men respond to the sudden crisis reveal the deeper chords of their characters

10. In a particularly poignant passage, the author describes Lucy’s reaction to her prolonged mission: “Tears did not fall in space. Without gravity, they simply hovered at the rim of Lucy’s eyes, gaining volume as she wept, and when she wiped them away they drifted around her head as perfect spheres.” How do such otherworldly details reinforce the emotional core of the novel?

11. At the end of the novel, Lucy must make an important decision–choosing between Walt and Brian. How does her extended time in space affect her decision? Did you agree with her ultimate choice?

The Law of Superheroes
Ryan Davidson and James Daily

The Light-years Beneath My Feet
Alan Dean Foster

Path of the Assassin Volume 7: Center of the World
Kazuo Koike

How to Win
Eva Wong

A Girl’s Guide to Guns and Monsters

Transformers: Till All Are One, Vol. 2
Mairghread Scott
Back to Top