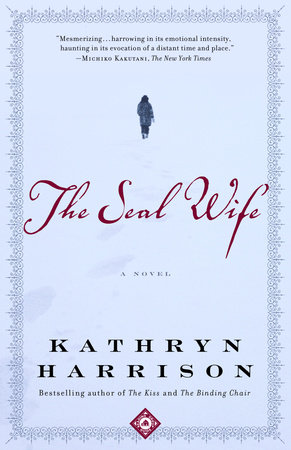 1. Kathryn Harrison has been hailed as a master of “spare narrative”. Why might the prose of The Seal Wife be characterized as “spare”? Discuss examples or particular passages that highlight this quality of Harrison’s writing. What effect does this style have on the novel as a whole, or on your ability to imagine the time and place in which it is set?

2. In The Seal Wife, Harrison explores the relationship between physical and emotional suffering. Bigelow is subject to the harsh Alaskan climate, to which he is unaccustomed, as well as to the simultaneous and profound effects of an unexpected obsession. How do these aspects of Bigelow’s inner and outer lives interact? How does Harrison express the theme of suffering–its causes and consequences–through other characters in the novel?

3. What effect does Bigelow’s realization that the Aleut is not unable to speak, but rather unwilling, have on her overall characterization? Does this understanding affect or alter your sense of the dynamics of their relationship? If so, how?

4. Over the course of the novel, speech (and the lack thereof) becomes a prominent thematic thread. The Aleut allows Bigelow into her home and her bed, but never speaks, though he does so “more volubly to her than . . . to anyone else.” At what other points in the book, and through which characters, is the theme of speech explored? What might Harrison be trying to convey through her use of speech as a link in Bigelow’s relationships, especially with women?

5. Despite the noteworthy dearth of women at Bigelow’s Alaskan outpost, he engages in relationships with several throughout the book. Describe the novel’s key female characters, and discuss the nature of Bigelow’s relationship with each. In what ways are these women different? Similar? How does Bigelow change or grow as a result of these relationships?

6. The various types of power dynamics between men and women–Bigelow and the Aleut, Getz and Miriam, and so on–are at the core of The Seal Wife. Describe and discuss some of the important male/female relationships in the book. What conclusions can you draw at novel’s end about Harrison’s ideas regarding sex and power? In many of the relationships through which the theme of sex and power emerges, there is a direct correlation between speech and power. How do the various qualities of gender, sex, speech, and power interact throughout the book?

7. As much attention as is paid to Bigelow’s inner obsession with the Aleut, equal attention is paid to his professional passion for charting the weather, his obsession with “recording a narrative that unfolds invisibly to most people.” How do Bigelow’s passions correspond to each other? In what ways are they parallel, and in what ways might they be directly related? What effects do these consuming obsessions have on Bigelow? How do they affect his ability to relate to others, understand himself, and achieve his goals?

8. When the heavy sun appears, rolling sullenly along the horizon, it reveals landscapes of unutterable splendor, ice glazing every twig, turning gravel to diamonds, garbage to ransoms. . . . But what he described as grandeur in last year’s letters to his mother and sister now strikes him as threatening, the inlet’s water black and violent, heaving under a mantle of splintered ice.

In such passages, Harrison uses richly metaphorical language to describe the Alaskan landscape as seen through Bigelow’s eyes. While such descriptions provide a vivid sense of setting, they also provoke questions of physical realism versus emotional perspective. How might Bigelow’s literal vision of his surroundings be a reflection or projection of his inner state at any given moment in the book? Find and discuss a few passages throughout the novel that illuminate this relationship. How does Harrison’s depiction of the landscape change in relation to Bigelow’s emotional evolution? What other “realistic” aspects of Bigelow’s surroundings (other characters, professional pursuits, and so on) provide a mirror for his inner narrative?

9. Discuss the title of the novel. In terms of its mythic implications, what might it convey about the story and its characters? A parallel is drawn throughout the book, particularly at its end, between the Aleut and a captured seal. What implications does this comparison have for the outcome of Bigelow and the Aleut’s relationship and story? How might the Aleut’s consistent qualities of self-possession and self-awareness be reconciled with the implied conclusion?

10. Bigelow seems to have achieved a sense of balance and resolve by the end of the novel, a composure at the other extreme of the emotional spectrum from the air of obsession that permeates the book. Discuss the arc of Bigelow’s character development. What does his emotional evolution imply about the relationships between his emotional and professional pursuits? How does he use potentially self-destructive feelings and behaviors to achieve creative success and emotional balance? How do you feel about the end of the novel?

Suggested Reading from the Author

Kobo Abe, The Woman in the Dunes

Mikhail Bulgakov, The Master and Margarita

Malcolm Lowry, Under the Volcano

Edith Wharton, The House of Mirth
Learn More About The Seal Wife
print

While Justice Sleeps
Stacey Abrams
Back to Top