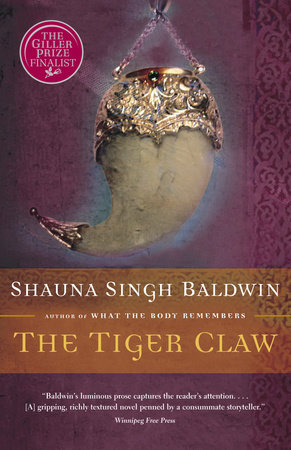 1. Shauna Singh Baldwin once said in an interview, “Fiction is telling a lie in order to tell the truth,” and in The Tiger Claw she has told the story of Noor Khan using more than just the known facts. What can we learn from fiction that can’t be learned from non-fiction? Should imagination be allowed to tell history?

2. Noor assumes many different names — Noor Khan, Nora Baker, Anne-Marie Régnier, Madeleine, Princess Noor — and in some ways she doesn’t seem completely comfortable in any one of them. What do her various identities allow her to express? Which ones suit her most?

3. Noor is often in dialogue with Allah, asking favours, making promises and reaffirming her faith. How does Noor rely on her religious beliefs to motivate herself, explain the actions of others and come to terms with the worst that befalls her?

4. Noor says at one point, “I’m a member of every tribe,” to which Viennot responds, “It’s very dangerous thinking. One must know very definitely to which tribe one belongs.” In what ways does Noor’s allegiance with so many different nationalities and races hurt her? How does it help her?

5. Near the beginning, when Kabir is searching for Noor, he comes across German soldiers wishing to surrender. As he considers what will happen to them now that the war is over, he wonders, “How much retaliation had really been necessary?” From what you know of Kabir’s character, what do you think his answer would be? Would Noor wish for retaliation against her captors?

6. Noor says, “Someone always regulates my surroundings, affecting the air I breathe. Other people’s decisions have governed each moment of my life.” What are some examples of these oppressive forces? In what ways does Noor take her life into her own hands?

7. Herr Vogel, the German officer who keeps Noor hostage is certainly cast as a bad and lascivious character, and yet he also works to give Noor better accommodations and provides the paper on which much of the story is being told. To what extent do Vogel’s kindnesses redeem him of the evil he commits and stands by to witness? Are there other characters in the novel for whom you have ambiguous feelings?

8. Colonization and oppression of peoples, countries and individuals is a driving theme in The Tiger Claw. Noor feels that the British are hypocrites when they denounce German occupation, because they too have been colonizers, in India. What other forms of colonization are present in the novel, and how blind are the various colonizers to their own wrongdoing?

9. Noor is betrayed numerous times in the novel. While in prison, she says, “We all have to believe we’re doing right or we’d kill ourselves.” How would Noor’s various betrayers justify their actions?

10. On one level, The Tiger Claw is a simple love story about a woman who must face obstacles — both small and great — to reach the one she loves. On another level, Noor follows the Sufi path to realization of herself as a woman and as a human being. How does she overcome or accept obstacles? Does love win in the end? Which other characters in the novel are propelled by what they call love?

Fire in the Blood
Irene Nemirovsky

A Palace in the Old Village
Tahar Ben Jelloun

A Change of Time
Ida Jessen

In the Café of Lost Youth
Patrick Modiano

The Flowers of War
Geling Yan

The Beggar’s Pawn
John L’Heureux
Back to Top