In the River Sweet Reader’s Guide 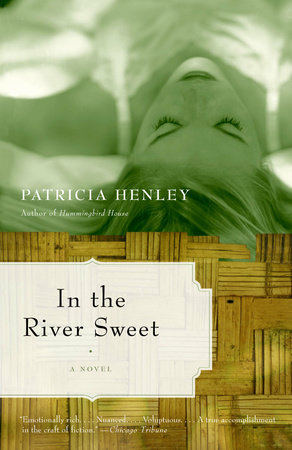 In the River Sweet Reader’s Guide

The questions, discussion topics, and author biography that follow are designed to enhance your group’s reading of Patricia Henley’s In the River Sweet.

From the world of jasmine tea, cyclo drivers and paper lanterns in trees to the heartland of America, Patricia Henley takes us on a journey into the hearts of one woman and her family. It is the story of one woman’s journey to wholeness, as she struggles to embrace her past, her daughter’s lesbianism, and her own spiritual evolution from fundamentalism to mysticism. Ruth Anne Porter and Johnny Bond were engaged to be married when he was sent to Vietnam in the late sixties. She became a volunteer at a French convent in Saigon; he was taken as a POW when Laos fell to the North Vietnamese. They were eventually reunited and married. However, both harbor secrets from that time—while Johnny was a POW, Ruth Anne fell in love with a blind Vietnamese boy and had a son by him whom she left behind. When her grown son contacts her by e-mail, she must decide whether to tell her husband or go on hiding.

With skill and sensitivity, Henley unfolds her narrative around Ruth Anne’s secret and her family’s struggles to come to terms with it. In the River Sweet is a sensitive, beautifully written exploration of family and faith, and of what it means to be moral in a world of conflicting moral codes.

1. In the River Sweet is filled with images of embroidered quotes on banners, engraved quotes on pillars, quotes on t-shirts, lettered signs, graffiti on buildings, short stories, poems, novels, letters, e-mails. What is the importance of the printed word in this novel? How do the different means of printing affect the way the words are perceived? An e-mail instead of a letter? Graffiti on the church wall as opposed to authorized stone etchings?

2. Ruth Anne lives in River County, Indiana and often goes with her husband for romantic picnics by the river. She grew up on Lake Michigan and returns there for meditation and to be close to her dying aunt. While pregnant with Tin, she walks along the China Sea in Vietnam, and years later meets him again near Lake Michigan. What is the appeal of rivers and lakes for Ruth Anne? What is the connection between water, Ruth Anne’s tale, and the title In the River Sweet?

3. In the River Sweet occurs over the course of one summer through flashbacks, primarily Ruth Anne’s. Why has Henley chosen this structure? What is the function of Johnny’s sudden narration? Does his perspective change your view of Ruth Anne or the situation?

4. How has her Midwestern upbringing and community affected Ruth Anne, her personality and desires? How has it influenced her decisions and compromises? Despite the town and church’s disapproval of her daughter, Ruth Anne returns to River County in the end—“it’s where she had the most to learn”? Why?

5. In the River Sweet is primarily a tale about family. Does the definition of family evolve over the course of the novel? What does family mean to Ruth Anne? To Johnny? To Tin?

6. Why is Ruth Anne attracted to Vo? Compare/contrast him to her husband Johnny. How are their relationships different? What binds Ruth Anne to Vo? And to Johnny? Do the events of the novel change, or shift, these ties?

7. Why didn’t Ruth Anne tell Johnny about Vo and Tin? In doing so, did she ultimately betray or protect him? Or was it a mixture of both? What emotional price has she paid for her secret?

8. What does the fishhook poem that Tin sends symbolize? How about the Tale of Kieu with which the novel ends? How do they compare with the Western stories that Vo and Ruth Anne read together? “All literature is hope,” one of the characters says. Do you agree with this quote?

9. Johnny and Ruth Anne respond differently to their daughter’s sexuality and lover. Why the differences? What is it about their personalities, gender, and experiences that influence their reactions? Is one stronger than the other? Do you think they would have responded differently if Laurel were a son?

10. How does the hate crime change/affect each member of the family? Afterwards, why do Laurel and Oceana refuse to press charges? Why must they leave town? Is courage or fear propelling them?

11. What are the various views on organized religion presented in the novel by Father Carroll, Sister Jill, Vo, Oceana? How do Ruth Anne’s feelings about religion and spirituality transform in the novel?

12. How do Johnny’s and Ruth Anne’s opposing opinions on meditation reflect their views on life? What new perspectives does Ruth Anne gain from meditation?

13. “Jill always argued that hearts should be open to each other.” Is this philosophy too naïve? Is it a truth? Do you agree with it—in theory or in practice?

14. This is also a novel about forgiveness. Henley gives the example of the burned Vietnamese girl forgiving and embracing the American pilot who sprayed napalm on her village. What is the meaning of forgiveness? And compassion? What does it mean to be moral in today’s society?

15. How do the minor characters play into the story of the novel? Limbo, and his special relationship with Ruth Anne? Mairead, and her role in Johnny’s summer? Aunt Teensy, and her loneliness, anger, and compromises? Father Carroll, and his dogmatism?

Patricia Henley’s first novel, Hummingbird House, was a finalist for the 1999 National Book Award and The New Yorker Best Fiction Book Award. Henley has also written two books of poetry, Learning to Die and Back Roads, and three story collections: Friday Night at Silver Star, which won the 1985 Montana Arts Council First Book Award; The Secret of Cartwheels; and Worship of the Common Heart: New and Selected Stories. Her stories have been published in such magazines as The Atlantic Monthly, Ploughshares, The Missouri Review, The Boston Globe Sunday Magazine, and Northwest Review, and anthologized in The Best American Short Stories and The Pushcart Prize anthology. Henley lives in West Lafayette, Indiana, where she teaches in the M.F.A. Creative Writing Program at Purdue University.

Roads of the Heart
Christopher Tilghman

The Night of the Comet
George Bishop

The Time In Between
David Bergen

What You Call Winter
Nalini Jones

The Appetites of Girls
Pamela Moses

At the Heart of the Universe
Samuel Shem

The Tiny One
Eliza Minot

Cocksure
Mordecai Richler
Back to Top