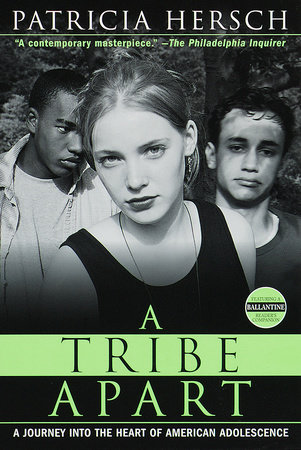 1. With what perception of today’s teenagers did you open A Tribe Apart?
On what were your views based–interaction, media depictions, memories? What opinions underwent the most change during your reading? Which beliefs were confirmed?

2. How does the title of the book’s prologue, Alone, function as one of the work’s central themes? What contributes to the solitude of the teenagers profiled? How does it differ from student to student? What is novel about the loneliness of today’s teenagers? How can a parent or mentor address the matter?

3. A 1989 study by the Carnegie Council of Adolescent Development concluded that every other American teenager faces serious risk, such as unprotected sex, dropping out of school, and substance abuse. What does A Tribe Apart accomplish in putting a face to the statistics? What is the place of a work that attempts a nuanced discussion of complex issues in a culture enamored of the quickness and neatness of numbers and summaries?

4. To tell the story behind the statistics, Patricia Hersch employs many devices of writing we often associate with the genre of fiction: narrative arc, strong character development, and detailed setting, among others. How does A Tribe Apart challenge your view of nonfiction? What is gained–or lost–in borrowing devices from fiction?

5. Often we value works of nonfiction for their dispassionate treatment of subject. Subjectivity, however, seems inescapable. What sort of objectivity does Hersch achieve in her work? In what ways does the author’s character surface in her writing? How does such authorial presence illuminate or obscure the work?

6. What does each individual profile reveal about the role that families, schools, and friendship play in shaping an adolescent’s character? Can one influence compensate adequately for the absence or brokenness of another?

7. While crises and dramatic moments tend to receive attention in a young person’s life, the significance of the day’s quieter moments is often overlooked. What connection between the quotidian and the critical does A Tribe Apart proffer?

8. Rebellion appears as an important lost outlet for today’s adolescents, given the absence of adults and clear boundaries of conduct. What is the result of such an absence? What fills the void? Is a return to definitions of ethical and moral behavior possible in these seemingly relativistic times? What relationship do you perceive between adult morality and adolescent morality?

9. One is tempted to regard as anomalous some of the experiences chronicled in A Tribe Apart. What prevents one from accepting these eight lives as representative? In what is our tendency to deny the reality and relevance of these lives rooted?

10. What does A Tribe Apart reveal about the role music and film play in shaping a young person’s perspective on sex and other supposed doorways to the adult world? Is entertainment a red herring, or is its influence considerable?

11. What portrait of adults emerges from your reading of A Tribe Apart? Do you perceive individuals caught up in dizzying societal changes while trying to navigate the trying paths of parenthood? Or are people incapable of or unwilling to move away from a perilous selfishness to acknowledge their weighty responsibilities? Which parents appear to succeed?

12. Discuss the credibility of the events comprising the lives chronicled. How does Hersch handle the adolescent’s predilection for rendering his or her life in dramatic terms? What sections of the book prove more resonant? Why?

13. Consider your teenage years in light of the lives depicted in A Tribe Apart. What trials remain consistently at the heart of the adolescent experience? What trials strike you as unprecedented? What complicating factors have moved from the margins to the center of the passage? Do you perceive recognizable cycles and shifts more than abstruse, novel challenges? What is the role of your past in understanding the lives chronicled here?

14. Given the emotional range of A Tribe Apart, discuss the book’s tone. Is it consistent, or does Hersch shift tone throughout to fit the tenor of the subject at hand? Point to passages of either harmony or discord between subject and expression and discuss the effect.

15. What aspects of the teenage experience most resist explanation? What mysteries persist despite Hersch’s exacting inquiry? Did you put down A Tribe Apart believing more or less in the precariousness of adolescence?

16. A Tribe Apart raises the red flag of a dangerous absence of dialogue between teenagers and adults. Propose possibilities for undoing the disconnect. What is the role of the individual in initiating such change?

17. What connection do you perceive between the risks taken by the teenagers of A Tribe Apart and the escalating violence at schools throughout the country? Are the students killing students a tribe apart from the teens depicted here?

18. Discuss the role of gender, race, class, and family structure vis-à-vis the lives chronicled in A Tribe Apart.

19. Did you put down A Tribe Apart with a measure of despair or of hopefulness? Do you perceive the society depicted here as moving in a linear fashion toward greater disconnect with its adolescents, or is there reason to believe that a pendulum motion, that is, a return to meaningful engagement with teens, is possible?

20. In her epilogue Hersch writes that among the adolescents profiled, those who manage best "have a strong interactive family and a web of relationships and activities that surround them consistently." What changes must take place on both an individual and societal level to put this web in place for more teenagers?

Learn More About A Tribe Apart
print
Back to Top