Thorn in My Heart Reader’s Guide 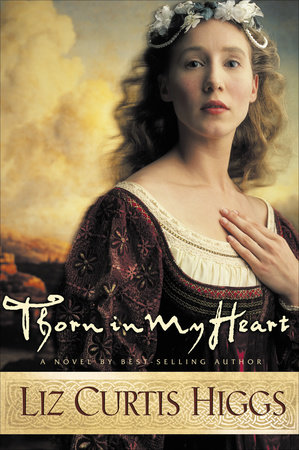 Thorn in My Heart Reader’s Guide

1. Rowena McKie appears through only the first seven chapters of the book, but her influence is felt throughout the story. In what ways does she shape Jamie’s past, present, and future? What, if anything, makes her a sympathetic character? How is she like her brother, Lachlan, and how is she different?

2. Rowena clearly considers her deceptive plan to be necessary. How does she justify her actions? What does her behavior reveal about her relationship with her husband, Alec? And what of her other son, Evan? How has she convinced herself that he deserves such ill treatment?

3. To what extent is a man like Jamie McKie—heroic one minute, cowardly the next—a believable character? When does Jamie behave heroically, and when do his weaknesses surface? How would you describe his overall character? What changes take place in Jamie’s character from the first chapter to the last, and who or what brought about those changes?

4. Rowena favors Jamie; Alec favors Evan. Can you recall specific examples of parental favoritism evident in Lachlan’s treatment of Leana and Rose? And how do the sisters respond to their father in distinctive ways?

5. Leana McBride has many positive qualities, but she is by no means perfect. What are her strengths, and what are her weaknesses? To what extent is she a heroine? a victim? a fallen woman? Regarding her relationship with Jamie, is she naive? foolish? obsessed? What outcome were you hoping for in Leana’s life?

6. Rose and Leana are vastly different—as opposite as Evan and Jamie—yet the sisters have a much healthier relationship. What words would you use to describe young Rose, and how did you feel about her as you got to know her? Did your opinion of her alter as the story unfolded? Which scene struck you as most true to life for two sisters living under the same roof?

7. Despite Lachlan McBride insisting, “There are to be no saicrets in this household,” Auchengray overflows with secrets. What secrets does Leana keep? What are Jamie’s secrets? And Rose’s? As for Lachlan, secrets, lies, and deception are his currency, used to manipulate and coerce. How might you explain Lachlan’s need to control the lives of those around him?

8. The epigraphs that introduce each chapter were carefully chosen. My personal favorite is the Scottish proverb, “A winter’s night, a woman’s mind, and a laird’s purpose aften change.” For you, which quote best captures the essence of the novel, and why?

9. On her wedding night, Leana convinces herself she must climb into Jamie’s bed. Were you surprised by her decision? appalled? Which, if any, of the reasons she offers in chapter 48 are valid? Did you find yourself scolding her…or rooting for her? What motivation, above all others, sent Leana tiptoeing into Jamie’s room to “seek his blessing”?

10. When he was a lad of seventeen, Robert Burns wrote:
Such was my life’s deceitful morning,
Such the pleasures I enjoy’d!
But lang or noon loud tempests, storming,
A’ my flowery bliss destroy’d.
Jamie McKie might have penned those very sentiments himself on the first day of 1789. Why is Leana the target of his anger? How would you describe Lachlan’s conduct toward Jamie that morning? Who is most to blame for this tragic turn of events—Lachlan, Jamie, or Leana? Even though she is not on the scene until later, how might Rose have contributed to this debacle?

11. Neda and Duncan Hastings both serve as a moral compass for the story. Especially in chapters 59 and 67, how do they provide a sense of true north for Leana and Jamie? In what other scenes do Neda’s willing ear and Duncan’s ready wisdom offer much needed direction and stability?

12. At what point in the story did the significance of the title, Thorn in My Heart, come alive for you? Leana eventually defines that thorn as her love for Jamie—“the love that would not stop”—but each character could claim to have a “thorn” in his or her heart as well. What might Rose’s thorn be? And Jamie’s? What thorns press upon Lachlan? Rowena?

13. Three hundred years ago Matthew Henry wrote, “Whom God loves he never leaves.” That same truth, inspired by Genesis 28:15, echoes throughout the novel: I will never leave you. Even when Jamie’s behavior is less than honorable, those words from his heavenly dream keep coming back to him. How does Jamie react each time he remembers that assurance? How might those words encourage you in your own spiritual journey?

14. Leana came to a point of desperation before she came to a place of peace. What is the “dark moment,” the lowest point of Leana’s trials? When does she begin to climb out of that darkness and move toward the light of hope? How does Rose aid her sister in that painful process of maturing? And how does Rose hinder Leana’s efforts?

15. In desperation, Jamie prays, “Please, God, help me love her in return.” What evidence do you see of such love for Leana in the final chapter of the novel? What does he say to her that suggests his heart is changing? What is his relationship with Rose at story’s end? Which issues and conflicts are resolved by the last page, and which are merely on hold? What might the future hold for this thorny triangle?

16. The one constant that permeates the story from beginning to end is bonny Scotland itself. Which passage in particular brought the Scottish Lowlands of the eighteenth century to life for you? In what ways are time and place critical to the telling of this story? In what ways does Thorn in My Heart transcend time and place?

Learn More About Thorn in My Heart
print

Though My Heart Is Torn
Joanne Bischof

The Road to Paradise
Karen Barnett

Back in the Saddle
Ruth Logan Herne

Two Brides Too Many
Mona Hodgson

What Once Was Lost
Kim Vogel Sawyer

Reservations for Two
Hillary Manton Lodge
Back to Top