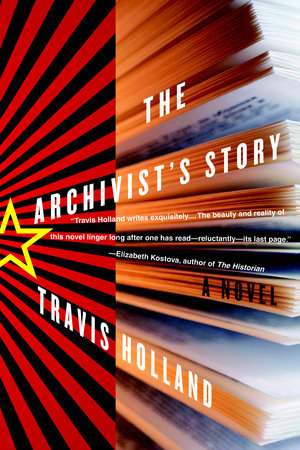 A stirring tribute to the power of the written word, The Archivist’s Story spins a brilliant “what-if,” inspired by the mysterious lost manuscript pages of Russian short-story master Isaac Babel. Assigned the grim task of destroying books at the infamous Lubyanka prison, Pavel Dubrov is startled to find himself face-to-face with Babel one day, when the authorship of a text comes into question. A former literature teacher, now reduced to functionary work in the aftermath of a slander incident, Pavel is forced to destroy the pages of the beloved fiction he once taught in the classroom. He has lost even more than literature; his wife has died, his mother is ill, and his friends are caught in the ruthless machine of Stalin’s purges. But meeting Babel sparks a new mission: He will smuggle out portions of the genius storyteller’s work, risking his life so that masterpieces might live.

The questions and discussion topics that follow are intended to enhance your reading of Travis Holland’s The Archivist’s Story. We hope they will enrich your experience of this haunting novel.

1. Discuss Travis Holland’s storytelling style. How were you affected by his use of the present tense to describe lives that are overshadowed by the past?

2. What did the initial encounter between Pavel and Babel reveal about both men, and about the way they perceive literature? Are there authors whom you revere as much as Pavel reveres Babel?

3. What does it mean to live free from censorship? How did Stalin’s literary purges shape the social climate of the Soviet Union? Is any degree of government-sponsored censorship appropriate?

4. Pavel recommends Chekhov’s story “Gooseberries” to his mother in Chapter Seven. What does her response to the story–particularly her concern that Ivan Ivanovich’s brother will eventually realize the bitterness of the berries–indicate about her view of the world? How does her illness shape Pavel’s outlook for the future?

5. How was your reading of The Archivist’s Story influenced by the knowledge that the story of Isaac Babel’s imprisonment and confiscated manuscripts is real? In what ways can fiction sometimes recall history more vividly than nonfiction does?

6. How familiar were you with the Russian literary works referred to throughout the novel? What traits do you associate with Russian writers, and how do those traits differ from your impressions of American writers? What is it like to read this novel, which captures life behind the Iron Curtain in the 1930s, in the aftermath of perestroika and the fall of the U.S.S.R.?

7. What ultimately inspires Pavel to risk his life to save a portion of Babel’s works? What does his courage illustrate about the value and political nature of literature? What does a nation’s fiction say about its history and culture?

8. Discuss Pavel’s memories of his wife, Elena, and his poignant quest to claim her ashes. Would you have believed the official version of the accident’s cause? How did the nature of her death complicate his ability to grieve for her?

9. What common ground do Pavel and Natalya share? Do they feed each other’s hungers, or are their emotional cravings impossible to satisfy?

10. What has kept Pavel resolute in his friendship with Semyon? Which one of them is more courageous? Which one is the better realist?

11. What is the significance of the archive at Lubyanka Prison? How would you define the role and purpose of archives–literary, presidential, or otherwise? Who should have access to them? Why do they matter?

12. Pavel cannot shake the memory of the slander he committed against his former colleague Mikhail. What compelled Pavel to go along with his student? Would you have been equally persuaded in similar circumstances?

13. In the novel’s closing chapters, Pavel has little left to lose and is resolute in his plan. As he retrieves his hidden items from the basement wall and imagines the ominous car coming for him, what is he leaving behind? What will be gained by his fate?

14. In what ways did Travis Holland resurrect Babel just as Pavel hoped to do? Is it the nature of authors to contribute to one another’s immortality?

The Eye of the Leopard
Henning Mankell

Whose Little Girl are You?
Bethany Campbell

Among the Missing
Morag Joss

You Know Who You Are
Ben Dolnick

The Confabulist
Steven Galloway
Back to Top