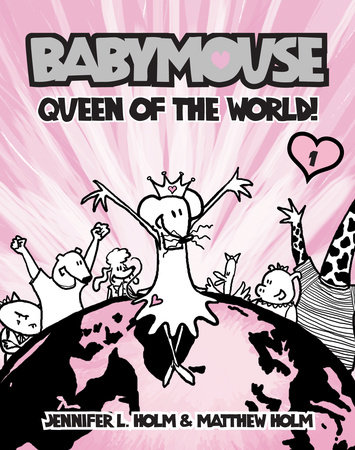 An Introduction to the Books
Babymouse lives in two worlds. In her day-to-day existence, she longs for excitement and travel. What she gets, however, are dodgeball games, a recalcitrant locker, and garbage detail at home. In her dream world, though, Babymouse assumes secret identities, solves mysteries, and generally wins the praise and adulation of her peers. Babymouse has an active imagination, one that frequently gets her into tough situations at school and at home. Somehow she manages to triumph by the end of each story and stay true to herself.

Where is the glamour, the excitement, the adventure? As she heads off to school, Babymouse wonders daily when her drab life will become less boring. Perhaps an invitation to Felicia Furrypaws’s birthday party will be the ticket out of Boredomville.

Brother-and-sister team Matthew Holm and Jennifer L. Holm grew up playing with stuffed mice. Today Jennifer is the author of several highly acclaimed novels, including Penny from Heaven and the Newbery Honor Book Our Only May Amelia. Matthew is a graphic designer and freelance writer. Neither of them has mice, although Jennifer has a small son who likes cheese a lot and Matthew has a weasel.

Q: Where was the idea for Babymouse born?
A: Jenni grew up surrounded by boys and their comic books, and she wanted to create a comic book of her own. After a particularly tough day at work, she had an image in her head and came home and scribbled down a picture of an irritated mouse on a napkin–bow in her hair, heart on her dress, hands on her hips. She gave the sketch to Matt, who had been drawing cartoons for a long time, and asked if he wanted to collaborate with her on the project.
Q: How does the partnership for Babymouse work? Do pictures or story come first?
A: We work very closely on Babymouse–even though we live a good seven-hour drive away from each other! (There’s a lot of e-mail and FedEx involved.) The story for Babymouse always comes first. We bat around general ideas for the books–Babymouse at her school concert, Babymouse going to the beach, etc.–and then Jenni writes the manuscript. She writes it in a storyboard format, noting in each scene what the characters say, what the narrator says, and what action takes place. Matt then makes suggestions of his own, and we send it to the editors at Random House for their thoughts. Once everyone is satisfied with the manuscript, it’s on to drawing! Matt actually draws each Babymouse book three times. First, he draws quick thumbnail sketches with pencil in a sketchbook. Then he sends those drawings to Jenni, who cuts and pastes them into a rough layout. Then Matt takes those layout pages and re-draws them at full size on sheets of paper with Sharpie markers. We send these to Random House, and after we hear their suggestions, Matt draws the final versions of the pages on his computer using a special drawing tablet. He also adds all of the pink at this stage.
Q: Why are graphic novels a good format for younger readers?
A: For both of us, comics served as a nice bridge between picture books and longer novels without pictures. Another great thing about graphic novels is the fact that no one–and especially not kids–wants to read some serious novel every single day. Graphic novels help develop a nice reading habit.

Art–
All of the Babymouse books can be studied in art class.
Ask students to consider some of the following questions:
What are the colors that predominate the illustrations?
Why do you think the illustrator elected to use these colors?
How do the illustrations convey the mood and emotions of the characters?
How does the illustrator let readers know that Babymouse is daydreaming and that what is happening is not real?

English–
In English class, all of the Babymouse books can be used as models for writing. For example, students can analyze how the author develops a character. Divide students into groups and assign each group a different character (Wilson, Felicia, Babymouse, etc.). Then have each group brainstorm different words and adjectives that can be used to describe each individual character.

Teach Character Traits with Babymouse!
Babymouse can assist in highlighting those character traits that educators want to see in their students. Use the ideas below as a jumping off point.
Fairness–In Queen of the World!, Babymouse lets Felicia Furrypaws take credit for her book report in exchange for being invited to her slumber party. How is Babymouse being unfair to her teacher, her classmates, and herself by giving in to Felicia Furrypaws? Ask students about a time they were treated unfairly and how it made them feel.
Self-Respect–The slumber party does not live up to Babymouse’s expectations in Queen of the World! Babymouse realizes that she already has so much–good books to read, sassy style, and a true best friend.
She comes to respect herself and realize that she is a queen already! Ask students what they respect about themselves and why. A call-out box in Rock Star says, “She may have been last chair, but Babymouse still had big dreams.” What does it say about Babymouse that she is happy with herself even if she is in last chair or second to last chair in the flute section?
Tolerance–In all four books, Babymouse’s standard response to things not going her way is “typical.” She learns to tolerate the fact that life isn’t perfect. What are the little things that bother your students and why?

Talking About Babymouse:
• Even though the characters in the Babymouse books are animals, they do possess some very human character traits. Ask students to brainstorm individually or in small groups those traits that Babymouse and her fellow characters share with humans. What emotions do they share with Babymouse and Wilson and the other characters? Students can also discuss how they might handle some of the situations in the novels differently than the characters. How might they handle Felicia Furrypaws differently? Would they treat queak the same way as Babymouse? How might they deal with the cranky locker? Or the math teacher?
• Babymouse has an active and vivid imagination. In each of the books, she escapes from untenable situations by drifting off into a daydream. Divide the class into four groups, one for each book, and ask each one to identify the fantasy sequence or sequences in their assigned book. After students have identified the sequences, have them connect the fantasy to the incident that initiates it in the story. For example, in Queen of the World!, one of the fantasy sequences involves Babymouse challenging a giant squid. The incident that initiates it in the story is Wilson’s mention of the movie they will watch Friday night, The Invasion of the Giant Squid.
• In addition to there being an initiating incident for each of the fantasy sequences, Babymouse’s daydreams are often populated with people from her actual world and even objects from her own reality.
Why does the author choose to combine reality and fantasy? How might this combination assist readers into entering into Babymouse’s world more readily? Ask students to also note when the author uses some form of a character’s name in the fantasy world (e.g., Squeakgore in the Frankenstein sequence, Babymouserella in the Cinderella sequence, etc.)
• In a graphic novel, the format plays a significant role in the telling of the story; while there is text, some of the story is told through the illustrations. Ask students to discuss which elements of the story are told in traditional words and which elements are relayed more in the pictures. What information is conveyed only in text? Only in the illustrations? In both the text and the illustrations? • Often authors will select character names to help convey something about that particular character. This is the case for many of the characters in the Babymouse books. Ask students to predict, before they read, what they think each character will be like based upon their names. Why is the main character called Babymouse? What does that tell us about her physically and perhaps emotionally as well? Does Felicia Furrypaws’s name tell us much about what sort of character she will be? How about Babymouse’s brother, Squeak? Wilson the Weasel?
• Divide students into four groups and have each group read one of the Babymouse books. Then, mix up the groups so that each new group is comprised of at least one person who has read each of the four books. In these new groups, have students list the similarities and differences between and among the books. After this discussion has taken place, students can also be instructed to write a brief paper comparing and contrasting the books. A variation of this activity would be to have pairs of students discuss similarities and differences between only two of the books.
•Given the format of the novels, it makes sense that Babymouse and her friends can become animated players in a cartoon series or even a movie. Ask students to cast the roles of the major players: Babymouse, Felicia Furrypaws, Wilson, Squeak, Penny Poodle. What actors/voices would bring these characters to life? Students should be able to provide reasons for their choices. Additionally, students can create the poster or ad that would be used to promote the TV show or series. What would it be rated and why?

“A new hero emerges in . . .Babymouse. Graphic novels for the early elementary set are rare, and this humorous and adventurous series will be snapped up.”–THE BULLETIN


Learn More About Babymouse #1: Queen of the World!
pdf

Hilda and the White Woff
Stephen Davies and Luke Pearson