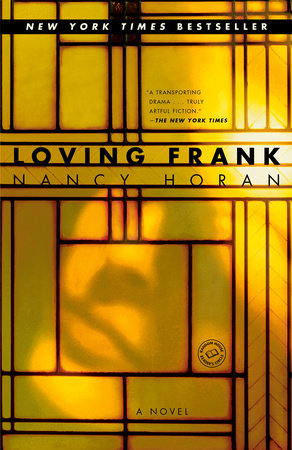 1. Do you think that Mamah is right to leave her husband and children in order to pursue her personal growth and the relationship with Frank Lloyd Wright? Is she being selfish to put her own happiness and fulfillment first?

2. Why do you think the author, Nancy Horan, gave her novel the title Loving Frank? Does this title work against the feminist message of the novel? Is there a feminist message?

3. Do you think that a woman today who made the choices that Mamah makes would receive a more sympathetic or understanding hearing from the media and the general public?

4. If Mamah were alive today, would she be satisfied with the progress women have achieved or would she believe there was still a long way to go?

5. In Sonnet 116, Shakespeare writes, "Let me not to the marriage of true minds/Admit impediments. Love is not love/That alters where it alteration finds. .." How does the relationship of Mamah and Frank bear out the sentiments of Shakespeare’s sonnet? What other famous love matches fill the bill?

6. Is Mamah’s story relevant to the women of today?

7. Is Frank Lloyd Wright an admirable figure in this novel? Would it change your opinion of him to know that he married twice more in his life?

8. What about Edwin Cheney, Mamah’s husband? Did he behave as you might have expected after learning of the affair between his wife and Wright?

9. Edwin’s philosophy of life and love might be summed up in the following words from the novel: "Tell her happiness is just practice. If she acted happy, she would be happy." Do you agree or disagree with this philosophy?

10. "Carved over Wright’s fireplace in his Oak Park home are the words "Life is Truth." What do you think these words mean, and do Frank and Mamah live up to them?

11. Why do you think Horan chose to give her novel the epigraph from Goethe, "One lives but once in the world."?

12. When Mamah confesses her affair to her friend Mattie, Mattie demands, "What about duty? What about honor?" Discuss some of the different meanings that characters in the novel attach to these two words.

13. In analyzing the failure of the women’s movement to make more progress, Mamah says, "Yet women are part of the problem. We plan dinner parties and make flowers out of crepe paper. Too many of us make small lives for ourselves." Was this a valid criticism at the time, and is it one today?

14. Why does seeing a performance of the opera Mefistofele affect Mamah so strongly?

15. Why is Mamah’s friendship with Else Lasker Schuler important in the book?

16. Ellen Key, the Swedish feminist whose work so profoundly influences Mamah, states at one point, "The very legitimate right of a free love can never be acceptable if it is enjoyed at the expense of maternal love." Do you agree?

17. Another of Ellen Key’s beliefs was that motherhood should be recompensed by the state. Do you think an idea like this could ever catch on in America? Why or why not?

18. Is there anything that Frank and Mamah could have done differently after their return to America that would have ameliorated the harsh welcome they received from the press? Have things changed very much in that regard today?

19. What part did racism play in Julian Carlton’s crime? Were his actions the product of pure insanity, or was he goaded into violence?

The True Story of Hansel and Gretel

The Swans of Fifth Avenue

Lucky Us
Back to Top