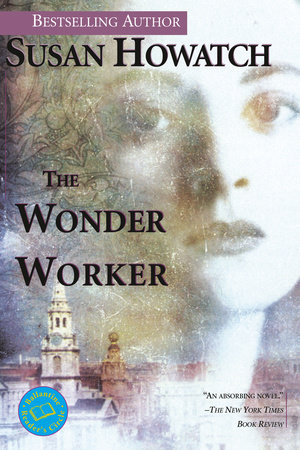 Young, lonely, and insecure, Alice Fletcher is on the verge of emotional collapse when she stumbles into St. Benet’s Church to dodge the London drizzle. There, she witnesses a group of gifted healers led by the charismatic Nicholas Darrow. Gaining refuge at last, Alice is drawn–inexorably, seductively–into the complex network of relationships at St. Benet’s healing center–as she falls immediately, dangerously, in love with Darrow himself.

Yet Darrow and his cutting-edge clergy are not all what they seem. And while Nicholas’s dazzling powers now threaten to ruin all he attempts to save–including his own disturbed marriage–Alice’s devotion to him deepens. Then a  devastating tragedy transports her to the shocking center of truth. Yet fueled by her love for Nicholas and a boldly emerging intuition, she will hold together the lives spinning wildly out of control–as she herself is transformed forever.

"Susan Howatch’s novel is a journey through the dark side of priestly egos, past the twists and turns of their needs and addictions to power."
—Florida Times-Union

"What would life be without Nicholas Darrow, [his] sidekick, Lewis Hall, perennially unsettled Venetia Flaxton?…Happily, all three are back in The Wonder Worker….Howatch is unsurpassed."
—Newsday

"She does it again in The Wonder Worker…. By book’s end, you care so much about these lives….One hopes that this is the start of yet another great series."
—The Cleveland Plain Dealer

"Combining romantic fiction with an exploration of both Christianity and the labyrinths of the human spirit seems an almost impossible task, but time and time again Howatch has pulled it off…. She walks right into both the bedroom and the inner sanctum of the soul."
—Washington Post Book World

"The plot of The Wonder Worker has many twisting corridors and locked rooms. It is a testament to Howatch’s skill as a storyteller that she manages to hold her diverse cast together without losing her narrative’s drive."
—Chicago Sun-Times

"She has a special kind of courage to bring ministers and their calling to center stage, allowing them to err, to fail and to succeed. . . ."
—Detroit News/Free Press

"Susan Howatch is back on familiar turf…[a] novel of emotional, psychological and spiritual exploration."
—The New York Times Book Review

"[A]dmirers…will be in for a surprise….a busy but beautifully managed story. One admires her for the courage…perhaps she’s trying to be a wonder worker herself."
—Booklist

"Here she darkens her pallette and addresses the dangerous side of ecclesiastical passions…the self-delusions to which priests are susceptible as the deal with their own humanity."
—Publisher’s Weekly

1. This book is told from the point of view of four different characters. Do you think the author favors one character over another? If so, why and how? Which character do you feel the greatest connection with?

2. Alice is a Cordon Bleu chef with an eating disorder, which means that her greatest talent is linked to her greatest weakness. Do you see this as a theme with any of the other characters?

3. Alice’s aunt doesn’t seem to have given her a good sense of self-esteem, and yet Alice shows a very strong sense of duty in taking care of her. Do you see this as admirable, or as something that deprives her of her own personal growth? How would you act in a similar situation?

4. Rosalind refers to America enviously as "a culture where it was socially acceptable for angry people to scream with rage" as opposed to the stiff-upper-lip tradition of Britain. Do you think this is a fair characterization of either country? If so, how do these differences affect women’s lives in particular?

5. The friendship between Nicholas and Lewis seems more durable than any of the friendships between women in this book; for instance, between Rosalind and Francie. Why do you think this is so?

6. Why do you think Francie makes untrue allegations against her husband? Do you see her as a victim or a perpetrator? Is she being manipulative, or do you think her actions are excusable because she is disturbed?

7. What is the significance of Nicholas’s toy bear? What does it mean for him as a child? What relevance does it have for how he treats people as an adult?

9. The novel differentiates between being an "honest Christian healer" and a "shady, manipulative wonder worker," yet the title suggests that Nicholas might be more of the latter than the former. Do you think this is true? What are the differences you see between the two?

10. There is a lot of speculation about the reasons for Stacy’s death. Why do you think he commits suicide?

11. Who do you think is stronger–Alice or Rosalind? Why?

12. Traditionally, religious figures are expected to be above sexual temptation, but all of the men of St. Benet’s-by-the-Wall struggle with their sexuality. Lewis struggles with his celibacy; Stacy struggles with his sexual orientation; and Nicholas struggles with the attraction women have for him. What do you think the role of sexuality in a clergyman’s life should be?

13. Nicholas is portrayed as the highly charismatic center of a small religious community–a role that has come to be viewed very suspiciously these days. Overall, do you think Nicholas’s depiction in the book is more positive or negative?

14. What experiences have you had personally with highly charismatic figures, religious or otherwise? How did you react to them? Did you trust them as much as most people seem to trust Nicholas?

15. What do you think the reasons are for the breakup of Nicholas and Rosalind’s marriage? Do you think it was inevitable? Is there anything either of them could have done to prevent it?

16. Rosalind has kept important parts of her life secret from her husband, Nicholas, because she feels he isn’t really paying attention to her. Do you think she was right to do so?

17. The book shows Nicholas using his psychic abilities three times–the first with Alice and her aunt, the second when he hypnotizes his wife, and the third when he "exorcises" Francie. In each case, he oversteps what might be considered proper behavior, but with very different results. When and how are his uses of his psychic powers beneficial? When and how are they destructive? What does this say about the risks of charismatic healing? What are the ethical questions involved in this sort of work?

18. What role do religion and spirituality play in the lives of the various characters? How does their belief (or lack of it) in God affect their relationships with others?

Susan Howatch was born in 1940. She obtained a law degree from London University and then immigrated to the United States, where she lived for eleven years. During that time she wrote eight novels, including her international bestsellers, Penmarric and The Wheel of Fortune. In 1980 she returned to England, where she began to study Church history. The result was the six novels that make up the Starbridge series. In 1993 she made headlines by funding a lectureship in theology and natural science at Cambridge University.
Learn More About The Wonder Worker
print

The King Is Dead
Jim Lewis

The Bridge on the Drina
Ivo Andric

The Informers
Juan Gabriel Vasquez
Back to Top