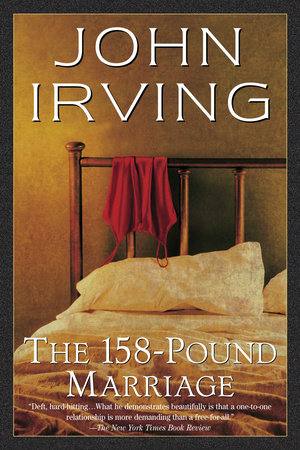 1. How would you describe the significance of the title?

2. Do you consider the narrator of The 158-Pound Marriage to be "reliable"?

3. In The Imaginary Girlfriend, John Irving’s memoir of his life as a writer and a wrestler, Irving says that he once had the following Graham Greene quote taped to his desk lamp: "Hatred seems to operate the same glands as love: it even produces the same actions." How would you describe the intersections of love and hate in The 158-Pound Marriage?

4. In introducing his work as a historical novelist, the narrator says, "For history you need a camera with two lenses — the telephoto and the kind of close-up with a fine, penetrating focus. You can forget the wide-angle lens; there is no angle wide enough." How do the narrator’s background and perspective as a historical novelist influence his account of this story?

5. The 158-Pound Marriage, like several other John Irving novels, takes place on a New England campus. Do you see the academic setting as incidental or as representative of the novel’s mood or themes?

6. We hear a lot about the narrator’s conflicted feelings regarding Severin Winter, but much less about the relationship between Edith and Utch. How would you characterize the nature and development of the women’s relationship?

7. For all of the coupling and communal activities in the novel, each of the four central characters also spends a great deal of time pursuing solitary activities — from walking at night to writing books. What role does solitude play in the novel?

8. What do you make of Severin Winter’s role as a wrestling coach, and of the narrator’s attention to it?

9. What kind of metaphors does the novel propose the world of wrestling has for human relationships?

10. In many instances we see the value of protecting others held above the need to save oneself — from Utch’s mother hiding her young daughter in the cow to the militaristic surveillance of the Benno Blum Gang. What does the novel suggest about the challenges and virtues of putting our loved ones before ourselves?

11. There is much discussion about whether this marital arrangement is based on sex or not. Do you think there is an answer to this controversy?

13. At one point the narrator refers to Severin Winter as "a firm believer in the past." What role does the past — memories, nostalgia, regret — play in the novel? How do the characters’ approaches to the past and to the future differ?

14. The couples’ four children are strikingly absent for most of the novel. The narrator says, "I admit my own sense of family suffered from our foursome. I remember the children least of all, and this bothers me." What is the point of making the children such peripheral characters?

15. The narrator makes a number of statements about the relationships between the children and their mothers, including: "I think Severin thought about his mother too much" and "Edith and I were brought up unsure of ourselves as snobs — in love with our mothers’ innocence." How are the various mothers in the novel portrayed?

16. What does Fiordiligi and Dorabella’s bathtub accident represent for the two families?

17. If you were to write an additional chapter — Chapter 11 — what do you imagine happening to each of the characters and to the two couples?

18. If you have read other John Irving novels, were there any elements of The 158-Pound Marriage that you recognized? How does it compare in tone and scope to his earlier and later work?

19. One way to read The 158-Pound Marriage is as a kind of social experiment in which many of the principles of monogamy and marriage are challenged as a way of shedding new light on the institution of marriage. What are your thoughts about this approach to the novel?

20. Do you think The 158-Pound Marriage has "a moral" or any prescriptive applications?

Learn More About The 158-Pound Marriage
print
Back to Top