The River Where Blood Is Born Reader’s Guide 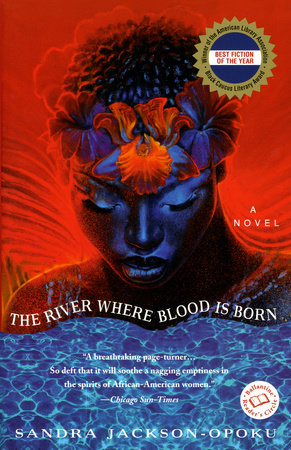 The River Where Blood Is Born Reader’s Guide

print
The River Where Blood Is Born Reader’s Guide

This astonishing novel takes us on a journey along the river of one family’s history, carving a course across two centuries and three continents, from ancient Africa into today’s America. Here, through the lives of Mother Africa’s many daughters, we come to understand the real meaning of roots: the captive Proud Mary, who has been savagely punished for refusing to relinquish her child to slavery; Earlene, who witnesses her father’s murder at the hands of the Ku Klux Klan; Big Momma, a modern-day matriarch who can make a woman of a girl; proud and sassy Cinnamon Brown, whose wild abandon hides a bitter loss; and smart, ambitious Alma, who is torn between the love of a man and the song of her soul.

In The River Where Blood Is Born, the seen and unseen worlds are seamlessly joined–the spirit realms where the great river goddess and ancestor mothers watch over the lives of their descendants, both the living and those not yet born. Stringing beads of destiny, they work to lead one daughter back to her source. But what must Alma sacrifice to honor the River Mother’s call?

1. How critical is the role of Ananse, the spider of African myth, to the preservation of the cultural wisdom of the ancestors? Is there a contemporary counterpart to Ananse in the lives of the current daughters of the African Diaspora?

2. Discuss the importance of blood as a symbol in the novel. What does blood have in common with the river, both literally and metaphorically? Explain the book’s title, The River Where Blood Is Born.

3. In The River Where Blood Is Born, spiritual strength and Mother Wit serve to guide the descendants on the journey from Africa to modern America. Discuss the instances of otherworldly guidance or divine visitations presented in the novel. Is the author effective in depicting these experiences in the book?

4. The character Proud Mary epitomizes the pride and persistence of many enslaved mothers in the harsh captive years, enduring a life of brutal torment and hardship. Was her punishment for her defiance typical for that bitter time? Can you identify other female characters in African-American literature who suffered a similar fate? Contrast and compare their experiences.

5. Earlene’s father plays a significant role in her emotional development, notably after her separation from her mother at an early age. His murder by Klansmen alters the course of her life in many subtle and obvious ways. Could Earlene, as one of the novel’s "lost daughters," be considered one of the weak links in the ancestral line?

6. The cultural archetypes of the female characters–Big Momma, Cinnamon, and Alma–are familiar to readers of modern African-American literature. How has the author made these familiar character types unique?

7. The novel’s complex, intricately nuanced plot structure is carefully crafted. How has the author managed to keep the novel’s pace from slowing? Which characters seem most fully realized to you? Why?

8. The novel deals extensively with the adverse effects of white racism on the lives of the women. What themes are explored through these interactions? What does the novel suggest about the nature of these women confronted and often oppressed by bigotry?

9. Big Momma speaks of a woman’s need for emotional independence despite an obligation to be an active part of the world and in the lives of others. Even in romantic love, she stresses the idea: "I ain’t never told you don’t like menfolk. Love them. Love them with the fullness of your heart. But don’t never make yourself into somebody else’s woman. You ain’t nobody’s woman but your own." (pg. 176) What is the deeper meaning in her words?

10. Reviewers have cited The River Where Blood Is Born for its insightful mix of the spiritual world and the physical world, along with an unique historical perspective of Black America. Do you agree? Does this added dimension of the seen and unseen give the novel more richness and depth? Are there other similar books in the African-American literary canon?

11. In the classic epic multigenerational novel, several pivotal scenes define the basic character of the entire work. Which scenes in The River Where Blood Is Born best exemplify its core themes? What are those core themes?

12. The River Where Blood Is Born explores many forms of love through the various characters of Big Momma, Earlene, Cinnamon, and Alma. How do the individual characters reflect the inner conflicts of love, whether familial or romantic? Which women are healed emotionally or spiritually by the lessons of love?

13. Why is Alma the Chosen One, the woman selected to heed the ancestral call? What does she conclude about herself, her quest, and her bloodline following her travels?

14. This novel, like the work of Charles Dickens, possesses a wealth of memorable characters in supporting roles, such as Nanny, Zubena, Cedella, Allie Mae, Trevor, Banana Man, and Chocolate Chip, among others. Select two from the supporting cast and discuss what these secondary characters contribute to the overall story.

15. Some critics say there is a tendency by some African-American writers to overly romanticize the African ancestral blood tie, glorifying a painful past. Has the author sufficiently stated her case for renewed respect and appreciation of Mother Africa through the experiences of her many characters?

16. What does the author mean when she writes: "’Victory or defeat resides not in the doer of the deed but in the song sung by the teller of the tale’"? (p. 399)

17. The author, Sandra Jackson-Opoku, says one of the major themes of the book centers around the idea of "the price of forgetting and the price of remembering." How do the lives of these characters demonstrate that both remembering and forgetting have a price?

18. The River Where Blood Is Born depicts many eras in American history. What techniques does the author use to make the novel historically and culturally correct?

19. Big Momma is able to connect with Alma in ways that her parents are unable to. How does she manage to do this? Is this a typical grandparent/grandchild relationship? If so, why are grandparents sometimes able to do what parents are not able to do?

Sandra Jackson-Opoku is an award-wining poet, journalist, and storyist who writes frequently on culture and travel in the African Diaspora. The River Where Blood Is Born, her first novel, won the Black Caucus of the American Library Association Award for Fiction; her work has also earned a National Endowment for the Arts Fiction Fellowship, Coordinating Council of Literary Magazines–General Electric Fiction Award for Younger Writers, and a Ragdale Foundation US-Africa Writers Fellowship, among other honors. The River Where Blood Is Born was conceived following her first trip to Africa in 1975 and written over the next twenty-one years. She is completing a second novel for adults as well as a children’s book. Sandra Jackson-Opoku has taught literature and creative writing at Chicago State University and the fiction department of Columbia College. She also works as a freelance journalist, a travel columnist, and a television script writer. She lives in Chicago with her two children, Kimathi and Adjoa.
Learn More About The River Where Blood Is Born
print

Too Much Too Soon

All the Days of Summer

The Unsuitable Secretary
Back to Top