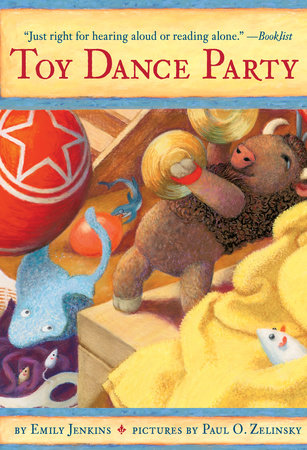 Toys coming alive? It is every child’s dream, but a reality for the Little Girl whose toys sing, dance, and play while no one is looking. Their antics around the house often get them into trouble, but they are quick to come to the rescue of their friends. They test their bravery, learn about forgiveness, and show unwavering love for the Little Girl. Follow along as these small toys create big adventures.

Emily Jenkins is the author of numerous highly acclaimed books for children. She lives in Brooklyn, New York.

Chapter 1
The Toys Are Left In
The Girl and her family have gone on a winter vacation, and left the toys at home. They feel lonely, unloved, and a little scared that the Girl has been away for so long. Maybe she is lost? It is up to Lumphy and StingRay to find her. They head out into the snow, and run into more trouble than they expected. They certainly are happy when the Girl comes home and brings them in from the cold. The warm radiator sure feels good.
For Discussion
When you go on vacation, what do you make sure to bring? What possession is the most important to you?
Class Activity
Memory–Play the game “I Am Going on Vacation.” Sit in a circle. One students starts by saying “I am going on vacation, and I am bringing . . .” The next student repeats this phrase and the item that the last student is bringing, and then adds their own item. This process continues with each student repeating the items that all of the previous students have said as well as adding their own. This is a great test of memory!

Chapter 2
In Which There Are Wonderful Costumes and Violence Occurs
StingRay goes to the movies! When she gets home, she is excited to share the movie with all of her friends. They play pretend, with costumes and props, but the other toys are not following StingRay’s rules. They say StingRay is being a “bossyboots.” An argument between Lumphy and StingRay leaves both of them in need of help, and they have to solve their problems together.
For Discussion
What are the five senses?
Class Activity
Sensory Perception–Ask students to select one of the following locations–amusement park, swimming pool, grocery store, zoo, or beach. Direct them through an exercise in which they close their eyes and imagine themselves in that location. What do they hear, feel, see, and smell? Have students record these observations on a piece of paper. Ask each student to read their writing aloud to the class, and see if the other students can guess the place they are describing!

Chapter 3
The Garbage-Eating Shark (Which Is Not the Same as the Possible Shark)
There is a new toy in town! But when a shark pops out of the box, the other toys run for cover in the basement. Frank, the washing machine, is so happy to have visitors, that he thinks it is time for a dance party. The toys dance and sing until they remember that they left the shark upstairs. She could have eaten everyone else by now! They run upstairs and attack the shark, not realizing that she is quite friendly and fun to have around. An apology makes the shark feel like part of the group.
For Discussion
Reread aloud the section about the dance party. (pp. 68—70) What adjectives would you use to describe the dance party? Try to think of colors, shapes, sounds, movements, and feelings.
Class Activity
Imagery–Ask students to draw what they think this dance party would look like. They should have the book next to them so that they can refer back to the descriptions in the story. Be sure they include all of the characters in their picture.

Chapter 4
Concerning That Plump Mouse Bonkers, the Vacuum Cleaner, and a Friendship Between Fish
It is cleaning day and the Little Girl is in charge of vacuuming her room. All of the toys know to stay out of the way, except Bonkers. He got sucked up into the vacuum! So, the toys embark on a rescue operation. They are unsuccessful in their efforts, until the shark, being an expert chewer, gnaws through the vacuum bag leaving a hole big enough for Bonkers. The shark saves the day, and makes StingRay realize that being friends might not be such a bad idea.
For Discussion
What is the dictionary used for? How can it be helpful? Review how to use a dictionary as well as what can be found in it–words in alphabetical order, multiple definitions, parts of speech, etc.
Class Activity
Vocabulary–Provide each student with a list of vocabulary words from this chapter: bustle, mildew, persist, finery, fiesta, immobile, thorough, pry, discernible, joggles, aperture, dispirited, jubilant, and glee. Ask them to use the dictionary to find the definitions of these words. They should record the definitions and then write sentences using each word. Allow them time to quiz each other on the meanings of these words and then create a crossword puzzle to test what they have learned.

Chapter 5
In Which There Is a Sleepover and Somebody Needs Repair
The dryer is in need of repair and Frank, the washing machine, is worried that his friend might be replaced by a stranger. Lumphy is worried too and during the toys’ sleepover, he asks everyone to wish on a star that the dryer will feel better. Lumphy knows just how to make himself dirty enough to visit Frank, and finds that the dryer is fixed. What a relief! All of toys celebrate together with a dance party.
For Discussion
Who do you love and care about?
Class Activity
Poetry–Have students write a song for someone that they care about. The song can be written to the tune of a common song such as “Happy Birthday to You” or “Old MacDonald Had a Farm.” Students should try to have lines that rhyme, as well as a chorus. When they are finished, ask them to sing their song to the class, as well as to the person it was written for!

Chapter 6
Let’s Do Our Nails
How observant is the Little Girl? Shark suggests that they test her by painting the Barbie box with nail polish. Plastic wonders if this is a naughty or nice thing to do, but joins in anyway. What fun the toys have painting the box! But when the Little Girl returns and sees the box and the mess the toys made, she takes the blame in front of her parents. Secretly, she knows that the toys were the ones who made her this wonderful present.
For Discussion
What does it mean to be observant? What kinds of things do you see around the classroom?
Class Activity
Observation–Ask the students to take a good look around the classroom. Have them draw the classroom as they see it. Then ask them to close their eyes. Change a few things around in the room–remove an object, move a piece of furniture, write something on the board. Then have the students open their eyes and draw the way the classroom looks now. Have them circle the items that have been changed to see how observant they are!

Final Projects
Personification
Explain the concept of personification–assigning human traits to an animal or object. Divide students into three groups. Assign each group to one of the main characters of the stories–StingRay, Lumphy, and Plastic. Ask students to create a character map that describes the physical features and personality traits of that character. They should be as specific as possible, citing examples from the story that support each trait. Then ask students to create their own personified toy. They should choose a type of toy and give it a name. Place this information on a blank character map. Have students fill in the new character map with their toy’s physical characteristics and personality traits. Be sure they draw a picture of what their toy looks like. To expand on this activity, have students write a story about the adventures of their toy!

Character Development
Throughout these books, we are able to follow the development of several characters, including the Little Girl. We watch the characters display numerous behaviors, some of which are very important in leading a positive and productive life. Others are negative traits that the characters learn to conquer and resolve. Some of the traits highlighted in these books are: facing fears, determination, greediness, giving, thoughtfulness, bravery, friendship, being judgmental, being helpful, caring, and forgiveness. Have students find examples of these in their books and discuss the situations as a class. Then pair students together and assign them to a trait. Ask them to think of a scenario that would demonstrate their trait. They can act it out in front of the class, and have their classmates determine which trait they are exhibiting.

Onomatopoeia
Toys Go Out and Toy Dance Party are filled with onomatopoeias! Discuss the definition of onomatopoeia–a word that imitates the sounds associated with an object or action. Brainstorm examples together such as zoom, zip, boom, etc. Then send your students on an onomatopoeia scavenger hunt. Each student should look through their book and find as many onomatopoeias as they can, recording them on piece of paper. Ask students to read the words they found aloud and award a prize to the one who found the most!

Research
Take your students on a journey through the animal kingdom. Collect nonfiction books from the library on stingrays, buffaloes, mice, sheep, and sharks. Pass them out to your students and give them some time to explore the information. Ask them to record three things that they learned about these animals. Now have your students choose their favorite animal. Ask them to use credible Web sites to gather information about that animal such as physical characteristics, habitat, diet, offspring, and protection against predators. They should print out pictures as well as informational passages. Students can compile this information on a display board to show off all they have learned.

These books are a collection of linked stories that entwine the lives of the Little Girl and her bedroom toys. Take your students on a journey to learn about friendship, facing fears, and how to be part of a group. Discussion questions lead to class activities that explore character traits, literary tools, and reading comprehension strategies. By allowing your students to share in the adventures, you will see them engage in these stories like true readers!


Learn More About Toy Dance Party
pdf
Back to Top