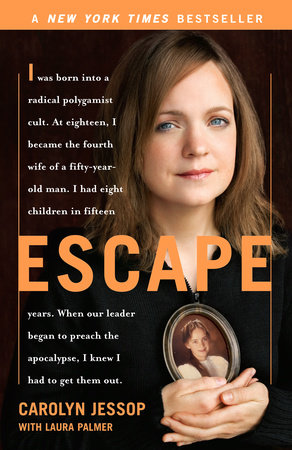 1. How is God used to justify FLDS beliefs about sex, marriage, and parenting? How do these beliefs affect the daily lives of FLDS members? How are women particularly affected by the risk of sexual shame?

2. What are the biggest differences in the way men and women are treated in the FLDS? How does this influence the relationships between spouses?

3. Discuss the dynamics among the wives described by Carolyn. How did their situations cause cruel behavior, often driven by scarce resources? What does it take to reduce humans to such destructive levels of competition?

4. Why do you think polygamy has continued to exist in the modern world? What did the media’s images of Yearning for Zion mothers indicate about why a woman would stay in a community that strips her of power?

5. How do Carolyn’s recollections of her childhood both sustain her and haunt her? What did her two mothers teach her about the role of women in the world?

6. How do the nusses at times act like typical teenagers? What alliances does Carolyn build with them? What does marriage do to the nusses’s sense of sisterhood?

7. Early on, Carolyn dreamed of becoming a doctor. In her Epilogue, she describes her former classmate, Lloyd Barlow, who now serves as a physician at Yearning for Zion, and she expresses concern that an in-house FLDS doctor might turn a blind eye to abuse. How would you explain the FLDS’s attitude toward healthcare? Ultimately, what forms of healing, emotional and physical, was Carolyn able to find?

8. How do FLDS children adapt to living in extremely large families? Do they typically accept their new brothers and sisters? How are favoritism and competition handled? How does this experience shape the way they view the world and their relationships with others?

9. How did you react when Carolyn described the ex-convict who began working at her husband’s motel? Why didn’t Merril care about her personal safety? How was Colorado City affected by the fact that the FLDS controlled local law enforcement?

10. Well into her marriage, at a later age than most FLDS women, Carolyn was allowed to receive the prophecy of her destiny. The reading predicted that she had special intellectual gifts that would be applied to unusual purposes. Why were such revelations of a woman’s destiny kept private? Do you believe she received any sort of true prophecy that day?

11. Carolyn describes how Warren Jeffs used 9/11 to claim that God was answering the prophet’s prayers for the wicked to be destroyed. What led so many people in the FLDS to follow Jeffs’s apocalyptic preaching at that point? What happened to those who were skeptical?

12. How was money managed in Carolyn’s family and within the FLDS? How did Carolyn learn to make do and become a good provider for her family? How was Warren Jeffs able to build his fortune?

13. Why do you suppose Carolyn’s daughter, Betty, returned to the FLDS? How would you have handled the prospect of having to testify against your own daughter?

14. Carolyn believes that the Yearning for Zion ranch prevailed in court in 2008 partially because of substantial financial resources. Do you predict that the FLDS will ever become extinct, or dismantled by a court order?

15. Education is tightly controlled by the FLDS, another tactic that limits the freedom of women. What led Carolyn to graduate from college, despite constant obstacles?

16. How did you react to the news footage when authorities raided the Yearning for Zion ranch in 2008? What did Carolyn’s Epilogue reveal that was not covered by the media? Did media attention help or hurt the FLDS?

17. Discuss the powerful scene in which Carolyn testifies before a Senate Judiciary committee, alongside mainstream Mormon Senator Harry Reid. How did that experience transform her?

18. Carolyn continues to celebrate everyday freedoms, such as a simple dinner and a movie with Brian. How has her story affected the way you appreciate your own life? What actions could you take to help victimized women and children in your community, or elsewhere in the world?

A Year by the Sea
Joan Anderson

With or Without You
Domenica Ruta

My Heart Will Cross This Ocean
Craig Wolff and Kadiatou Diallo

All That Is Bitter and Sweet
Maryanne Vollers and Ashley Judd

The Possibility of Everything
Hope Edelman

It Looked Different on the Model
Laurie Notaro

The Bond
Sampson Davis, George Jenkins and Rameck Hunt
Back to Top