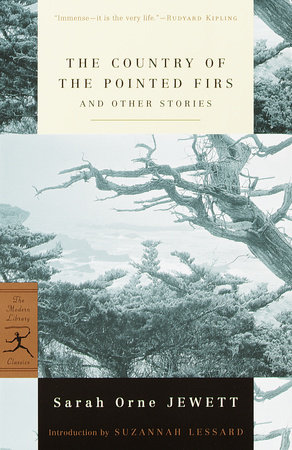 1. The Country of the Pointed Firs is not so much a novel as small episodes strung together. What do you think Jewett was trying to accomplish using this loose structure? What is she saying about New England country life?

2. Consider the narrator’s view of the "quaint" village people in the beginning of the novel compared to her view as she leaves Dunnet Landing. How and when did her worldly view change of the small village and villagers?

3. Some critics argue Jewett was simply romanticizing the idealization of the simple life. However, take into account Mrs. Todd’s herb gathering, Captain Littlepage’s "quirks," and the narrator’s friendship with the inhabitants of Dunnet Landing. Do you feel the core of this novel is romantic, or humanistic and even religious?

4. The work heavily relies on four symbolic contrasts-the funeral, the sea, the outer islands, and the song sparrows. How do these four symbols work and contrast with each other? Are they relaying the theme of the novel, and if so, what exactly is that theme?

5. Consider Captain Littlepage’s "spells," William’s inability to function in society, and Joanna’s self-exile to Shell-heap Island. Is Jewett commenting on what small town life can do to a person’s mind, or is she simply romanticizing life on the sea?

6. Consider the narrator’s reaction to Mrs. Todd’s tale of Joanna. Do you feel the narrator relates to Joanna, or is she just simply sympathetic to the shunted woman?

7. In Jewett’s time, alternative medicine was vehemently looked down upon while many women such as midwives were persecuted for their practices. Yet, Mrs. Todd works alongside the village doctor, and even prescribes pennyroyal (a known abortive). Is Jewett trying to give respectability to a dying practice, or is she satirizing a "country practice"?

8. The Country of the Pointed Firs is often branded as local-color literature. Do you feel Jewett was nostalgically writing about her beloved Maine, or was she trying to contrast New England with the rest of America and connect the "good old days" with the more fast-paced, industrial America growing around her?

9. In what ways does Jewett defy the prevailing nineteenth-century gender relations, namely the separation of women’s and men’s lives and women’s sphere in the home and public? In what ways does she embrace those views?

The Haves and Have Nots
Various

The Diamond as Big as the Ritz
F. Scott Fitzgerald

The Other House
Henry James

Bayou Folk and a Night in Acadie
Kate Chopin

Dubliners
James Joyce
Back to Top