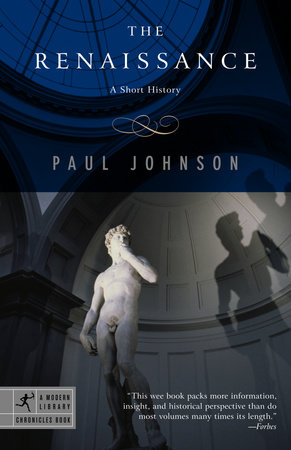 1. In what ways was the Renaissance a transition between the medieval and modern periods?

2. When was the term “Renaissance” first employed to describe this period in European history? How conscious were the people living during this period of the uniqueness of their own time? In what social, political, and cultural realms was this sense of historicity more and/or less prevalent?

3. How did the Renaissance differ from previous renaissances? How was it similar?

5. What is Renaissance humanism? To what extent was humanism a revolt against university learning at the time? Could it be argued that humanists merely provided the cloak of authenticity, a kind of set-dressing, for the rule of despots? Why or why not?

6. Of all the artists and writers mentioned in this book, who would you say embodies “the Renaissance man” to the fullest extent of the ideal? What great Americans have been described as “Renaissance men”? Could anyone from our own present-day culture be aptly called a “Renaissance man” (or woman)? Why or why not?

8. Could it be said that the modern-day culture of celebrity was born in the Renaissance? What role did this cult of the individual play in the artistic innovations of the period?

9. What are the relative limitations and benefits of studying a period by focusing on the arts and culture, rather than society and politics, or technology and economy? Why has Paul Johnson chosen this approach?

10. Which contributions of the Renaissance have been the most enduring?

Learn More About The Renaissance
print
Back to Top