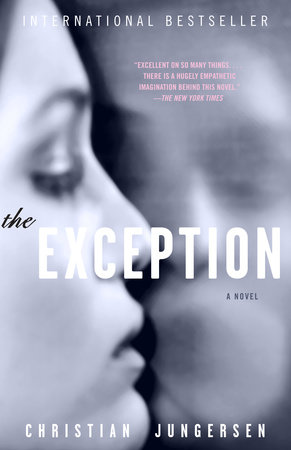 “Excellent on so many things. . . . There is a hugely empathetic imagination behind this novel.” —The New York Times

The introduction, questions, and suggestions for further reading that follow are designed to enliven your group’s discussion of Christian Jungersen’s The Exception.

An internationally bestselling thriller, The Exception dissects the nature of evil and the paranoia that drives ordinary people to commit unthinkable acts.

Four women work together for a small nonprofit in Copenhagen that disseminates information on genocide. When two of them receive death threats, they immediately believe that they are being stalked by Mirko Zigic, the Serbian torturer and war criminal they recently profiled in their articles. Yet as tensions mount among the women, their suspicions turn away from Zigic and toward each other. The threats increase, and soon the office becomes a battlefield in which each woman’s move is suspect.

1. The Exception is a novel about the workplace, and it is a thriller. Do you feel that murder and death threats help to illustrate its issues of ostracism, maliciousness, and self-delusion-or do you feel the thriller elements take away from those concerns?

2. The book’s structure is divided into parts which alternate between the perspectives of each of the four female protagonists. As we, in turn, follow Iben, Malene, Anne-Lise, and Camilla, we realize that their perceptions of what is going on are mutually exclusive. Do you agree that one and the same reality can give rise to such irreconcilable understandings?

3. After reading each of their points of view, how does your own perception of each woman change?

4. Iben and Malene write articles about the genocides of the twentieth century in which they examine the psychology of the perpetrators. How do their articles, which appear in the novel, further your understanding of the characters and their actions?

5. How does Anne-Lise’s work life affect her family life and vice versa? What might Anne-Lise have done to avoid her situation?

6. Do you think the conflicts would be different if the four main characters were men? What if their boss were female?

7. Do you see your work experiences, or those of people close to you, in a different light?

8. Why do you think Camilla is so passive? What are the deeper secrets that she is hiding? How is her marriage to Finn a struggle for survival?

9. Why does Iben hold a bleak view of mankind? Do you find that her philosophy has been undermined by the end of the novel? Do you agree, as Anne-Lise’s doctor says that “victimizing others is part of human nature” [p. 229]? What might make us think otherwise?

10. Are you one hundred percent sure who committed the murder?

11. The Exception portrays the psychological games the women play with each other and with themselves. In what ways are the psychological mechanisms they use to deny or justify their actions similar to the behavior of genocide perpetrators?

12. To whom or what does “the exception” of the title refer? At what point in the novel is that made apparent? How does that inform the events in the novel?

13. Do you believe that our understanding of how ordinary people can commit genocidal atrocities risks our ability to recognize and deter genocides from occurring and taking a hard-line on the punishment of war criminals? Or do you believe this understanding is imperative for future prevention of genocides?

The Eye of the Leopard
Henning Mankell

The Cradle in the Grave
Sophie Hannah

We Trade Our Night for Someone Else’s Day
Ivana Bodrozic

The Gates of Evangeline
Hester Young

Murder on the the Thirty-first Floor
Per Wahloo

Dancing with the Tiger
Lili Wright

Death of a Nightingale
Lene Kaaberbol and Agnete Friis

The Buddha’s Return
Gaito Gazdanov
Back to Top