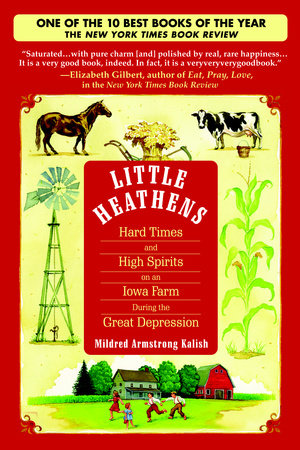 Transporting us to an era that was by turns rich with simple pleasures and rife with bitter hardships, Little Heathens captures the unique world of Midwestern farm families during the 1930s. Unfolding in a series of personal, detailed recollections in a voice that is as frank as your best friend’s and as nostalgic as your grandmother’s, Mildred Armstrong Kalish’s memoir brims with special reminiscences of a lost way of life. From the succulent joy of savoring home-grown crops to the fearsome winters that left ice formations inside her bedroom window, Mildred pays tribute to remarkable Americans who, without electricity, indoor plumbing, or modern medicine, found much to celebrate despite severe deprivations. Mildred supplies more than just a feast of hearty stories for your book group to enjoy; whip up a few of her delicious homespun recipes to complete this marvelous journey.

The questions and discussion topics that follow are intended to enhance your reading of Mildred Armstrong Kalish’s Little Heathens. We hope they will enrich your experience of this inspiring memoir.

1. Little Heathens recounts an adult woman’s memories of a childhood long past. What is the difference between a child’s perspective and an adult’s? How did Kalish’s understanding of the world change as she grew older? Are there some ways in which her approach to life is still the same now as when she was a child?

2. How did Kalish’s memoir enhance your understanding of the Great Depression? What differences existed between farmers and city dwellers who lived through it? What legacies of this time period exist in your family?

3. Which of Kalish’s relatives was most memorable to you? Was there an Aunt Belle in your childhood? Who plays that role for the next generation?

4. How would you characterize the dynamics within Kalish’s large family? How was peace kept? What accounted for the contrasts between her relatives who were indulgent and those who were frugal?

5. What comparisons can you make between men’s and women’s roles during this period in American history? What did Kalish’s mother teach her about what a woman could expect of life?

6. Discuss the economic realities that defined this era. What determined who would manage to get by and who, like the families she describes, would lose their farms altogether? What attitudes toward money was Kalish taught to develop?

7. Kalish describes the longevity of many of her ancestors, who relied on home remedies rather than emergency rooms for treatment. She also describes the presence of cream in most of her family’s meals, and the availability of glorious fresh-baked desserts that would be strictly forbidden on a contemporary weight-loss plan. What keys to health and wellness does her memoir provide?

8. What did it take to fit in within this Iowa community? Which children and adults were accepted, and which ones might be subject to pranks or gossip? How did Kalish’s experience at school compare to that of a student at one of the large public schools that now replace her classroom?

9. How did you react to the discussions of food preparation featured in the book–from regulating the stove temperature to slaughtering–and cleaning–the main course? What were the benefits and shortcomings of such a labor-intensive use of fresh ingredients, and of life without supermarkets? Did any aspects of Kalish’s Depression-era cuisine surprise you?

10. In the end, Kalish tells us how she was able to journey far from the farm and build a life in urban areas. What distinguishes those who remained on the farm from those who left it?

11. Had you realized that the rural electrification bill was not passed until Roosevelt’s presidency? How did it shape a community to live at the mercy of the seasons, without electricity or indoor plumbing? What was Kalish’s relationship with the natural world like?

12. Discuss the role of religion in this community. What did the hierarchy of religions described by Kalish indicate about the populations who lived in her area? What were the foundations of faith within her family?

13. Early on, Kalish tells us that her mother was a single parent, and that the story of her absent father was rarely mentioned. How did her family compensate for her absent parent? How did her mother’s experience of single motherhood compare to that of parents in similar situations today?

14. Could your family endure the way of life described in the book?

15. What is gained and lost in a world that favors technology over manual labor?

16. Discuss the title of Kalish’s memoir. Which of her extended family’s antics made you laugh the most? How have the standards for naughty “little heathens” changed since she was a child?

17. What stories would you include in your memoir? What aspects of history does your life capture?

Laughing Without an Accent
Firoozeh Dumas

The Piano Shop on the Left Bank
Thad Carhart

I Shall Not Be Moved
Maya Angelou

Half a Life
Darin Strauss

A Song Flung Up to Heaven
Maya Angelou
Back to Top