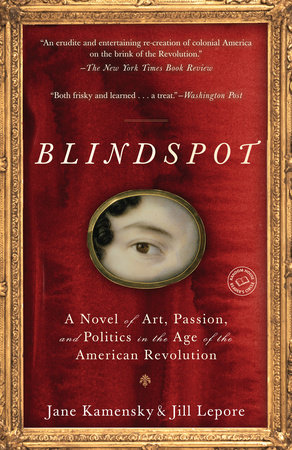 1.  Discuss the motifs of blindness and seeing in the novel. Why do you think Jane Kamensky and Jill Lepore chose Blindspot as the novel’s title? What types of blind spots do the characters in the novel experience?

3. Blindspot is meant to be read as if it were written in Boston in 1764. How do the authors signal the language, values, and feel of that place in time? What role do the excerpts from the Boston Gazette, many of them loosely adapted from the actual newspaper, play in setting the mood and advancing the story? Why do you think the authors chose to tell the story with both fictional elements and historical documents?

4. Not long after landing in Boston, Jameson points out an irony inherent in the colonists’ desire for freedom: “Ably do they see the shackles Parliament fastens about them, but to the fetters they clasp upon others, they are strangely blind” (p. 26). What do you think of his statement? How does the novel address issues of liberty and slavery?

5. Jameson often addresses his “dear Reader” directly. Who do Jameson and Fanny assume their respective readers to be? How do their assumptions about their audience affect the ways they tell their stories?

6. In her letters to her childhood friend Elizabeth, Fanny Easton bemoans the limits placed upon female education and ambition. What constraints shaped Fanny’s life as a woman, and does she successfully escape them by posing as Francis Weston? How different were the expectations governing American women’s lives in the eighteenth century from those in our own day? What can Jameson do that Fanny can’t?

7. Blindspot is rife with riddles, puns, and wordplay. Jameson’s speech is filled with bawdy puns, and Fanny enjoys entertaining him with riddles. In fact, the solution to the book’s mystery is found in the pages of a book of puzzles. Discuss the role of puzzles in the novel.

8. Although Jameson is technically Francis Weston’s superior, he often feels controlled by his apprentice: “Are you so blind you cannot see that you are master?” he implores Francis. Discuss the various master/slave relationships in the novel. How do they develop as the novel progresses? Did Kamensky and Lepore complicate your previous notions of this relationship?

9. Why do you think the authors chose to make the main characters of Blindspot artists? What kinds of connections do the authors draw between Jameson’s paintings and the patriot politics of the Friends of Liberty? Is Jameson’s art itself revolutionary?

10. Although the character of Ignatius Alexander—an erudite and refined African who has been educated as an experiment—may seem surprising, Kamensky and Lepore’s portrayal of him is actually very closely based in fact. Discuss his function in the novel. How well do Jamie and Fanny understand Sander’s world and his vision? Why do you think the authors chose to tell Sander’s story through Jamie’s and Fanny’s voices, and why does the doctor resist telling his own story?

11. Jameson seems just as attracted to Francis Weston as he is to Fanny Easton. What do the authors suggest about understandings of sexuality in eighteenth-century America? Do you think our society today is more or less tolerant than the one depicted in the novel?

12. Blindspot is a historical novel, but many of the issues it addresses still feel relevant today. What kinds of similarities did you notice between the political issues addressed in the novel and the ones you think about in your own life?

13. Did the novel support or upturn your previous sense of Revolutionary America? In which ways was it similar, and in which was it different? Did anything surprise you?

The Countess and the King
Susan Holloway Scott

In Need of a Good Wife
Kelly O’Connor McNees

Stones In the Road
E.B. Moore

The Various Flavors of Coffee
Anthony Capella
Back to Top