Who Will Write Our History? Reader’s Guide 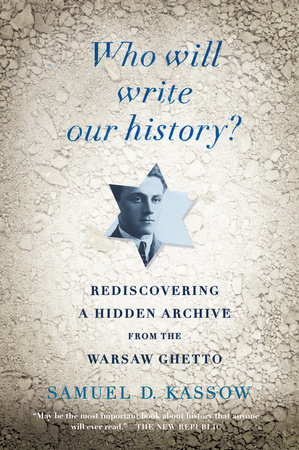 Who Will Write Our History? Reader’s Guide

print
Who Will Write Our History? Reader’s Guide

“This may be the most important book about history that anyone will ever read.”
—The New Republic

The introduction, questions, and suggestions for further reading that follow are designed to stimulate your group’s discussion of Who Will Write Our History? by Samuel D. Kassow. Combining a detailed historical narrative and a generous selection of writings that reflect a wide-range of political, religious, and moral viewpoints, it is a stirring, unprecedented portrait of Oyneg Shabes, its extraordinary accomplishments, and its lasting legacy.

In one of the most remarkable and audacious endeavors of World War II, a group of historians, writers, rabbis, social workers, and teachers in the Warsaw Ghetto dedicated themselves to creating a record of Jewish life under the Nazi occupation. Established by the historian Emanuel Ringelblum and calling themselves Oyneg Shabes (Joy of Sabbath), they wrote essays and memoirs, solicited diaries and letters from other Ghetto residents, and even collected the writings and drawings of schoolchildren. As Hitler’s plans to exterminate the Jews turned from frightening rumor to grim reality, horrific reports about mass killings and deportations were added to their archives. When the Nazis launched their fearsome final assault on the Ghetto in the fall of 1942 and early winter 1943, members of Oyneg Shabes packed the precious documents in tin cartons and milk cans and buried them at secret sites in the Ghetto. Uncovered in the rubble of the Ghetto in 1946 and 1950, the archives provide incomparable eyewitness accounts of courage, suffering, despair, and hope.

1. Discuss the various approaches, both Jewish and Gentile, to the “Jewish question” during the interwar period in Poland. What light do they shed on the strengths, as well as the contradictions, within the Jewish community? To what extent was the relationship between Jews and the Poles of other religious backgrounds shaped by religious and cultural differences? By political and economic factors?

2. How did Jewish-Polish relations in Warsaw change after the German invasion? Were these changes directly attributable to official Nazi policies? Did the pressures of war justify (or excuse) the Poles’s acquiescence to the creation of the Ghetto and their readiness to identify Jews to the Nazi authorities?

3. What insights do the Oyneg Shabes archives give into the lives of Jews in provincial towns (shtetlekh) both before and during the war? How did the interactions between Poles and Jews differ from those in cities and what accounts for these differences?

4. Why were Ringelblum and others able to establish a relatively independent authority within the Ghetto? What practical steps did they institute to maintain a “normal” community? In what ways did Jewish history, culture, and traditional values provide a foundation for a sense of shared responsibility and social solidarity?

5. Compare and contrast the Warsaw Judenrat and Oyneg Shabes. How did their personal political beliefs influence the leaders of each group? Did the Judenrat under Czerniakow’s administration misuse its powers? Could it have stopped the widespread corruption of the police or refused to participate in rounding up Jews to be sent to labor camps during the early years of the war? Are there examples of situations in which the Judenrat’s actions were more sensible and more effective than those organized and supported by Oyneg Shabes?

6. Survival in the Ghetto depended to a large extent on illegal activities, including the smuggling of food and other necessities. Were the rules or norms of the past entirely abandoned in the Ghetto? What explanations are provided by the members of the Oyneg Shabes for aiding these efforts and for other activities that appear to be unethical or even immoral?

7. Chapter 5, “A Band of Comrades” focuses on individual members of Oyneg Shabes. What characteristics do they share? What impact did their prewar occupations, economic class, and political leanings have on the contents of the archives? How did the conduct of the war and the actions of the Western allies and the Soviet Union affect their perceptions and opinions?

8. Discuss the division between secular and religious Jews. How did each group define Jewish identity? What do their different, often contentious, points of view reflect about positive and negative developments in Jewish society during the war? How did rabbis and other religious Jews reconcile the unspeakable with their faith?

9. “War and its massive assault on Jewish society led to a reversal of gender roles and a new emphasis on values that had traditionally been the purview of women” [p. 241]. In taking on unusual or untraditional responsibilities, what particular strengths did women exhibit? How did their roles evolve as the war progressed? Do you think that women who took German lovers acted in a morally reprehensible way?

10. What do the writings of children reveal about the psychological impact of war on the most vulnerable members of society [p. 259-268]? Beyond providing for basic needs (food and shelter) what other obligations do adults have to the next generation? In what ways did the adults in the Ghetto fulfill these responsibilities and in what ways did they fail?

11. Rachel Auerbach, one of the few survivors, addressed the question of Jewish resistance [pp. 202-3]. Does Who Will Write Our History? support her explanations and arguments? What examples are there of Jews “standing up to the Germans”? Discuss the reasons for Jewish “passivity” offered throughout the book, including the psychological effects of German schemes that pitted Jews against Poles and Jews against one another; the refusal (or inability) of Polish Jews to accept their countrymen’s willingness to support the Germans; and the abiding belief that the fate of the Jewish people lies in the hands of God. What further insights does Ringelblum’s own analysis provide [p. 350-351]?

12. “From the very beginning Ringelblum understood the need to encourage writing ‘from inside the event,’ writing that would not be skewed by the distorting lens of retrospective recollection and selective memory” [p. 13]. Are eyewitness accounts necessarily free from distortions? What personal convictions, pressures, and prejudices appear in the excerpts quoted in Who Will Write Our History?

13. What information or impressions did you have about the Holocaust before reading Who Will Write Our History? Discuss how such works as Anne Frank’s The Diary of a Young Girl, Schindler’s List, the writings of Primo Levi, Elie Wiesel, and other survivors, as well as history books and film or television documentaries, have shaped our understanding of the Holocaust. Did Who Will Write Our History? provide a new perspective on the millions who lost their lives during the war? On those who perpetrated or collaborated in the destruction of Jewish lives and culture?

14. What fears and hopes about the future of Jews not only in Europe but also throughout the Diaspora does the archive reflect and how fully were they realized? Did Who Will Write Our History? change your feelings about Zionism and the creation of Israel as a Jewish state?

15. Ringelblum “complained that Gentile historians had shown little interest in Jewish history and that assimilationist Jewish historians had distorted that history…. Meanwhile, he emphasized, community records and documents disappeared, folklore vanished, and national cohesion atrophied” [p. 9]. Can a similar criticism be applied to the treatment of other groups (for instance, African-Americans, religious minorities, and women) in most mainstream historical writings? What effect does this have on members of those groups?

16. From Pol Pot’s murderous reign in Cambodia to the recent mass killings in Bosnia, Rwanda, and Congo, the post-World War II world has witnessed a series of genocidal campaigns and “ethnic cleansings.” What parallels can be drawn between the Holocaust and these other horrific events? Are we any closer to resolving the factors, both collective and individual, that establish the groundwork (and justification) for genocide?

Samuel D. Kassow is the Charles Northam Professor of History at Trinity College. He is the author of Students, Professors, and the State in Tsarist Russia, 1884-1917 and editor (with Edith W. Clowes and James L. West) of Between Tsar and People. He has lectured on Russian and Jewish history in many countries, including Israel, Russia, and Poland.

Diane Ackerman, The Zookeeper’s Wife: A War Story; Lucy S. Dawidowicz, From That Place and Time; Anne Frank, The Diary of a Young Girl; Martin Gilbert, The Holocaust; Philip Gourevitch, We Wish to Inform You That Tomorrow We Will be Killed With Our Families: Stories from Rwanda; John Hersey, The Wall; Thomas Keneally, Schindler’s List; Primo Levi, If Not Now, When?; Daniel Mendelsohn, The Lost: A Search for Six of Six Million; Samantha Power, A Problem from Hell: America and the Age of Genocide; Elie Wiesel, Night.
Learn More About Who Will Write Our History?
print
Back to Top