The Book of Eleanor Reader’s Guide 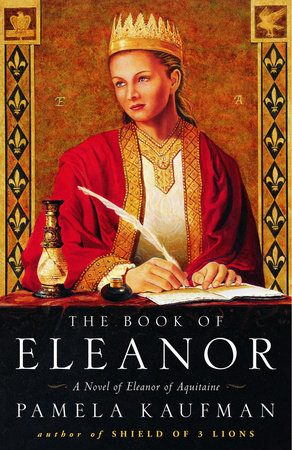 The Book of Eleanor Reader’s Guide

Eleanor of Aquitaine—dazzling Queen of France and England, shrewd politician, passionate lover—has been celebrated throughout history by her contemporaries, descendents, and biographers. You may remember Katharine Hepburn’s Oscar-winning portrayal of Eleanor in The Lion in Winter, or Alison Weir’s recent New York Times bestselling biography of Eleanor. In this mesmerizing new novel by bestselling author Pamela Kaufman, Eleanor’s story springs to life as never before, revealing the complex inner workings of one of the greatest women in history. Torn between her devotion to her chosen lover and her responsibility to her children and their political destinies; headstrong and proud, yet seized as a pawn by power-hungry men—Eleanor is a timeless and gripping heroine. Combining meticulous research with the seductive touch of a master storyteller, Pamela Kaufman speaks to us in Eleanor’s voice, drawing us deeply into the richly textured world of medieval royalty, and into the unforgettable life that has captured imaginations for centuries. This guide is designed to help direct your reading group’s discussion of Kaufman’s stunning The Book of Eleanor.

1. Throughout her life, Eleanor experiences a series of apparitions of her dead grandfather, William the IX, famed for his troubadour songs. She communicates with him right before she discovers Lady Rosamond hiding in Tintagel; again at the tomb of Henry I right before young William dies; and again in her prison tower when she is not sure she will live through the night. What do these apparitions signify? Why is her grandfather always naked and attempting to lure her away from life?

2. Abbot Suger blackmails Eleanor, ostensibly to ensure that Louis will have an heir to the throne. What are the terms of the blackmail? What does Suger really want? How does Eleanor turn the situation around and blackmail Suger? Why is Louis’s spiritual adviser, Thierry of Galeran, an enemy to them both?

3. How does Louis’s religious fanaticism—his “beatific affectation” as Eleanor calls it—impact the French and Aquitainian crusade to Antioch and Jerusalem? Why is his increasing madness to blame for the death of Eleanor’s uncle, Raymond? On what grounds does Eleanor finally achieve her annulment from Louis, and how does she play the religious system, particularly with Bernard of Clairvaux, to accomplish it?

4. Do you think there is a defining moment when Eleanor softens her feelings toward Henry? How does their spring spent together in Falaise affect her attitude toward him? Does he purposely lull her into a false sense of comfort, or do you think Eleanor creates this comfort for her children’s sake and for her own sanity?

5. Henry forfeits the region of Toulouse when Louis talks him into retreating along with his army. What does Louis offer him in exchange, and why? Why does Rancon see this event as the signal to begin an attack on Henry, and why does Eleanor refuse to seize the opportunity?

6. Why is it in Henry’s best interest to delay the appointment of an archbishop of Canterbury? What does he hope to achieve by appointing Thomas Becket, and how does his plan backfire? What does Becket achieve by keeping Young Henry as a hostage (in the guise of a student), but not crowning him?

7. One great schism in Eleanor’s heart is the divide between her loyalty to Aquitaine and her loyalty to her children. Where in the story do you see this conflict demonstrated? What are the results?

8. Do you see Eleanor as hungry for power? How much does her desire to be Queen of England influence what she’ll put up with from Henry? What subtle message does Eleanor glean from Henry’s mother, Empress Matilda?

9. Not long before Becket commits treason and incites an insurrection against Henry, he visits Eleanor to beg for her intercession with Henry. Why do you think Eleanor agrees to keep her meeting with him a secret?

10. Eleanor describes her Court of Love as a rebellion against Ovid, and his influence in developing a social structure that devalues men and women and their natural inclination toward egalitarian love, and warps them into “hunter and prey, always sensing that we have betrayed the central meaning of life.” Where in the book do you see Kaufman exploring the theme of hunter and prey—in the realms of marriage, religion, monarchy, politics, family, etc. When is Eleanor willing to play the hunter and prey game for personal gain, and when does she draw the line?

11. What is Princess Alais’ secret? Do you think she is an innocent victim of Henry’s brutality, or a willing lover and spy as Henry claims? What does Eleanor plan for Alais when she orders her locked in the White Tower?

12. Eleanor’s and Rancon’s seemingly doomed romance is underscored by the Tristan and Iseult legend they emulate. How does this legend frame and influence their long-suffering relationship?

13. Why does Eleanor purposely provoke Henry’s temper into a rage with the elaborate song and dance performance about a wife who seeks a suitable punishment for a wayward husband? Where else do we see Eleanor manipulating Henry’s moods for her own purposes? Is she successful in this particular plot?

14. What attitudes about love, power, and/or rebellion does Eleanor learn from her grandmother, Dangereuse? From her sister, Petronilla? From Empress Irene of Greece? From her handmaid, Amaria? Do you think the female relationships in the book are as significant as the male-female relationships? Why or why not?

From the Hardcover edition.
Learn More About The Book of Eleanor
print

The Prince of Poison
Pamela Kaufman