One For Sorrow Reader’s Guide 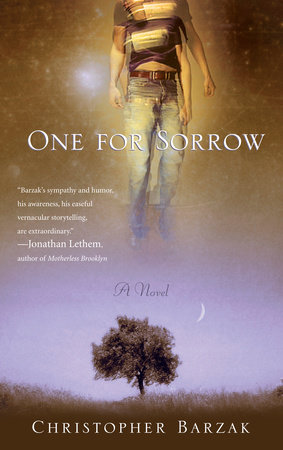 One For Sorrow Reader’s Guide

print
One For Sorrow Reader’s Guide

By turns chilling and poignant, One for Sorrow is the story of Adam McCormick, a teenage boy who is literally caught between two worlds. At fifteen, his life seems to be unraveling all around him. Confined to a wheelchair after a tragic car accident, Adam’s mother seems powerless to defend herself or her sons against their antagonistic father. At school, Adam thought he’d finally met a friend in Jamie Marks, but when Jamie is found dead in the woods, no place feels safe anymore. Then something remarkable happens: Jamie’s ghost appears, needing Adam desperately and opening his eyes to a new vision of loyalty and hope.

An author with astonishing storytelling powers, Christopher Barzak has created a gripping debut novel you’ll not soon forget. The questions and discussion topics that follow are intended to enhance your reading of One for Sorrow. We hope they will enrich your experience of this mesmerizing novel.

1. Discuss the novel’s four epigraphs. How do those perspectives on life and death reflect the events in One for Sorrow? Do these quotations match your perception of mortality?

2. Reread the rhyme that provides the novel’s title (Adam recalls his grandmother delivering these lines in “The Facts of Death”). What aspects of fate are present in the other lines, originally referring to crows circling broken stalks of corn? What allowed Adam and his grandmother to see images that were invisible to others?

3. What caused Adam’s family to break down? Is his father the only source of their suffering? What accounts for the tremendous differences between Adam and his brother, Andy?

4. Does Gracie give Adam an initiation into love that will serve him well later in life? Do he and Gracie harm or heal each other?

5. How does Gracie’s family life compare to Adam’s? Did she and Adam share the same reasons for wanting to leave? Why did he manage to escape again, while she was not able to do so?

6. Does Adam’s mother’s accident mirror other debilitating events in the novel? To what extent do Adam and Jamie also experience a version of paralysis? Is his mother the only one who develops an unhealthy relationship with her caregiver?

7. How would you characterize the vision of death and afterlife presented in Jamie’s story? Do you believe in a spirit world? If so, what do you think causes a soul to be restless? How do the novel’s characters, living or dead, find peace?

8. Adam alludes to reading a novel like Catcher in the Rye, expressing disdain for a well-heeled runaway teen like Holden Caulfield. What might Holden think of Adam? What distinguishes Adam’s narrative voice from that of other fictional teenage characters who have told a tale of painful alienation?

9. In “The Facts of Death,” Adam prepares the first draft of his Things I Know about the Dead and Other Observations. What would your own list of facts of death look like?

10. What are the major differences between Jamie’s and Frances’s relationship with death? In the end, did it prove to be liberating when Adam burned down the Wilkinson house? What were his motivations for doing that?

11. Was Adam’s grandmother right about the “finger of God”? How does Adam’s concept of God and religion change after his intense education from Jamie?

12. What is Tia’s role in guiding Adam back to his family? What does her father’s decrepit church come to mean to Adam? What turning points spurred him to return to his family after such a long absence?

13. How had you perceived Lucy in the beginning of the novel? Did you agree with those who didn’t trust her?

14. The novel opens with words Adam would hear at the starting line: “On your marks … get set … go!” His aunt was especially supportive of his role on the track team. In what ways is running an appropriate metaphor for his life?

15. How is life defined in One for Sorrow? Who among the living and the dead provide Adam with the will to live? What does it take for Adam to discover what it means to truly be alive?

Learn More About One For Sorrow
print

The Mystic Arts of Erasing All Signs of Death

Women on the Case

Life Penalty
Back to Top