When We Were Romans Reader’s Guide 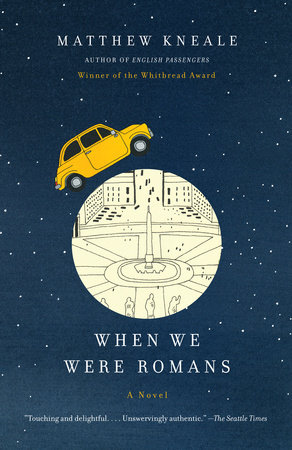 When We Were Romans Reader’s Guide

print
When We Were Romans Reader’s Guide

The introduction, questions, and suggestions for further reading that follow are intended to enhance your reading of Matthew Kneale’s When We Were Romans. We hope they will enrich your experience of this deeply moving novel.

Unfolding through the eyes of a perceptive little boy, When We Were Romans showcases the captivating storytelling power of award-winning novelist Matthew Kneale. Narrating a trip you will not soon forget, nine-year-old Lawrence describes the day his mother whisked him from their home in Britain. Along with his sister, Jemima, and his beloved pet, Hermann, Lawrence is soon in Rome, where his mother had lived happily as a young woman. She tells her children that their father is a dangerous stalker, and the only way to protect themselves is to embark on a life in hiding. Fascinated by the ancient lore of his new city, Lawrence weaves the history of emperors and popes with scenes of his slowly unraveling family. Soon, this boy’s adventure becomes a poignant path of discovery about his parents, and a quest to understand his place in their hearts.

1. How does Lawrence see the difference between men’s roles and women’s roles? How does he cope with feeling like the man of the family (with tremendous responsibility) as well as his mother’s very young son (with little control over his circumstances)?

2. How did your perception of Hannah change throughout the novel? Did you trust her husband?

3. Is the relationship between Lawrence and Jemima typical? Did it remind you of the way you and your siblings dealt with each other?

4. What do Cloudio, Beppo, the Vanhootens, and others in Italy seem to think of Hannah? What was Lawrence able to see that the adults could not?

5. What was the effect of Lawrence’s reports on astronomy? How does he feel about the pending cataclysms of the universe?

6. What did Lawrence teach you about the Roman Empire? In what ways is his recounting of history refreshing? Were you as knowledgeable about science and history when you were his age?

7. How does Lawrence understand the lunacy of Nero, Caligula, and others? Does he recognize their narcissism and their sadism?

8. Do Jemima and Lawrence think of their trip as dangerous or amusing? Do they accept their mother’s depiction of the trip as a grand adventure?

9. What does Hermann mean to Lawrence? Did you have a similar attachment to a pet when you were young? What do Lawrence’s depictions of the other characters as animals indicate about his imaginative powers?

10. Compare Lawrence’s voice to that of another child-narrated novel you admire. What makes his voice unique? What powerful qualities does a child’s voice possess?

11. Discuss the scene of Hannah’s return to Scotland. What do Lawrence’s actions indicate about how loyal and impressionable children can be?

12. What did Rome represent to Hannah? How did the novel’s varying settings create meaningful backdrops for the episodes in Lawrence’s life?

13. What hallmarks of Matthew Kneale’s storytelling style appear in When We Were Romans? In what ways does this novel expand on themes in his previous works?

Matthew Kneale is the author of the novel When We Were Romans, the short story collection Small Crimes in an Age of Abundance and the novel English Passengers, which won the Whitbread Book of the Year Award and was short-listed for the Booker Prize. He is a keen traveler who has lived in Japan, Canada, and Italy, and has journeyed extensively across the globe, visiting seven continents and walking in mountains from New Guinea to Ethiopia, Patagonia to Pakistan. Kneale lives in Rome, Italy, with his wife and two children.

The Tongue’s Blood Does Not Run Dry
Assia Djebar

They Burn the Thistles
Yashar Kemal

The Story of the Stone, Volume II
Cao Xueqin

The Serpent of Stars
Jean Giono

The Making of Henry
Howard Jacobson

Buzz Aldrin, What Happened to You in All the Confusion?
Johan Harstad

As for Me and My House
Sinclair Ross

The Root and the Flower
L.H. Myers

Me, You
Erri De Luca

Round the Bend
Nevil Shute

Growth of the Soil
Knut Hamsun

The Secrets of Noh Masks
Michishige Udaka
Back to Top