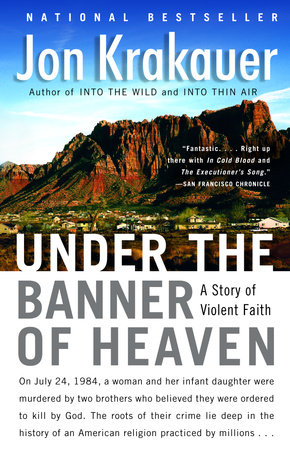 print
Under the Banner of Heaven Reader’s Guide

“Fantastic. . . . Right up there with In Cold Blood and The Executioner’s Song.” —San Francisco Chronicle

The introduction, discussion questions, suggestions for further reading, and author biography that follow are designed to enhance your group’s discussion of Jon Krakauer’s deeply unsettling new book, Under the Banner of Heaven.

In his bestselling books Into Thin Air and Into the Wild, Jon Krakauer explored the extreme ambitions of men who tested themselves against Mount Everest and the Alaskan wilderness. In Under the Banner of Heaven, he turns to a different kind of extremism: religious fanaticism and the violence it spawns.

In the prologue to Under the Banner of Heaven, Krakauer asks of the brutal murders committed by Ron and Dan Lafferty: “How could an apparently sane, avowedly pious man kill a blameless woman and her baby so viciously, without the barest flicker of emotion? Whence did he derive the moral justification? What filled him with such certitude? Any attempt to answer such questions must plumb those sectors of the heart and head that prompt most of us to believe in God—and compel an impassioned few, predictably, to carry that irrational belief to its logical end” [p. XXI]. It is these questions about the specifics of Dan and Ron Lafferty’s motives and beliefs and the larger phenomena of religious faith such as God’s will and fundamentalist violence that make Under the Banner of Heaven so illuminating and so disturbing.

Krakauer draws a clear distinction between law-abiding mainstream Mormons and fanatical Mormon fundamentalists. However, as he alternates between the history of Mormonism in the nineteenth century and contemporary cases such as the Lafferty murders and the kidnapping of Elizabeth Smart, Krakauer reveals a religion steeped in violence almost since its inception. Murderous clashes between Mormons and gentiles in Missouri and Illinois nearly led to civil war in the 1840s. After Joseph Smith was killed, the Mormons were forced to settle in the Utah Territory. At that time, Brigham Young petitioned Washington to establish a Mormon nation so that he could unite the church’s spiritual and political ambitions and preserve the outlawed practice of polygamy. Federal troops dissuaded Young, but the conflict at the heart of the turmoil remained: the Mormon belief in the supremacy of God’s law over the secular laws imposed by a “corrupt” government. This faith in the divine revelation of the will of God, which put Joseph Smith and the early Mormon church at odds with earthly authorities, would later inspire fundamentalists like Dan and Ron Lafferty to commit what they felt to be justified murders.

Indeed, the willingness to break secular laws in order to fulfill God’s will is the central problem Under the Banner of Heaven explores with such insight and thoroughness. And it is this belief that allows us to relate Mormon fundamentalists to their Islamic counterparts around the world: the fundamentalist’s passionate, irrational, and unalterable belief in the righteousness of his cause, even when that cause demands the most horrific violence.

1. In his prologue, Jon Krakauer writes that the aim of his book is to “cast some light on Lafferty and his ilk,” which he concedes is a daunting but useful task for what it may tell us “about the roots of brutality, perhaps, but even more for what might be learned about the nature of faith” [p. XXIII]. What does the book reveal about fanatics such as Ron and Dan Lafferty? What does it reveal about brutality and faith and the connections between them?

2. Why does Krakauer move back and forth between Mormon history and contemporary events? What are the connections between the beliefs and practices of Joseph Smith and his followers in the nineteenth century and the behavior of people like Dan and Ron Lafferty, Brian David Mitchell, and others in the twentieth?

3. Prosecutor David Leavitt argued that “People in the state of Utah simply do not understand, and have not understood for fifty years, the devastating effect that the practice of polygamy has on young girls in our society” [p. 24]. How does polygamy affect young girls? Is it, as Leavitt claims, pedophilia plain and simple?

4. Joseph Smith claimed that the doctrine of polygamy was divinely inspired. What earthly reasons might also explain Smith’s attraction to having plural wives?

5. When Krakauer asks Dan Lafferty if he has considered the parallels between himself and Osama bin Laden, Dan asserts that bin Laden is a “child of the Devil” and that the hijackers were “following a false prophet,” whereas he is following a true prophet [p. 321]. No doubt, bin Laden would say much the same of Lafferty. How are Dan Lafferty and Osama bin Laden alike? In what ways are all religious fundamentalists alike?

7. Krakauer begins part III with a quote from Bertrand Russell, who asserts that “every single bit of progress
in humane feeling, every improvement in the criminal law, every step toward the diminution of war, every step toward better treatment of the colored races, or every mitigation of slavery, every moral progress that there has been in the world, has been consistently opposed by the organized churches of the world” [p. 191]. Is this a fair and accurate statement? What historical examples support it? What improvements in humane feeling and social justice has the Mormon church opposed?

8. How are mainstream and fundamentalist Mormons likely to react to Krakauer’s book?

9. Much of Under the Banner of Heaven explores the tensions between freedom of religion and governmental authority. How should these tensions be resolved? How can the state allow religious freedom to those who place obedience to God’s will above obedience to secular laws?

10. Joseph Smith called himself “a second Mohammed,” and Krakauer quotes George Arbaugh who suggests that Mormonism’s “aggressive theocratic claims, political aspirations, and use of force, make it akin to Islam” [p. 102]. What other similarities exist between the Mormon and Islamic faiths?

11. How should Joseph Smith be understood: as a delusional narcissist, a con man, or “an authentic religious genius” [p. 55], as Harold Bloom claims?

12. Krakauer suggests that much of John Wesley Powell’s book, The Exploration of the Colorado River and Its Canyons, particularly his account of his dealings with the Shivwit Indians, should be regarded with a “healthy dose of skepticism,” and that it embellishes and omits important facts [p. 245]. Is Krakauer himself a trustworthy guide to the events he describes in Under the Banner of Heaven? Are his writing and his judgments fair and reasonable? What makes them so?

13. What patterns emerge from looking at Mormon history? What do events like the Mountain Meadow massacre and the violence between Mormons and gentiles in Missouri and Illinois suggest about the nature of Mormonism? Have Mormons been more often the perpetrators or the victims of violence?

14. At the very end of the book, former Mormon fundamentalist DeLoy Bateman says that while the Mormon fundamentalists who live within Colorado City may be happier than those who live outside it, he believes that “some things in life are more important than being happy. Like being free to think for yourself” [p. 334]. Why does Krakauer end the book this way? In what ways are Mormons not free to think for themselves? Is such freedom more important than happiness?

Jon Krakauer is the author of Eiger Dreams, Into the Wild, and Into Thin Air and is editor of the Modern Library Exploration series.

Will Bagley, Blood of the Prophets: Brigham Young and the Massacre at Mountain Meadows; Fawn Brodie, No Man Knows My History: The Life of Joseph Smith; Sally Denton, American Massacre: The Tragedy at Mountain Meadows, September, 1857; Judith Freeman, Red Water; Philip Jenkins, Mystics and Messiahs: Cults and New Religions in American History; John D. Lee, Mormonism Unveiled: Or Life and Confession of John D. Lee and Brigham Young; Bernard Lewis, What Went Wrong?: The Clash Between Islam and Modernity in the Middle East; Dorothy Allred Solomon, Predators, Prey, and Other Kinfolk: Growing Up in Polygamy.
Learn More About Under the Banner of Heaven
print

The Other Wes Moore
Wes Moore

At the Dark End of the Street
Danielle L. McGuire

The Audacity of Hope
Barack Obama

The Run of His Life
Jeffrey Toobin
Back to Top