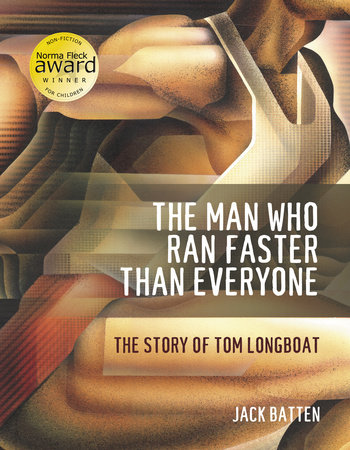 print
The Man Who Ran Faster Than Everyone Teacher’s Guide

Hamilton, Ontario; October 1906. An unknown youth stood at the starting line of the Around the Bay Race, a grueling run of over 19 miles. Unlike the other 25 competitors, some of them top runners, the newcomer did not wear a fashionable racing outfit. His plain bathing suit and jersey, and cheap canvas shoes revealed his humble background. The young man’s running style impressed no one. But the unknown runner swept past the competition and crossed the finish line well ahead of his nearest challenger. The sporting world was astounded.

Tom Longboat burst from total obscurity into the wildly popular sport of long distance running and quickly rose to international fame. He set new records, won the prestigious Boston Marathon in 1907, and ran for Canada in one of the most controversial events of the 1908 Olympics. In his time, he was as famous as Wayne Gretzky would be in a later era.

But his triumphs did not bring Tom the financial security and social standing today’s successful athletes enjoy. Tom was a Native Canadian, an Onondoga who had grown up in poverty on a reserve. In the white society that cheered his victories, Tom faced age-old prejudices. His acclaim was undermined by stereotyping and by an often-biased press. Men he trusted as friends profited from his accomplishments and then betrayed that trust. When his athletic career was over, and after he had served his country in war, the man who was faster than everyone was forgotten.

Canadian author Jack Batten has long been acquainted with the world of sports. In his youth he was taught to box by the former Canadian flyweight champion Alex Burlie. Mr. Batten’s biography on Tom Longboat, The Man Who Ran Faster Than Everyone, won the Norma Fleck Award for nonfiction in children’s literature. He has written 30 books on such diverse subjects as sports, law, biography, and crime fiction. Among his other titles are Blood Count: A Crang Mystery, Hockey Dynasties: Blue Lines and Bloodlines, and A Brilliant and Appalling Life: The Story of Criminal Lawyer Ross Mackay. Jack Batten is also a radio personality and a columnist for the Toronto Star. He lives in Toronto.

Physical Education
In his Victoria Day race in Caledonia, Tom came in second. What important lesson did he learn from that competition? What caused Tom to lose the Police Games race in Toronto?

History
What historic event brought the Iroquois people to what is now Ontario? What was the advantage of the Grand River Reserve to the British? What were the consequences for the Iroquois?

Sociology
What was the Canadian government’s purpose in sending Native children to schools like the Mohawk Institute? In what ways were these schools oppressive?

Ethics
The two men who had the greatest influence on Tom’s career and legacy were Tom Flanagan and Lou Marsh. Discuss some of the things these men did (or were alleged to have done) that would be considered unethical.

Math
People who bet on sporting events want to know the “odds; ” that is, how great or small the possibility is that a given competitor will win. In the Around the Bay race in Hamilton, Tom Longboat was a newcomer. Most people did not think he could win, so the odds against him were high. Therefore, when he won, small wagers that had been placed on him paid high returns. Once people knew how fast Tom was, the odds in his favor were high. A gambler who bet on him stood to win only a fraction of the wager if Tom won the race. If the odds in favor of Tom winning a race were ten to one, and a gambler placed a $10 bet on him, how much money — besides the original wager — would the gambler receive if Tom won the race?

1. Personal courage is a a recurring theme in Tom Longboat’s story. Ask students to discuss how Tom displayed courage (a) in his race in Buffalo with George Bonhag and (b) in the Canadian army during World War I.

2. As a Native Canadian, Tom Longboat faced well-
entrenched racial attitudes. Ask the class to discuss how these attitudes were revealed (a) in the press and (b) in the treatment he received after his career as a runner had ended.

3. The expression “cultural clash” does not necessarily mean racism, although racism can certainly be involved. Have the class discuss how Tom and his trainers experienced a cultural clash. What aspect of the trainers’ viewpoint might be said to have not been racist? How did the Native perception of running differ from that of the whites?

4. Early in his career, Tom ran as an amateur. Have the class discuss the differences between amateur and professional. What did Tom have to do to maintain his amateur status in Canada? Why was he banned from running as an amateur in the United States? What was one major consequence of the American ban?

5. Today performance-enhancing drugs are strictly prohibited in amateur and professional sports. Have the class discuss the reasons for this. How might a performance-
enhancing drug have contributed to Tom’s disastrous
Olympics experience? Why would it have been difficult for officials at that time to detect drug use among athletes?

6. Tom Flanagan was an opportunist who never missed a chance to exploit his relationship with Tom Longboat. Have the class discuss how Flanagan did this (a) in the race with Barney O’Rourke’s horse and buggy, (b) at Tom and Lauretta’s wedding, and (c) in Tom’s race with Alf Shrubb at Madison Square Garden.

1. Long distance running was a much more popular spectator sport a century ago than it is today. Ask students why people of that time would become excited about a long foot race. Tell them to think about the pace of daily life back then, and what was available for entertainment and diversion.

2. Today’s athletes earn considerable incomes endorsing products. Ask students what products they think Tom Longboat might endorse if he were a celebrity athlete today. Have them give reasons for their choices of products.

4. Ask students to imagine that they are going to a stadium in a Canadian city in 1910 to watch Tom Longboat compete. What sort of clothes would they wear? How would they get there? What would they take with them?

5. Ask students to write down three questions they would ask Tom Longboat if they were reporters interviewing him after he had won a race. Tell them to keep in mind things they know about him from Jack Batten’s biography.

6. Other Canadians have made names for themselves as runners. Ask students to research and write a brief report on one of the following: Percy Williams, Terry Fox, Steve Fonyo, Donovan Bailey.

FASTEST MARATHON EVER
RUN WON BY LONGBOAT
RECORD CLIPPED BY INDIAN YOUTH
Caffrey’s Time Improved by About Five Minutes
Fowler, Himself a Mark-Shaver, Half-Mile Behind at Finish

Thomas Longboat, a full-blooded Indian from Hamilton, Ont., won the famous B.A.A. Marathon race of 25 miles from Ashland to Boston yesterday in 2h 24m 24s, beating the record for the course 2h 29m 23 3-5s, which was made by J.J. Caffrey, also of Hamilton, in 1901, when the latter won the race for the second time.

The thousands of persons who lined the streets from Ashland to the B.A.A. were well repaid for the hours of waiting in the rain and chilly winter weather, for they saw in Tom Longboat the most marvelous runner who has ever sped over our roads. With a smile for everyone, he raced along and at the finish he looked anything but like a youth who had covered more miles in a couple of hours than the average man walks in a week. Gaining speed with each stride, encouraged by the wild shouts of the multitude, the bronze-colored youth with jet black hair and eyes, long, lithe body and spindle legs, swept toward the goal.

Amid the wildest din heard in years, Longboat shot across the line, breaking the tape as the timers stopped their watches, simultaneously with the clicking of a dozen cameras, winner of the greatest of all modern Marathon runs. Arms were stretched out to grasp the winner, but he needed no assistance.

Waving aside those who would hold him, he looked around and acknowledged the greetings he received on every side. Many pressed forward to grasp his hand, and but for the fact that the police had strong ropes there to keep all except the officials in check, he would have been hugged and sqeezed mightily. Then he strode into the club, strong and sturdily.

Learn More About The Man Who Ran Faster Than Everyone
print

Little Monsters: The Creatures that Live on Us and in Us
Albert Marrin

Exploring Space: From Galileo to the Mars Rover and Beyond
Martin Jenkins

The Phoenix and the Carpet
E. Nesbit

By the Grace of Todd
Louise Galveston

The Winter of the Robots
Kurtis Scaletta

Beyond the Lemonade Stand
Bill Rancic

Out of Line
Tina Grimberg

The Outlaws of Sherwood Street: Giving to the Poor
Peter Abrahams

A Nose for Adventure
Richard Scrimger
Back to Top