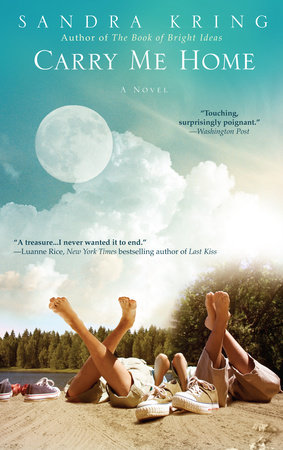 As World War II descends on the close-knit families of Willowridge, Wisconsin, the town’s wisest resident proves to be a simpleminded teenage boy nicknamed Earwig. Though a childhood illness left his mind diminished in some ways, he has a gift for candidly sorting fact from gossip and offering unbridled advice. When his beloved brother, Jimmy, is sent to the Pacific and becomes a prisoner of war, Earwig keeps his family hopeful while he struggles to understand the nature of suffering itself. And in the aftermath of war, it is Earwig who brings Jimmy back from a state of trauma and anguish, giving voice to the truths that remain unspeakable to the rest of Willowridge.

By turns tender and wry, Carry Me Home captures a mesmerizing snapshot of love–between brothers, parents, young couples, and lifelong friends–through the eyes of a frank, inspiring narrator. The questions and discussion topics that follow are intended to enhance your reading of Sandra Kring’s Carry Me Home. We hope they will enrich your experience of this heartwarming novel.

Praise for Carry Me Home:

“In a voice both childlike and wise, simpleminded Earwig Gunderman will capture your heart and challenge your conscience. . . . A plainspoken, nostalgic account . . . of a brother’s love, and the healing powers of family and community in the aftermath of tragedy.”–Tawni O’Dell, bestselling author of Back Roads and Coal Run

“A portrait of the greatest generation in the making. Sandra Kring writes with such passion and immediacy, spinning us back in time, making us feel the characters’ hope, desire, laughter, sorrow, and redemption. I read this novel straight through and never wanted it to end.”–Luanne Rice, bestselling author of Dance with Me

1. What are your initial impressions of Earwig? What does the opening scene reveal about his community?

2. Mrs. Gunderman often says, “We always pay for our mistakes.” What does she perceive her mistakes to be, and what price does she believe she has paid for them? Do any of the novel’s characters pay for tragedies that are simply due to circumstance, in which no one is to blame?

3. Earwig’s community divides women into two distinct moral categories, perplexed by the euphemism about not buying a cow when the milk can be obtained for free. How do these codes translate for Earwig? What moral categories does he establish for himself? Is gender a factor in them?

4. How was Earwig affected by his discovery of the family secret? How does his newfound knowledge affect the narrative overall?

5. What enables Mrs. Pritchard–and those who are like her in our contemporary lives–to feel so confident about her opinions? Did benevolence motivate her to share And They Shall Walk with Eddie?

6. Discuss the presence of Lucky in Earwig’s life. What is the significance of his being surreptitiously named after Charles Lindbergh, whom Mr. Gunderman despises? How does the presence of a pet, especially one that is difficult to train, transform Earwig?

7. What do the novel’s characters teach Earwig about being a man? Does he get conflicting advice from his mother and father, Jimmy and his friends, and the women in town?

8. Is Wisconsin a significant aspect of the novel’s setting, or does the fictional Willowridge capture the experience of most small towns in America during the 1940s?

9. Discuss the circumstances of Jimmy’s enlistment, and his involvement in the horrific Bataan POW camp. What does his narrative convey about the individual nature of every person serving in the armed forces? How are fate and choice balanced in Jimmy’s story?

10. How would you characterize Earwig’s voice? How do his irreverence and haphazard grammar make for engaging storytelling? What determines whether those features make a narrator attractive? Why aren’t the other characters able to achieve his level of clarity?

11. Compare the time period depicted in the novel to the present day. Earwig witnessed a tremendous economic shift, one that caused his father to take a job in another town while everyone tracked their ration allotments. Earwig also witnessed a period when unprecedented numbers of women temporarily entered the workforce. Did his generation possess more gratitude and resilience? Or are current generations just as strong and enlightened?

12. Jimmy comes home at a time when the treatment of posttraumatic stress disorder was essentially unknown territory and the horrors of war were not to be discussed, much less publicized. What techniques do the novel’s characters use to heal Jimmy and Floyd? How does Earwig ultimately carry his brother home? What members of your family or community could “carry you home” from a similar emotional state?

13. While others looked to the mailman for information about loved ones, Earwig relied on the sign of the blue star to tell him whether Jimmy was alive. What beacons do you look to for reassurance?

14. What aspects of history did you learn about in Carry Me Home? What details of life during World War II were new to you?

15. Though Floyd feels tremendous guilt about surviving his internment, the birth of his baby girl appears to set him free in many ways. Just as Earwig’s parents passed many legacies and wise words on to him, what legacy will Floyd impart to his child?

16. Seeking a more independent life, Earwig declines his brother’s offer to live with him and Eva Leigh. In a last glimpse of the brothers, on the eve of these new chapters in their lives, we see them returning to their beloved millpond. In what ways have they changed since the initial scene at the millpond? What remains permanent for them?

What Happened to My Sister
Elizabeth Flock

When the World Was Young
Elizabeth Gaffney

How High the Moon
Sandra Kring

All of Us and Everything
Bridget Asher