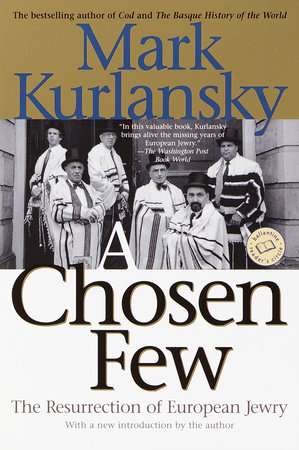 1. The book both opens and closes with Passover. What is the
significance of this holiday to this story?

3. Was it reasonable for Jews to return after the war to the countries
where they had been betrayed?

4. After the fall of Communism, very few Jews were left in Eastern
Europe who had any experience with the practice of the religion.
What does it mean to rebuild a Jewish community with
secular Jews?

5. Explain the difference in motivation between those Jews who
returned to East Germany and those who returned to West
Germany after the war.

6. Should the Zionists who returned to postwar Europe have
gone to Israel instead?

7. Would it have been easier to rebuild a religious community or
an assimilated community in postwar Europe?

8. Has European Jewry since 1945 undergone a resurrection, as implied
in the subtitle of this book, or is it something less than that?

9. What impact has the state of Israel had on European Jews?

10. What does it mean for American Jews that these communities
in Europe still exist?

11. Throughout European history, France was always thought of
as a haven for Jews, until the twentieth century. As the country
with the largest Jewish population in Europe, will it be a
haven or a dangerous place for Jews going forward into the
twenty-first century?

12. Why is the survival of European Jewry so crucial to the Jewish
people throughout the rest of the world?

13. In countries with some of the worst records of treatment of
Jews, it has become fashionable to embrace everything Jewish.
Is this philo-Semitism another form of anti-Semitism, and is it
dangerous?

14. Three million Polish Jews were killed in the Holocaust, and
most of those who returned were subsequently driven out. In
the current political climate of Poland, is there a future for
Jews, and are there enough to build a real community?

15. Why do survivors in Holland appear to be in more pain than
in most other countries? Is it because Holland never came to
terms with its war history? Is it that as a society, Holland is
more open to discussing psychological problems than other
countries in Europe?

16. What has the impact of terrorism been on Jewish communities
in Europe?

17. Russian Jews have been immigrating to Western Europe, especially
Germany, most of them with very little knowledge of Judaism.
What will be their impact?

18. What has been the role of the Hasidic movement in modern
European Judaism?

19. Following the Six-Day War, the Soviet Union, Eastern Europe,
and even deGaulle’s France shifted their policies toward Israel.
What was the impact on European Jewry?

20. Are the communities described in this book merely vestigial or
is there a future for Jewry in Europe?

A Jew Among Romans
Frederic Raphael

The Woman from Hamburg
Hanna Krall

Midnight in the Century
Victor Serge

Lawrence and the Arabs
Robert Graves

A History of the Jews in the Modern World
Howard M. Sachar

If Not Now, When?
Primo Levi

The Gods Will Have Blood
Anatole France

For the Soul of France
Frederick Brown

Cultures of the Jews, Volume 1

The Jews of Silence
Elie Wiesel

Mick
Peter Hart
Back to Top