Guns of the Timberlands Reader’s Guide 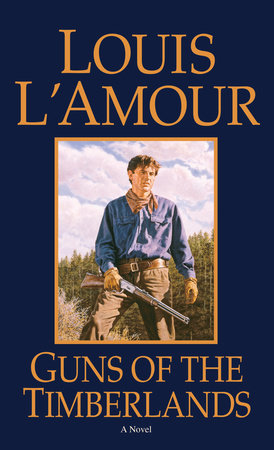 Guns of the Timberlands Reader’s Guide

In 1955, we at Bantam Books published our first Louis L’Amour book, Guns of the Timberlands. To celebrate this milestone, pick up your copy today and share the experience of reading L’Amour with another. To help foster conversation about the novel, consider the following:

1. Guns of the Timberlands has running through it many of the frontier challenges that were facing our nation in the mid-1800s: Use of natural resources, land ownership, right vs. might. Discuss these issues with your family.

2. Clay Bell had lived a whole life by the time many of today’s youth are just finishing up college. As it says on page twenty-six, “Bell was fightin’ Comanches when he was fourteen. Then he was in New Orleans a while, doin’ I don’t know what. After that he was a Texas Ranger for two years, and then in the cavalry durin’ the War Between the States…. After the war he rode with trail herds, hunted buffalo, and prospected in the goldfields.” Talk about the events and part of the country Bell has seen. Highlight the possible experiences of a fourteen-year-old boy 150 years ago as compared to today.

3. Bell offers Colleen Riley this advice (page thirty-four): “You never know a man until you see him lose.” Do you think it is good advice?

4. Law and law enforcement were different on the frontier. As is said about Judge Riley: “He knew the law, and adhered closely to the letter of the law, but since he had come west, he was beginning to feel … it was a purely general application. It was the judge and his sense of justice that gave law its meaning.” (page seventy-one) How do you interpret this? Does it seem true throughout the novel?

5. Life in a frontier town was small. In Tinkerville, Sam Tinker sits on the porch of Tinker Hose, his hotel, and watches what happens around him. How does this give him an insight into the dispute that no one else has? How do his actions drive the story?

6. Near the end of the story there is a fistfight rather than a gunfight. Why do you think that is? How does learning that L’Amour was a boxer, among his varied professions, color your answer?

Learn More About Guns of the Timberlands
print

To Tame a Land
Louis L’Amour

The Man from the Broken Hills
Louis L’Amour

Under the Sweetwater Rim
Louis L’Amour

Lonely on the Mountain
Louis L’Amour

Brionne
Louis L’Amour
Back to Top