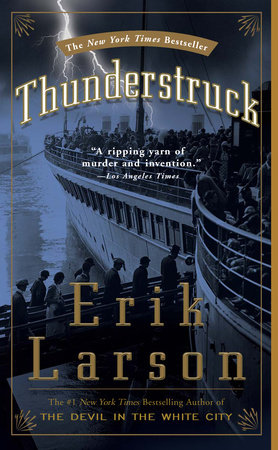 Erik Larson, bestselling author of The Devil in the White City and Isaac’s Storm, returns with another gripping examination of a watershed period in history. In Thunderstruck, he intertwines the fascinating, sometimes shocking stories of two Edwardian-era men: Guglielmo Marconi, the appallingly driven inventor of the wireless telegraph, and Hawley Harvey Crippen, a mild-mannered doctor who killed his wife in the notorious “North London Cellar Murder.” One’s creation helped to capture the other, while the capture itself catapulted the creation from the merely intriguing to the downright necessary, opening the door for the instantaneous communication we take for granted today.

Told with Larson’s renowned fusing of meticulous detail and propulsive storytelling, Thunderstruck is his best, most absorbing book yet.

2. The murderer Hawley Harvey Crippen and the inventor Guglielmo Marconi came from similarly prosperous backgrounds, and yet their lives took quite opposite turns. Compare the two men as characters–in what ways are they similar, and in what ways are they different? Who would you most like to have met, and why?

3. Now compare the two men to their respective spouses–is Marconi at all like Beatrice? What about Crippen and Belle?

4. Larson mentions Marconi’s “social blindness” throughout the book, considering it a defining trait. How did it affect Marconi’s success or failure? What was Crippen’s defining trait?

5. In specific terms, Crippen and Marconi were not linked–they never interacted with each other–and yet in Larson’s hands their stories fit together naturally. Why do you think that is? In what ways do the two men’s lives play off each other? How do you imagine they would have gotten along, had they actually met?

6. Marconi and Crippen were both foreigners in England, and yet they received very different treatment from the moment of their respective arrivals. Why? How is this reminiscent of the ways foreigners are treated in this country today?

7. Around the turn of the twentieth century, the supernatural, medical sleight-of-hand, and science were often treated in similar fashion–consider Lodge’s “scientific” studies of the paranormal, Crippen’s involvement in patent medicine, and the public’s mistrust of Marconi’s wireless technology. What parallels, if any, do you see to the way we treat emerging technologies now?

8. Isolation was a very real thing in those days, without the benefits of modern communication methods. How did Marconi’s invention change the world? Ultimately, do you think it was a change for the better, or are there benefits to the old ways?

9. Throughout the book, there are countless instances of betrayal: Marconi betrays Preece and vice versa, Belle betrays Crippen, Fleming betrays Lodge. Discuss the idea of betrayal and the specifics of it in Thunderstruck. In your opinion, whose betrayal is the most damaging?

10. Secrecy was vital to both Marconi and Crippen, but for very different reasons. Discuss the nature of their secrets, the motivations for them, and the ultimate effects.

11. Much of Marconi’s success was apparently based on gut instinct and simple trial and error, rather than any understanding of the science that lay beneath his discoveries. How would his methods be received now?

12. On page 69, Larson says that Marconi “was an entrepreneur of a kind that would become familiar to the world only a century or so later, with the advent of the so-called ‘start-up’ company.” What did he mean by this? Do Marconi’s practices remind you of any specific business leaders today?

13. Each man had two major romantic relationships in the book. Which, if any, was the healthiest? Which woman did you like best, and why?

14. Crippen is willing to subsidize Belle’s lifestyle and even her relationship with another man, only to murder her years later. Why do you think he behaves this way? Why didn’t he just cut her off financially? What finally drove him to murder?

15. Throughout the book, Larson foreshadows events that will come to pass in later pages. What purpose does this serve? How did you respond?

16. Crippen’s method for disposing of Belle’s body was quite gruesome. Larson quotes Raymond Chandler on page 377: “I cannot see why a man who would go to the enormous labor of deboning and de-sexing and de-heading an entire corpse would not take the rather slight extra labor of disposing of the flesh in the same way, rather than bury it at all.” Why do you think Crippen did it in that particular way? What does this say about him?

17. Do you believe that Ethel had no idea what had happened to Belle? Why, or why not?

18. The realities of an international manhunt were very different in the early twentieth century than they are today–as Larson says on page 341, “Wireless had made the sea less safe for criminals on the run.” Why has it changed so, and in what ways? Is it possible to hide in our world?

19. Discuss the media circus surrounding Dew’s chase of Crippen. Was this the beginning of a new era in journalism? What parallels do you see to many celebrities’ current war with the paparazzi? Compare the pursuit of Crippen to the O. J. Simpson chase.

20. If it weren’t for Marconi’s invention, do you think Crippen would have been caught? How might it have played out otherwise?

21. On page 379, Larson says, “The Crippen saga did more to accelerate the acceptance of wireless as a practical tool than anything the Marconi company previously had attempted.” Why do you think that is? What might have happened to wireless technology if not for Crippen?

22. At the very end of the book, Larson writes that Ethel was asked if she would still marry Crippen even after learning all that he had done. What do you think her answer was?

23. Why do you think Larson gave this book the title Thunderstruck? How does the term apply to Marconi and Crippen?

Midnight in the Garden of Good and Evil

In the Garden of Beasts

The Boys in the Boat

The Spy Who Came in from the Cold

Killers of the Flower Moon
Back to Top