The Feast of Love Reader’s Guide 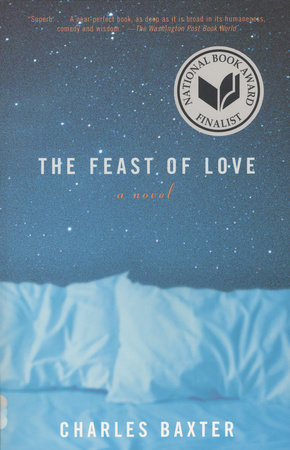 The Feast of Love Reader’s Guide

The questions, discussion topics, and author biography that follow are intended to enhance your group’s reading of Charles Baxter’s The Feast of Love. While this extraordinary novel takes on literature’s great themes–love, death, and life’s bewildering mixture of pain and happiness–it does so in a disarmingly simple way. As every character tells his or her own story, Baxter weaves each sharply distinctive voice into a chorus that is unforgettable in its comedy, wit, and profundity, as well as in the sheer reading pleasure that it offers.

Charlie Baxter, frustrated with his stalled book-in-progress, goes out for a midnight stroll and runs into a friend named Bradley Smith. Bradley tells Charlie to call his book The Feast of Love. He says, "You should put me in your novel. I’m an expert on love. I’ve just broken up with my second wife, after all. I’m in an emotional tangle. Maybe I’d shoot myself before the final chapter" [p. 12]. Bradley has an idea for Charlie: he’ll send people he knows to talk to Charlie, and Charlie can use their stories in his book.

We hear from Bradley’s first wife, Kathryn, who never understood what Bradley was about, and shortly after their marriage left him for a woman named Jenny. Then there’s Bradley’s second wife, Diana–who marries him even though she is passionately involved with David, a married man with two children. There’s Chlo?, who works in Bradley’s coffee shop, Jitters, and is wildly in love with Oscar, a young recovered drug addict. And there’s Bradley’s next-door neighbor Harry Ginsberg, a grief-stricken professor of philosophy whose youngest son is violently insane. Eventually all of these voices and stories converge to create a truly absorbing fictional world that transports the reader into the streets of Ann Arbor, Michigan, and into the lives of these characters.

When asked about how he came up with the idea for The Feast of Love, Charles Baxter replied, "I began by using my own insomnia, and a nighttime walk I took once down to the vacant lot at the corner of our street. I heard voices coming from someone’s house, and I thought of that line from Shakespeare, ‘The night air is full of voices,’ and I thought: I’ll write a novel with voices, a sort of Midsummer Night’s Dream in which people are paired off with the wrong partners at first and then are paired off with the right partners later, and everyone will tell their stories to Charlie, who will be this shadowy listener, like the reader."* The Feast of Love, like A Midsummer Night’s Dream, is a delightful immersion in the visions and dreams of a group of love-struck characters, a journey in which some of those dreams come true.

1. As the book opens, the character Charles Baxter leaves his house for a walk in the middle of the night. As he passes an antique mirror at the foot of the stairs, he describes the mirror as "glimmerless," a word he has used to describe himself [p. 4]. What does he mean by this? At the end of the novel, as dawn arrives, he tells us that "all the voices have died out in my head. I’ve been emptied out. . . . My glimmerlessness has abated, it seems, at least for the moment" [p. 307]. What is the real Charles Baxter suggesting about the role of the author in The Feast of Love?

2. Does Baxter’s decision to give the job of narration over to the characters themselves create a stronger sense of realism in the novel? Does it offer a greater possibility for revelation from the characters? What is the effect of this narrative technique on the reading experience?

3. Does Bradley become more interesting as the novel unfolds? Kathryn says of him, "He turned himself into the greatest abstraction" [p. 34]. His neighbor Harry Ginsberg says, "He seemed to be living far down inside himself, perhaps in a secret passageway connected to his heart" [p. 75], while Diana says, "What a midwesterner he was, a thoroughly unhip guy with his heart in the usual place, on the sleeve, in plain sight. He was uninteresting and genuine, sweet-tempered and dependable, the sort of man who will stabilize your pulse rather than make it race" [p. 140]. Which, if any, of these insights is closest to the truth?

4. The novel takes its title from a beautiful, light-filled painting that Bradley has made and hidden in his basement. When Esther Ginsberg asks him why there are no people in the painting, Bradley answers, "Because . . . no one’s ever allowed to go there. You can see it but you can’t reach it" [p. 81]. Does the fact that Bradley has been able to paint such a powerful image suggest that he is closer to attaining it than he thinks?

5. Why does Chlo? go to see Mrs. Maggaroulian, the psychic? Is the fortune-teller’s presence in the novel related to Harry Ginsberg’s belief that "the unexpected is always upon us" [pp. 290, 302]? How might this belief change the way one chooses to live?

6. What are Diana’s motivations for marrying Bradley? Does her reasoning process [p. 138] seem plausible, or is it the result of desperation and self-deception? Is Diana, at the outset, the least likable character in the novel? How does she manage to work her way into the reader’s affections?

7. Bradley is a person who baffles himself. He says, "I need a detective who could snoop around in my life and then tell me the solution to the mystery that I have yet to define, and the crime that created it" [p. 106]. Why, if his first wife Kathryn has a profound fear of dogs, does he take her to visit a dog pound? Why, if his second wife Diana is afraid of open spaces, does he take her to the wide skies and watery horizons of Michigan’s Upper Peninsula? Why does he often act in ways that will compromise his happiness? Is Bradley like most people in this unfortunate tendency?

8. The characters often define themselves in strikingly economical statements. For instance, Diana says, "I lack usable tenderness and I don’t have a shred of kindness, but I’m not a villain and never have been" [p. 258]; and Bradley says, "My inner life lacks dignity" [p. 58]. Do the characters in this novel display an unusual degree of insight and self-knowledge? Are some more perceptive about themselves than others?

9. In his description of the shopping mall in which Jitters is located, Bradley remarks, "The ion content in the oxygen has been tampered with by people trying to save money by giving you less oxygen to breathe. You get light-headed and desperate to shop. . . . Don’t get me wrong: I believe in business and profit" [p. 110]. In what ways is Bradley not a typical businessman? How does Jitters differ from a caf? such as Starbucks? What observations does the novel make about America’s consumer-driven culture?

10. Throughout literature (for example, in Shakespeare’s Romeo and Juliet), the traditional boy-meets-girl plot is complicated by the presence of a father or parents who refuse to sanction the union of the lovers. Can Oscar’s father be seen in this traditional role–as a potential threat to the happiness of Chlo? and Oscar? Or does he represent something far more threatening and evil? What is his effect on the latter part of the novel?

11. Harry Ginsberg tells Bradley about a poem his mother used to recite, about a dragon with a rubber nose. "This dragon would erase all the signs in town at night. During the day, no one would know where to go or what to buy. No signs anywhere. Posters gone, information gone. . . . A world without signs of any kind. . . . Very curious. I often think about that poem" [p. 88]. Bradley takes up the idea, and begins to draw pictures of the dragon. How does the parable of the dragon resonate with some of the larger questions and ideas in the novel?

12. Speaking of Oscar, Chlo? says, "Words violate him. And me, Chlo?, I’m even more that way. There’s almost no point in me saying anything about myself because the words will all be inhuman and brutally inaccurate. So no matter what I say, there’s no profit in it" [p. 63]. Does Chlo? underestimate her own talent for self-expression? Do her sections of the narrative belie her opinion about the uselessness of words?

13. How would you characterize Chlo?’s unique brand of intelligence? What are her strengths as a person? Is it likely that she will survive the loss of Oscar, and the challenge of single parenting, without any diminishment of her spirit?

14. Chlo? believes that she once saw Jesus at a party; she also believes in karma and similar forms of spiritual justice. Harry Ginsberg, a scholar of the Danish philosopher Kierkegaard, remarks, "The problem with love and God . . . is how to say anything about them that doesn’t annihilate them instantly with wrong words, with untruth. . . . We feel both, but because we cannot speak clearly about them, we end up–wordless, inarticulate–by denying their existence altogether, and pfffffft, they die" [p. 77]. Why do questions of spirituality and the meaning of human existence play such a major role in The Feast of Love?

15. In The Feast of Love, is sex an accurate gauge of the state of two people’s emotional relationship to each other? If sex is an expression of Chlo? and Oscar’s joy in each other, does it make sense that they attempt to use it to make some sorely needed money? Is it puritanical to assume that they are making a mistake? Why are they ill suited for the pornography business?

16. Based on what happens in The Feast of Love, would you assume that the author believes that love is necessary for happiness? Although they begin the novel mismatched, Bradley, Kathryn, and Diana eventually all find themselves with the partners they truly desire. Is it surprising that the novel offers so many happy endings? How does the tragedy of Oscar’s death fit in with the better fortunes of the other characters? Why has Baxter chosen to quote Prokofiev [p. 237] to open the section called "Ends"?

Charles Baxter lives in Ann Arbor, Michigan, and teaches at the University of Michigan. He is the author of six previous works of fiction, including Believers, Harmony of the World, and Through the Safety Net.
Learn More About The Feast of Love
print

The Locals
Jonathan Dee
Back to Top