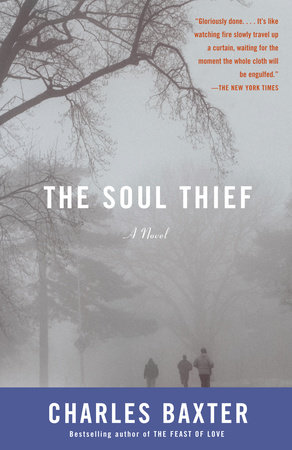 “Gloriously done. . . . It’s like watching fire slowly travel up a curtain, waiting for the moment the whole cloth will be engulfed.”
—The New York Times

The introduction, questions, and suggestions for further reading that follow are designed to enliven your group’s discussion of Charles Baxter’s The Soul Thief, a spellbinding novel about a man who truly finds himself only after his identity has been stolen.

When grad student Nathaniel Mason meets the brilliantly obnoxious and possibly dangerous Jerome Coolberg, the two begin a friendship that will call into question the boundaries of self, the province of memory, and the nature of what is real. The narcissistic Coolberg is forever engaged in “performative thinking,” making pseudo-shocking assertions, quoting texts that don’t exist, and retelling dreams he hasn’t had. He is by turns, and often simultaneously, fascinating and infuriating, and the subdued, diffident Nathaniel is both repulsed and intrigued by him. To make matters more complicated, Nathaniel falls in love with not one, but two women—the beautiful, erratic, self-consciously literary Theresa, and a lesbian sculptress and dancer named Jamie. Gradually, Nathaniel realizes that Coolberg is appropriating aspects of his personal history which he has not shared, stealing and wearing his clothes, and writing a story about him. Coolberg is sleeping with Theresa as well, and seems to be doing his best to drive Nathaniel insane. As his life begins to unravel, Nathaniel feels like “a character in a plot dreamed up by someone like Coolberg” [p. 112], a statement that will prove truer than the reader can know at this point. Eventually Nathaniel does indeed suffer a nervous breakdown while explicating, appropriately enough, Keats’s poem, “La Belle Dame sans Merci.”

In Part Two, the novel jumps ahead some twenty years, from the turbulent 1970s and the intellectual gamesmanship of grad school, to the more comfortable 90s. Nathaniel has settled into a peaceful life with his wife, Laura, and two bright and charming sons. Coolberg reappears, mysterious as ever, inviting Nathaniel to be a guest on his radio show in Los Angeles. Though Nathaniel declines, he does agree to meet with Coolberg, and their conversations in L.A., a city of illusions, illuminates much that has remained ambiguous about what happened between them years before, and indeed about the nature of Nathaniel’s story. When Nathaniel returns to home and reads a paper his eldest son has written on what we take for granted, he is overwhelmed with a sense of gratitude and love, not only for his family but for everyone.

A satirical, sharply perceptive, hall-of-mirrors narrative, The Soul Thief deftly explores the complexities of identity and the many ways stories both reveal and conceal the reality of who we are. Late in the novel, Coolberg argues that everyone is engaged in the kind of identity theft that he has committed with Nathaniel—that we are in fact a nation of imitators, and that our personalities are largely stolen. The novel forces readers to ask if that is true and, if it is true, what it means for our cherished notions of self, identity, and individuality.

1. Is The Soul Thief a work of “metafiction”? What aspects of its narrative structure—and of the narrators themselves—might be considered metafictional? How does it differ from more conventional, naturalistic novels?

2. A fellow grad student, Bob Rimjky, says of Jerome Coolberg: “Really, all he wants to do is acquire everyone’s inner life” [p. 15]. Why would Coolberg want to possess other people’s inner lives? In what ways is this kind of appropriation similar to what novelists do?

4. After it is revealed that Coolberg himself is “the author” of Nathaniel’s story, the narrator says that “the point cannot be that one person can take on another’s life . . . The point is that although love may die, what is said on its behalf cannot be consumed by the passage of time, and forgiveness is everything” [p. 203]. In what ways is The Soul Thief about love and forgiveness?

5. The Soul Thief exhibits a sharp satirical wit. What are Baxter’s chief satirical targets in the novel? What does his satire reveal about these subjects?

6. In his role as host of the radio show, American Evenings, Coolberg guides his guests to a revelatory moment that uncovers “the story’s secret heart” [p. 156]. What is the secret heart of The Soul Thief? How is it revealed?

7. In what ways does the act of telling stories save both Nathaniel and his sister? What is Baxter suggesting here about the power of stories?

8. When Nathaniel’s sister regains her powers of speech, Nathaniel rejects the idea that this was a miracle. Instead, he attributes her recovery to “the force of compassion, which under certain circumstances can bring the dead to life.” He goes on to say that “though a prejudice exists in our culture against compassion, there being little profit in it, the emotion itself is ineradicable” [p. 153]. Why would compassion have the power to bring the dead to life? Is Nathaniel right in suggesting that there’s a prejudice against compassion in our culture?

9. Why does Nathaniel fall in love with Theresa and Jamie? In what ways is his love for Jamie more real, even though she is a lesbian, than his love for Theresa? Why isn’t Nathaniel ever able to get over Jamie?

10. Coolberg asserts that we’re all copycats and that what he’s done is really no different than what everyone does. Is he right? Are we all adopting other people’s personalities or identities? How should Coolberg finally be judged?

11. Nathaniel asserts that identities are nothing more than “a pile of moldering personal clichés given sentimental value by the fact that someone owns them” [p. 87]. Does the sense of personal identity have any inherent value beyond the sentimental, either in the novel or in “real” life? Does the novel make a distinction between a soul and an identity?

12. Nathaniel wonders why Gertrude Stein keeps intruding on his consciousness. Why won’t Stein leave him alone? In what ways is Stein relevant to The Soul Thief?

13. Why does Baxter end the novel with Nathaniel offering “blessings on everybody. Blessings without limit” [p. 210]? What has brought him to this sense of gratitude, forgiveness, and all-inclusive love?

Charles Baxter is the author of eight previous works of fiction, including Believers, The Feast of Love (nominated for the National Book Award), Saul and Patsy, and Through the Safety Net. He lives in Minneapolis, Minnesota.

Time Will Darken It

Bech Is Back
Back to Top