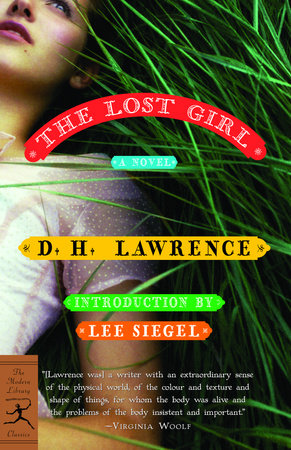 1. Consider Alvina’s life before she met Ciccio. Why do you think she felt the need to follow him? What opportunities would a woman of Alvina’s age and class have had in the nineteenth century?

2. How does Alvina’s life change once she reaches Italy? Is this all due to Ciccio? How is life in Italy different from life in England? What is Lawrence saying about the opportunities and limitations for women in England? In Italy?

3. V. S. Pritchett once wrote of Lawrence, “He is responsible for the fact that no living writer has any idea how to write about sexual love.” What do you think he means by this?

4. Critics say Lawrence’s earlier novels ponder the ideas of identity within the community, while his later novels explore notions of individualism and isolation. Identify isolation. How do you think The Lost Girl fits in with this argument?

5. Scholars believe that the first half of The Lost Girl was written before World War I, while the second half was written after the war. How could this have affected Lawrence’s themes? Consider Alvina’s journeys abroad–could Lawrence’s choice of these settings be a result of his disillusionment with society?

6. In the book’s last scene Alvina tells Ciccio, “We have our fate in our hands.” Is this Lawrence’s theme of the book? Do you think the author himself believed this?

The Man in the Iron Mask
Alexandre Dumas

The Vicar of Wakefield
Oliver Goldsmith

The Nice Old Man and the Pretty Girl
Italo Svevo

The Biographer’s Tale
A. S. Byatt

Typhoon and Other Stories
Joseph Conrad

The Beggar and Other Stories
Gaito Gazdanov

The Knight of the Sacred Lake
Rosalind Miles

My Fantoms
Theophile Gautier
Back to Top