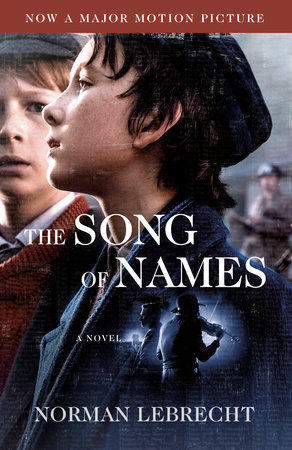 “Delightful. . . . Reveals an author full of knowledge, invention and passion. . . . A lovely book.” —The Telegraph (London)

The introduction, discussion questions, suggested reading list, and author biography that follow are intended to enhance your group’s reading of Norman Lebrecht’s The Song of Names, winner of Britain’s Whitbread First Novel Award.

The Song of Names is the story of two boys brought together on the eve of World War II. Martin is the son of successful musical talent agent Mortimer Simmonds. Dovidl is a nine-year-old violinist of extraordinary promise from Warsaw who arrives at Martin’s house to study with the celebrated Carl Flesch. With Dovidl’s family trapped in Poland, the two boys form a symbiotic relationship, so close that they hardly know where one persona begins and the other ends. Martin sees in Dovidl a brilliance that illuminates his existence. Dovidl sees Martin as a commonsensible mediator with the plodding world—or does he?

On the eve of his long-awaited international debut, after being hyped by Mortimer Simmonds as the new Fritz Kreisler, Dovidl disappears. The family business is destroyed and Martin spends the next forty years searching for the missing part of himself, unable to come to terms with his feelings of abandonment and betrayal.

Then, at a provincial music competition, he hears a young boy play as only Dovidl could have. How did he learn that technique? The revelation sets him on the trail to an astounding act of self-discovery and renewal. Martin finally finds his lost friend, changed in ways that he could never have imagined.

Unraveling the complex strands of love, envy, and exaltation that bind artistic geniuses to their admirers, Norman Lebrecht has created a novel in the grand nineteenth-century tradition, bursting with ideas and feeling.

1. How does Martin present himself as he begins to narrate his story? Does he attempt to make himself appealing to the reader, or not? Does he win the reader’s empathy as his story proceeds?

2. Discuss the difference between Martin’s and Dovidl’s characters and temperaments. Who takes care of whom, and who takes advantage of whom? How mutually beneficial is their relationship? How is the relationship unequal? How correct is Martin when he thinks, “In truth, I was his dupe. He needed me so much, he made me his prisoner, his emasculated acolyte” [p. 290]?

3. Is Martin, as the son and business heir of a professional music agent, necessarily at odds with Dovidl? Martin says of his father, “His interest in this new boy was evidently commercial. If Flesch was able to groom him, Simmonds would have a star on its hands, our first violinist of world pedigree. The opportunity had its humanitarian side as well, making it morally rewarding. I was being called to do my part as heir to the business, and for the benefit of my spiritual education” [p. 66]. How does this passage indicate Martin’s view of his father? Is his father purely ambitious and self-serving, or not?

4. What is the effect of the narrator’s description of life in Warsaw’s Jewish ghetto, and how does it compare to life in the well-heeled London neighborhood where Dovidl is transplanted? Compare this description to the one later in the novel of the Hasidic quarter in Oldbridge as first seen by Dovidl [pp. 216–18]. How much does a sense of loyalty to his origins account for the choice Dovidl makes when he turns away from a musical career?

5. How powerful is the emotional impact of the scene in which Dovidl hears the Rebbe sing from the “Song of Names” to recover the names and death dates of his family members? How does the logic of the scene, followed by the seven days of shiva, account for the turning point in Dovidl’s destiny [pp. 217–25]? If you have read other works of literature that hinge upon a scene of conversion or awakening, how does this compare?

6. How does the novel treat the culture of middle-class Anglo-Jews during the period it depicts? What are the values of Martin’s parents? What are the benefits of assimilation? Given Dovidl’s embrace of ultra-Orthodox Hassidism, would it be likely for the two men to resume their friendship once they meet again?

7. As a boy, Dovidl comments, “The real world is divided into two classes of humans: those who make things happen and those who let them happen. I belong to the first class” [p. 91]. Later we are told that Spielman and the Rebbe “had relieved him of the unbearable expectations of talent and admitted him to a world where all were equal in the sight of God and subject equally to His eternal laws” [p. 230]. How convincingly does the novel argue for the need of traditional and religious comforts for those who have suffered?

8. What is Martin’s attitude toward women throughout the novel? Consider his relationships with his mother, Florrie, his wife Myrtle, Eleanor Stemp, and Sandra Adams. Does the novel suggest that his only true love was for Dovidl, even as Martin denies a homoerotic aspect to their friendship [see pp. 92, 94, 290]?

9. In his teenage years, Dovidl is drawn to the danger and excitement of gambling, sex, and drugs, and Martin suspects him of a frightening amorality. Later, Martin suggests that artists of genius are perhaps in league with the devil: “The greater the musician, the closer he communes with the source of evil” [p. 291]. What insights does the novel provide into the idiosyncrasies of artistic genius and its effects upon those close to the artist?

10. Upon hearing the end of Dovidl’s story Martin reflects, “What a man feels in his heart of hearts is inscrutable to the human eye, and therefore immaterial. What counts is his conduct, what he does with his life.” Why then does he go on to say, “Now it is time to calculate penalties and methods of repayment” [p. 242; see also 292]? Is Martin’s desire to exact payment wrong-headed or understandable? How well does he comprehend the story Dovidl has told him?

12. Does Lebrecht indicate which of the two main characters is the novel’s hero? Did Dovidl make the right decision in leaving the secular life behind, as he explains himself in his letter to Martin [pp. 305–08], and does his decision make him morally superior to Martin? Or is Martin possibly right in his first reaction to Dovidl’s story—that “my susceptible friend was enticed by a fanatical sect” [p. 226]? What philosophy of life does the novel ultimately embrace?

13. Lebrecht creates something of a surprise ending by inserting himself as the character to whom Martin tells his story [pp. 310–11]. Lebrecht thus makes the novel essentially the result of this fictional encounter. What is the effect of this ending? Does Martin do this mainly so that he will be able to sell the Guadagnini violin that belonged to Dovidl?

Norman Lebrecht is a highly regarded commentator on music, politics and culture for the BBC and the London Evening Standard. He lives in London.