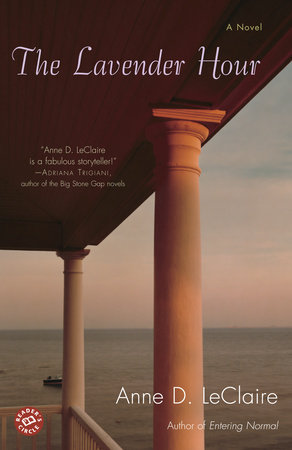 1. Why does Jessie call her mother by her first name? What does this say about their relationship? Does your family have nicknames or use specific names in different contexts?

2. Jessie is disappointed with her first visit to Luke’s, much of which she spends alone: “I sipped the coffee, bitter, and felt…What? Let down? This was so not what I expected” (p. 10). What do you think Jessie did expect out of her work with hospice? Why do you think she joined?

3. What do you think first attracts Jessie to Luke? Why do you think she has such an intense reaction when she sees his photograph?

4. Have you ever felt connected to a person simply by seeing his or her photo, as Jessie was in the novel?

5. Why does Jessie have such a strong aversion to her mother’s relationship with Jan? Why, in particular, is she so opposed to her mother’s transatlantic trip? How does this particular attitude reflect her own romantic insecurities? Her fears of death? Her belated grief for her father?

6. While she is on the Cape, Jessie’s close friendships are with two older women–first Faye, then Nona. Why does she gravitate toward these two women? How do her relationships with each differ? How are they the same?

7. Jessie says, after Luke gets sick on their outing to Dairy Queen, “Later I would see that, from the beginning, I wanted too much. Wanted too much in a fierce and violent way that could only lead to trouble” (p. 105).What does she mean by this?

8. The use of hair as a metaphor threads through much of the book. Faye points out that hair, out of which Jessie makes her jewelry, is actually already dead. She says, “Odd, then, that that part of us which is dead will outlast the living–the blood, body, bones” (p. 28). Later, on the first night they spend together, Jessie tells Luke a story about a woman who is saved by her own hair. Finally, a piece of Luke’s hair that Jessie had clipped is used as evidence against her.What do you think hair represents in the novel? Why is it so important?

9. When Jessie is first questioned by the police, she is still overwhelmed with grief for Luke. How does this harm her case? How, if at all, does the trial help her deal with Luke’s death?

10. Luke’s daughter, Paige, becomes the linchpin in Jessie’s trial. How would you describe Paige’s relationship with her father? How, if at all, are she and Jessie alike? Why do you think she is so interested in pursuing the investigation?

11. Why does Jessie choose to stay on the Cape, after it has caused her so much pain? What does it hold for her that Virginia does not?

12. Faye tells Jessie, “The dying can teach us how to die…. Maybe that serves as a model for how to live” (p. 18). How is that true for Jessie and Luke’s relationship? What does Luke teach Jessie?

14. Have you ever been close to someone throughout the dying process? How did your experience differ from Jessie’s?

When You Least Expect It

The Witches of Cambridge

The Shirt off His Back
Back to Top