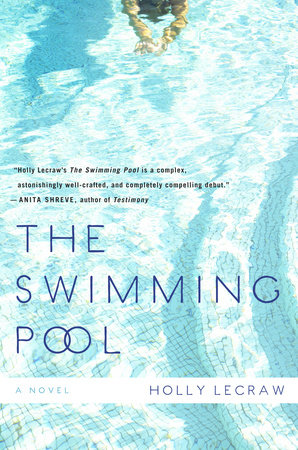 The questions, discussion topics, and suggestions for further reading that follow are designed to enhance your group’s discussion of Holly LeCraw’s powerful debut novel, The Swimming Pool.

Marcella Atkinson was a married woman when she fell in love with Cecil McClatchey, himself a married father of two. On the same night their romance abruptly ended, Cecil’s wife was found murdered.

Seven summers later, Marcella is divorced and estranged from her daughter, mired in grief and guilt. But when Cecil’s grown son, Jed, returns to the Cape and finds Marcella’s bathing suit buried in his father’s closet, this relic of the past sets in motion a passionate affair. In this twisting, sensuous novel of  devotion and infidelity, mistakes of the past must rise to the surface.

1. What are all the different forces that draw Jed and Marcella together? What taboos, exactly, are they breaking? What fruits does this relationship bear—and are they worth the transgression?

3. Marcella begins the book as a very broken and fragile woman. How long has she been like this? What has contributed to it, besides her divorce and Cecil’s death, and to what degree? What is her progression throughout the book—does she end up in a different psychological and emotional place? What are the signs that she might have changed?

4. The cocktail party at the McClatcheys’ pool becomes a centerpiece: at different points we see it from Jed’s, Callie’s, Anthony’s, Cecil’s, and Marcella’s POVs. How did such a mundane event become so central? What did that day mean for all these different characters? Discuss why all of them were so vulnerable at those particular times. What might Toni’s and Betsy’s perspectives—the only missing ones—have been like?

5. Why do you think LeCraw uses different points of view? Why might she choose a particular POV for a scene? How would the book be different if it were only from, say, Jed’s point of view, or some other character’s?

6. Do you think Marcella and Anthony will get back together? Does Marcella still love him? How and why?

8. LeCraw often documents action not as it is happening, but as a character is remembering it. How does the memory add an extra layer of meaning to the action? Why do you think particular flashbacks are interwoven at the points they are?

9. Discuss Callie and Betsy’s relationship—does it seem smooth? How does the nature of their relationship affect Callie’s grief process after Betsy’s death?

10. What is your prognosis for Callie and Billy’s marriage? Do you think Callie will change as a result of her postpartum depression?

11. (spoiler) How culpable is Anthony in Betsy’s death? In the end, how does it affect the reader’s experience of the novel and understanding of the characters to know or not know for sure?

12. (spoiler) How do you feel about Anthony and Marcella’s decision not to tell Jed what they know? At the close of the book, do you think they will keep their secret? Why or why not? What might happen either way?

Holly LeCraw was born and raised in Atlanta. She now lives outside Boston with her husband, journalist Peter Howe, and their three children. Her short fiction has appeared in various publications and has been nominated for a Pushcart Prize.

The Summertime Girls
Back to Top