The Diagnosis of Love Reader’s Guide 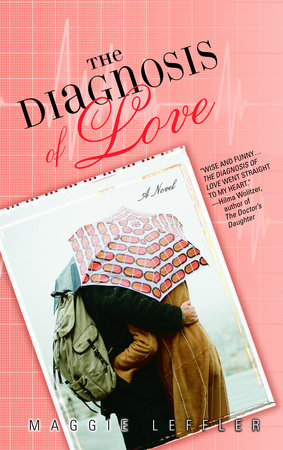 The Diagnosis of Love Reader’s Guide

What happens when a person works hard to be the ideal child and student, grows into a dedicated professional and all-around good person, but then suddenly realizes she doesn’t belong in the life she has carefully designed?

Dr. Holly Campbell is a young physician who is on a quest for answers that can’t be found in a medical textbook or be explained by the logic of science. After her mother’s death, Holly learns that she and her twin brother were nine years old when their mother had an affair. Shocked to discover this long-buried secret, Holly tries to reconcile this new facet of her family’s history with her version of the happy childhood she remembers. When Holly sets off for England, even she doesn’t know why she is there.

The adventure Holly embarks on when she lets go of everything familiar is brimming with hope, some fateful turns, and many unexpected discoveries.

The question and discussion topics that follow are intended to enhance your reading of Maggie Leffler’s The Diagnosis of Love. We hope they will enrich your experience of this charming novel.

1. Holly was motivated by a number of factors to make improvements to her life. What seemed to be the most significant catalysts, and why?

2. “I think of Matthew talking about truth lying in the space between things. That’s what I’m hoping for: to be convinced of just one true thing.” (page 189). Does the scientist in Holly allow for truths to exist without doubt? Does science leave any room for faith, or must every truth be proven beyond a doubt before it is accepted?

3. What does it mean to heal? Can doctors ever really be responsible for healing a person, or can they only heal part of the person? Beyond the physical, does the patient need to be a participant in the healing process, or can a broken person be “fixed”?

4. “It occurs to me that as a woman, I’m supposed to bring people into this world, and that as a doctor, I’m supposed to keep people from leaving it. By these standards, I am a failure.” (page 105). Whose standards does Holly refer to in this passage? Society’s, her family’s, or her own? What determines if your life is successful? Do you define your own standard of success, or is it your interaction with the world and others’ opinions of you that define your successes or failures?

5. At one point Holly wonders, “Is love a decision?” How much control do you have over whom you do, or don’t, love? Can you decide to be loved?

6. Did Sylvia, Holly’s mother, abandon her family when she went to Grenada to study medicine? Was she running away from her role as a wife and mother, or was she running toward something; a future as a doctor? What do you think would have happened to Holly’s family if the students had not been evacuated?

7. Do you agree with Holly’s father’s decision to stay married to someone who came back to their marriage not of her own free will but due to the outside circumstances that ended her affair? Once there, why did she stay?

8. Alecia, Holly’s future sister-in-law, advises her to “Let yourself go. At least long enough to believe that someone thinks you’re beautiful.” (page 125). Where do you suppose Holly’s self-esteem issues stem from? As a young woman who has accomplished a lot professionally, why do you think she is too insecure to feel she deserves a loving relationship or to live without putting up walls between herself and others?

9. Roxanne serves as a surrogate mother figure for Holly, Alecia, and others as the story unfolds. Do you think it’s her intuitive gift, illness, or her past relationships that gives her this nurturing disposition?

10. Sight is an important theme in this novel. Sylvia was an eye surgeon, and upon meeting Holly, Roxanne urges her to “Look around you…Maybe you need new lenses.” (page 144). Sometimes it takes stepping out of the world one is accustomed to, to be able to see oneself more clearly. Does Holly develop a rose-colored view of the world, or the ability to see herself being happy in an imperfect one?

11. A “recalled” minister-in-training, psi forces, God, a spirit guide named Clifford, a nationally ranked psychic, and Plato are all spiritual inspirations to Holly and her closest friends. In a modern age, is a confluence of beliefs encouraging or bewildering to those seeking guidance?

12. Each chapter begins with a piece of prescriptive advice or a diagnosis. What would your life be like if it came with its own textbook or instruction manual? Would it be a help or burden?

13. Does The Diagnosis of Love make you believe in fate? Why or why not? How does fate or serendipity traverse the lives of these characters?

Learn More About The Diagnosis of Love
print

The Secrets She Keeps
Deb Caletti

A Woman’s Worth
Tracy Price-Thompson

Twice Upon a Wedding
Jean Stone

The Beauty of Surrender
Eden Bradley

Letter to My Daughter
George Bishop

The Icing on the Cupcake
Jennifer Ross

Caught in the Act
Jill Sorenson

The Shirt off His Back
Parry EbonySatin Brown

The Pretend Wife
Bridget Asher
Back to Top