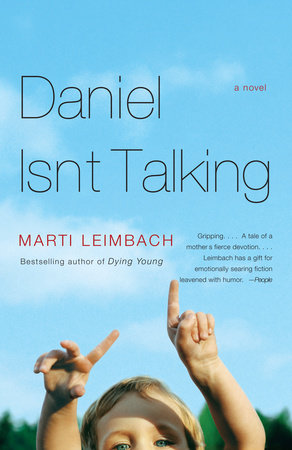 “Gripping. . . . A tale of a mother’s fierce devotion. . . . Leimbach has a gift for emotionally searing fiction leavened with humor.” —People

The introduction, discussion questions, and suggestions for further reading that follow are designed to enhance your group’s discussion of Daniel Isn’t Talking by Marti Leimbach.

Surprisingly funny yet deeply moving, Daniel Isn’t Talking is the story of a mother and a family in crisis. When Melanie Marsh learns that her son Daniel is autistic, she becomes determined to fight to teach Daniel to speak, play, and become as normal as possible. Melanie’s enchanting disposition has helped her weather some of life’s storms, but Daniel’s autism may just push her over the brink, destroy her resolute optimism, and bring her unsteady marriage to its end.

What sets this novel apart from most fiction about difficult subjects is Marti Leimbach’s ability to write about a sad and frightening situation with a seamless blend of warmth, compassion, and humor.

A Note from the Author

Daniel Isn’t Talking is a novel about a woman who discovers her young son is autistic. It is taken in part from my own life as I went through a similar experience five years ago, when my son was diagnosed with autism. About my son: I can tell you I was certain there was something wrong with him for some time before the actual diagnosis. I used to ask the doctors about these obscure symptoms. Why does he walk on his toes, I’d ask. Why does he grind his teeth like that? Why doesn’t he sleep at night? Or eat, for that matter? I mean, surely he should eat? And why doesn’t he talk?

And then one day the answer came and I wished I’d never asked the questions. “Because he is autistic,” I was told.

Autism in a child does not affect only that child. It affects a whole family. Suddenly, everything in my life was different. My normally wonderful husband became remote, unhelpful. The only way I could be sure he took in what I had to say was if I texted him on his mobile. His relatives went around saying things like, “Well, we have no history of autism in our family.” My own relatives, who are not warm and fuzzy people, weren’t much help either. My aunt thought it was my own fault for having a baby so late in life (I was thirty-three). My sister would say things like, “Wow, he’s autistic. So I guess you’re going to have to do something with him.”

Do something with him? I hate to think what she had in mind.

But yes, I had to do something. And just like the character Melanie in Daniel Isn’t Talking, I found myself scrambling to figure out what.

But of course, the novel is not a memoir, and what Melanie does in Daniel Isn’t Talking ends up being far more entertaining than anything in my actual life. Take, for example, the rather delicious Irish guy with whom she falls in love. I can tell you no such man has ever entered my house. I guess that’s just as well, because my husband is in my house. Eventually he dethawed and returned to being the nice guy he usually is.

In fact, very few of the events of the novel ever happened in my life, but the great thing about fiction is that you can take subject matter as difficult as that in Daniel Isn’t Talking and fill it with humor, with surprises, with events that escort the reader gently through the minefield which has become these characters’ lives. I positively loved writing the novel and I feel a particular affinity to it. I admire the main character, Melanie. She was so much braver than I was at the time of my son’s diagnosis. I fell in love with the therapist who shows her how to teach her son. And, of course, the Daniel in the novel is so much like my own son, Nicholas. He brought back memories of the day Nicky finally said his first word–at the age of three years and two months–and how hard he fought to learn the simple things that other children take for granted.

So, this is an important book for me. The latest statistics reveal that one in every 165 families has a child on the autistic spectrum, so I know that the book is going to touch the hearts of many people. I hope it will also touch parents who find that it is sometimes difficult to connect with their children.

For more information on autism or to make a donation to autism research please contact Autism Speaks at www.autismspeaks.org.

1. There are occasional flashbacks throughout the novel that give a glimpse of what Melanie was like before she had children. How would you describe her character before she became a mother? How has she changed?

2. Melanie and Stephen’s house empties out of possessions as Melanie sells their things to pay for Daniel’s various therapies and other needs. What does Melanie mean when she says, “I am in a different market than the rest of the world” [p. 164]?

3. How are the subjects of race and class treated in the novel?

4. Andy says he understands Melanie as an “autism mother.” What is the implication of this term? How might Andy’s perception of “autism mothers” be different than that of most people Melanie encounters?

5. When Melanie tells Veena about Daniel’s diagnosis, she makes an outright appeal for Veena’s compassion and sympathy. Instead, Veena says, “You are a white woman living in a white paradise. This is not the worst thing that can happen” [p. 59]. What does Veena mean by this? Why would Melanie find these words comforting?

6. How do you describe the connection between Melanie and Veena? How are these apparently very different women similar? What about their circumstances helps them to understand each other? Would they have been friends if Daniel was normal?

7. Early in the novel Melanie thinks she may be “unstable” [p. 13]. Would you agree with that? Following Daniel’s diagnosis, does she seem more or less “stable” to the world around her? To you as a reader?

8. On the morning of Daniel’s diagnosis, Melanie’s immediate reaction is to say, “I feel that a change has taken place. I cannot help feeling as though I started the journey this morning with my beloved little boy and am returning with a slightly alien, uneducable time bomb” [p. 55]. How has Daniel’s diagnosis temporarily changed his mother’s perception of him? What examples can be seen of her resisting this changed perception? How has Stephen’s view of his son been altered by the diagnosis?

10. Was Stephen’s departure useful in helping Daniel? In the long run, was his absence a good thing for Daniel? For Emily? How might things have been different for the children if Stephen had stayed?

11. At the end of the novel, Melanie states that Stephen “has shifted all blame for our marriage onto me. Onto my whims and desires. At the same time he has cleverly cast his bid. He is smart. Maybe that is what I found so attractive about him. I do not find it so attractive now” [p. 274]. How has Stephen made Melanie feel responsible for the failure of their marriage? Do you think she is to blame?

12. Melanie says that Andy “has touched a part of me that was dying and brought it to life once more. This belongs to him” [p. 183]. What does Melanie mean by this statement? What is the unusual nature of Melanie and Andy’s connection and deepening relationship? What do they know about each other’s families and backgrounds? Does this matter?

13. In Chapter twenty-three Melanie sees a group of young women at a bus stop. About one of them she says, “I want to tell her that she is a woman of great virtue. A woman of grace. That I admire her. And that I see her differently than perhaps she sees herself. Now that I have truly seen her, now that I have taken notice” [p. 258]. In what sense has Melanie “truly seen” this young woman? What stops her from speaking to the woman?

14. How is the reader’s experience of the novel affected by the knowledge that Marti Leimbach herself is an “autism mother?”

Mark Haddon, The Curious Incident of the Dog in the Night-Time; Kim Edwards, The Memory Keeper’s Daughter; Dani Shapiro, Family History: A Novel; Keith Donohue, The Stolen Child; Cammie McGovern, Eye Contact; Paul Collins, Not Even Wrong: A Father’s Journey Into the Lost History of Autism; Katharine Noel, Halfway House: A Novel; Jodi Picoult, Harvesting the Heart; Lisa Tucker, Once Upon a Day: A Novel; Audrey Niffenegger, The Time Traveler’s Wife; Sara Gruen, Water for Elephants; Chris Bojahlian, Midwives; Jacquelyn Mitchard, Cage of Stars; Anne Tyler, Digging to America; Paul Karasik and Judy Karasik, The Ride Together: A Brother and Sister’s Memoir of Autism in the Family; Catherine Maurice, Let Me Hear Your Voice: A Family’s Triumph over Autism; Kamran Nazeer, Send in the Idiots: Stories from the Other Side of Autism
Learn More About Daniel Isn’t Talking
print

More Than It Hurts You
Darin Strauss

Swim to Me
Betsy Carter

The Year That Follows
Scott Lasser