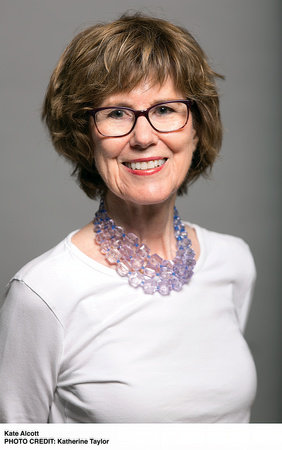 Kate Alcott is the pseudonym for journalist Patricia O’Brien, who has written several books, both fiction and nonfiction. As Kate Alcott, she is the author of The Dressmaker (a New York Times bestseller), The Daring Ladies of Lowell, and A Touch of Stardust. She lives in Washington, D.C.

A Touch of Stardust

The Daring Ladies of Lowell

Kate Alcott is not only the author of such female-forward historical novels as The Daring Ladies of Lowell, The Dressmaker, and A Touch of Stardust. She also is the pseudonym of Washington, D.C.-based journalist Patricia O’Brien, who had already written five novels under her real name when she first published a novel as Alcott. Her latest effort, The Hollywood Daughter, slides between early-1950s Los Angeles and late-1950s New York, and weaves such real-life celebrities as Ingrid Bergman into a fictional narrative about Jessica, a Catholic high school student whose film publicist father is directly impacted by the Red Scare of the era. Kate/Pat was kind enough to discuss how she built this narrative about the religious and political threats of mid-century Tinseltown without sacrificing any of its glamour.

PENGUIN RANDOM HOUSE: What drew you to historical fiction? How does this balance out your other work as a journalist?

KATE ALCOTT: I think one of the things that always intrigued me as a journalist were the stories I encountered that I couldn’t use in straightforward reporting but which raised tantalizing questions. Those were the things that could take you into the unknown. Some of the most magical stories have come from fiction, and that’s what drew me in. The idea that you can take the bare bones of the facts and then ask yourself, What really may have happened?

PRH:Have you always been a big fan of old films?

KA: I was always mesmerized by movies and the screen. I grew up in Los Angeles, and being a fan of films is kind of written into my DNA. “Old” films never seemed old to me until recent years!

PRH:Is there a particular film star that’s your favorite?

KA: Obviously Ingrid Bergman. Coming up right behind her is Elizabeth Taylor. We could identify with these stars. It was part of growing up in that era: You watched these captivating women on screen, and rather than recognizing they were actors, you could believe that what you saw was true. People did that with Ingrid Bergman. She was just living her life and she was excoriated because we wanted to make her into what we wanted her to be. That remains true for celebrities today, and I feel sympathy for those people.

PRH: Is there a particular film you favor as well?

KA: My husband’s father won the Oscar for “Citizen Kane,” and because I have to remain loyal, I will always say that “Citizen Kane” is my favorite film of all time.

PRH:What gave you the idea for The Hollywood Daughter?

Actually the themes of it came to me as a kid in L.A. I have a vivid memory of riding my bike down a hill with a friend, and she shouted at me, “Did you hear Ingrid Bergman ran off with a film director?” Well, I almost fell off my bike! I was a Catholic school girl, and I had made her into the characters she had played. She had been Joan of Arc, and the film studios had played up that semi-virginal aspect of her. That moment of realization became a seed. I’ve never forgotten what it felt like to be on that bike, and I wanted to explore what it must have been like to be a young woman in that world during that time. Because I wasn’t in that world at all.

PRH:What drew you to that moment in cinematic history? Do you feel that we are in a moment that mirrors the cultural tensions wrought by McCarthyism?

KA: I think there’s a similar resentment from those who felt shut out. At the time people were nervous about communism and fearful that their world would change, and this fueled the dark attacks that swelled up. People’s lives were devastated. I wanted to weave some of that into my story: What happened to the families caught up in all this? Many of those people branded as communists were just supporters of the labor movement, and once the witch hunt began their lives were ruined. I think it’s definitely related to today’s tensions. There remains for so many people a fear of the different and the unknown.

PRH:The Ingrid Bergman character in the book seems so in keeping with the person I’ve always imagined her to be. How did you create her?

KA: I was a fan of Bergman growing up, and that’s part of why it was so fun to research her. Basically I read as many things written about her as I could, including her autobiography. I took much of her dialogue in my book from things she really said or was reported to have said. I studied her style and her interests. I know she liked to knit, so I even wove that into two scenes. I wanted to really flesh out someone who was quite human, and who was trapped by her own fame and notoriety.

PRH:What aspects of this book are real? How did you blend the historically accurate details with the fictional central story?

KA: “The Bells of St. Mary’s” was not really filmed at a Catholic School as it is in “Hollywood Daughter” – that’s fictional. But that school was similar to the one I went to growing up, and I was able to weave details about life in a Catholic school into the story. The basic conflict of the book is between Jessica and her parents, and though that story is fabricated, that kind of tension is very real. Her mother is a devout Catholic and her father is this big film publicist who regards pious censorship as nonsense. And their relationship is pushed further by the historical shadow of communism.

I went through so many movie magazines from that era. I loved them when I was younger and I still loved them the second time around. You can also find so much additional material online. There’s footage of Bergman’s appearance at the Academy Awards after she returned to America, and you can see what she wore and how everyone reacted. By then the witch hunt had become somewhat embarrassing for everyone.

PRH: What gave you the idea to zero in on a Catholic family in Hollywood during this era? Did you research nuns from the era?

A Catholic family allowed me to illustrate the enormous power of religious censorship during that time, which was a story I hadn’t seen told in human terms. I didn’t really have to interview nuns because I’ve known them all through the years. I very much admire the many of them who showed their strength, courage, and independence, though that came much later. So the timing was fictional, but I wanted to give them a salute as a remarkable group of women who started forming their own communities and showing their grit.

PRH:Portia’s “quality of mercy” speech from The Merchant of Venice is used at some very key points. It’s wonderfully relevant to a lot of the changes taking place on a national landscape right now, but what drew you to it for the book?

KA: In high school I did a lot of public speaking. The Merchant of Venice was one of my favorite plays, and the “quality of mercy” speech was one that I memorized and delivered at several events. It’s always been kind of stuck in my head, so I bequeathed it to Jessica.

PRH:Do you think that the seeds of paparazzi culture can be found in this story of Ingrid’s alleged fall from grace?

Well, it certainly showed the public’s avid hunger for scandal. Even then there was a paparazzi culture that was ready to engulf the country. There have certainly been huge changes, and yet a lot of it has stayed the same.

PRH:The two Academy Awards scenes in the book are so delightful and fun. How did you research them?

KA: I actually attended the Academy Awards the year that “Silence of the Lambs” won best picture, and it was fun to be able to use the feeling of that in the book. I was also surprised by the amount of video footage that does exist of the awards through the years, and it was fascinating to browse the Internet and find so much of that. Much of what’s in the book is recorded as having happened behind the scenes.

PRH:What did you think of the kerfuffle that occurred at this year’s Academy Awards? Do you think there’s still glamour to be found in Hollywood today?

KA: I was astonished like everyone else. I’ve always been a loyal watcher, and in the aftermath, I actually started to wonder about why it’s taken this long for something like this to happen! With PricewaterhouseCoopers handling the awards, there’s this expectation that mistakes can’t be made. But we live in a time when public pratfalls are common, and the more I thought about it the more I was surprised that it hasn’t happened before. I also felt badly for Warren Beatty because he’s a good guy. He was a friend of my husband’s, and I worried that it would come off as this doddering old actor messing it up even though he didn’t.

I do think there’s still glamour to be found, and I think I’m always going to see it because I like it. But I know it’s not real, and that glamour goes along with an ever-increasing eagerness to chew up the stars. Because we know now more than when I was a kid that fairy tales don’t really exist. You can still lose yourself in the performance, and there’s certainly a tendency to believe what you see on screen is what you get in real life. But then you can meet an actor and think, Huh. What the big deal about this guy? And the illusion of glamour is kind of shattered.