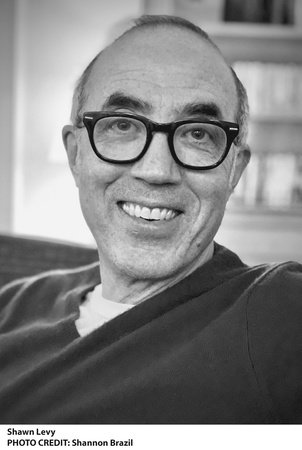 Shawn Levy is the former film critic of The Oregonian and KGW-TV. His writing has appeared in Sight and Sound, Film Comment, American Film, The New York Times, the Los Angeles Times, The Guardian, The Hollywood Reporter, and The Black Rock Beacon. He is the bestselling author of Rat Pack Confidential, Paul Newman: A Life, and Dolce Vita Confidential. He jumps and claps, and sings for victory in Portland, Oregon. www.shawnlevy.com

In On the Joke

The Castle on Sunset

Shawn Levy, former film critic for The Oregonian, is also a prolific biographer. His career thus far includes tomes on Paul Newman, the Rat Pack, and others. His latest book, De Niro, covers the life and career of Oscar-winning star Robert De Niro, from his parents’ storied past to present day. We caught up with Levy to talk about De Niro’s career, the edit process, and more.

PENGUIN RANDOM HOUSE: What in your opinion is the role that revealed Robert De Niro as the force he ultimately became known to be?

SHAWN LEVY: I wouldn’t take a single film but rather a single moment: In the fall of 1973, De Niro was simultaneously on screen as a dimwitted Southern baseball player dying of a blood disorder in “Bang the Drum Slowly” and as a hotheaded Little Italy wiseguy-in-training with a death wish in “Mean Streets”; there was even a time when those films were playing in side-by-side theaters on Manhattan’s Upper East Side, which was, in effect, the art house theater of America in those days. It’s nearly impossible to comprehend that those two performances came out of the same man – and a virtual newcomer – in a span of merely a few months. Even critics who never truly cared for his work (he rarely got a good review from Stanley Kauffmann of The New Republic, for instance) readily acknowledged his range in those films.

PRH: Your biography of De Niro is very broad in its scope – and certainly developed into a fabulous tome. Still, one imagines that some things had to be left on the cutting room floor. What of the edited-out material do you most miss in the final product?

SL: I wish I had been able to say more about an even deeper selection of films than I managed to. I think my background in criticism gives me a unique chance to combine biography with close reading of films. Even if I concede that not every one of his films merits detailed attention or critique, I kind of secretly wished I’d gotten to them all.

PRH: Robert De Niro is certainly one of our lifetime’s greatest talents. Which other actors and actresses out there today do you think are of his caliber?

SL: Of his generation, Meryl Streep, Dustin Hoffman, Al Pacino, Robert Duvall, Morgan Freeman, and a few others still working, not always with strong results but never without a strong aura of possibility. They’re surely in De Niro’s league. The nearest any actor has gotten to the power and variety of the young De Niro is Daniel Day-Lewis, who has that same ability to empty himself of all trace of whoever he is off-camera and fill it with the character he’s playing; just the thought of a new film with him in it is exciting, much in the way De Niro’s work was anticipated in the Seventies and Eighties. Cate Blanchett might be in that conversation as well – another remarkable chameleon, if not quite the same power as a movie star.

SL: Gotta be “Taxi Driver.” I saw it for the first time when it was brand new and I was just fourteen (!), and it was perhaps the first time in my life that I was completely overcome by a sense of what a director and an actor can do. It’s still probably De Niro’s most quoted performance, and still, with the possible exception of “Raging Bull,” the one most studied by younger actors. It announced him to the world as the most exciting talent of his generation, it’s deeply resonant, human, witty and daring work, and it meant more to me as an emerging writer and cineaste than anything else I had ever seen up to that time.

PRH: Let’s pretend for a moment that you’re advising a person who knows nothing of De Niro or his career or his filmography on which De Niro movie to watch first. Which would you choose and why?

SL: If they can only see one film, I’d have to say “Raging Bull,” because of the extreme lengths De Niro went to craft his performance, the vast range of physical and emotional work involved, and his fearlessness in dedicating himself so completely to depicting such a profoundly unsympathetic character. But if it were the start of a longer study, I’d go back to the two 1973 films – “Bang the Drum Slowly” and “Mean Streets” – to emphasize the range of his talent even at its first full bloom, and then follow that with “The Godfather Part II,” which is another astounding achievement in actorly craft – reverse engineering Marlon Brando’s Vito Corleone of just two years prior into a credible and full-blooded character.

PRH: In your film critic expertise, are there any up and coming actors today who you think may rise to the heights of De Niro?

SL: Well, nobody seems to be making films as simultaneously large and daring as the films De Niro was fortunate enough to make in the Seventies, so I’m not sure that such talents as, oh, Paul Dano or Joseph Gordon Levitt or Ezra Miller or Miles Teller or whomever will have that chance. De Niro was never going to be asked to do a superhero movie or a movie based on a board game back in the Seventies. So he had an advantage in that the material he had to choose from was of a higher standard than the material available to today’s young actors. And, of course, he helped make Method Acting the American standard, meaning that every gifted young actor today is almost literally following in De Niro’s footsteps just as he himself followed in the footsteps of Marlon Brando. If Brando is the Babe Ruth of American movie acting, bringing the craft into a new era, then De Niro might be Ted Williams, perfecting that which his predecessor brought forth.

PRH: De Niro has done a remarkable job of keeping relevant throughout his whole career thus far. What decisions along his way do you think have been instrumental in keeping him at the surface of the cultural radar? Does it really just come down to choosing the right roles?

SL: His choice of roles since about 1999 hasn’t been optimal – the Focker films, a lot of shabby thrillers and comedies, even some films that have been kept from the critics in advance of opening and some that didn’t play in theaters at all but premiered on DVD. But on the other hand, he hasn’t forced himself to do things that he can’t do – period films, say, or fantasy or a musical or a Western or a love story. He has, more or less, kept true to his metier. And he has shown in the past two years, in his two films with David O. Russell – “Silver Linings Playbook” and “American Hustle” – that he can still be quite potent and memorable. The main thing is that he has such a strong body of work behind him and still seems so vital and alive as a man that you can’t outright ignore his new work, even as you might no longer feel compelled to keep up with, oh, Jon Voight or Ryan O’Neal, to name a couple of guys who were at the top when De Niro was just getting started. And he has kept himself busy with business, cultural and philanthropic endeavors that tend also to reflect well on him.

PRH: Knowing all that you now know about De Niro, what would you say has been his primary motivation from the start?

SL: He has an immense work ethic, just immense, whether it’s to do with acting or the restaurant or hotel business or the building of the Tribeca Film Institute and its film festival and productions. He did very little by half-measures in the first forty or so years of his career (his first film was shot in 1963!), and then, when his energy for immersing himself fully in individual projects seemed to wane, he increased his workload as if to take up the slack; even if the films weren’t great, by god he worked hard at making them. I think also that he’s deeply committed to his family and has done a fine job of keeping strong bonds with his children – six in all, ranging from age forty-three to age two (yes, two). That’s probably the single most Italian aspect of his personality – the love of and loyalty to family – and it’s a very endearing aspect of his life.