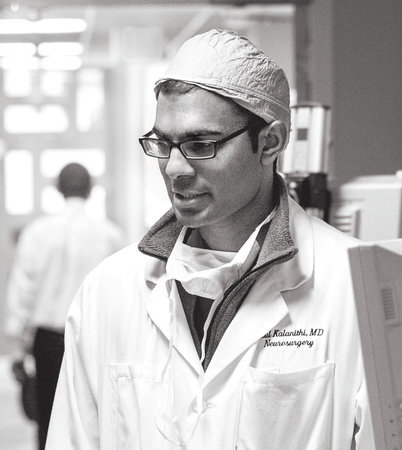 Paul Kalanithi was a neurosurgeon and writer. He grew up in Kingman, Arizona, and graduated from Stanford University with a BA and MA in English literature and a BA in human biology. He earned an MPhil in history and philosophy of science and medicine from the University of Cambridge and graduated cum laude from the Yale School of Medicine, where he was inducted into the Alpha Omega Alpha national medical honor society. He returned to Stanford to complete his residency training in neurological surgery and a postdoctoral fellowship in neuroscience, during which he received the American Academy of Neurological Surgery’s highest award for research. He died in March 2015. He is survived by his large, loving family, including his wife, Lucy, and their daughter, Elizabeth Acadia.