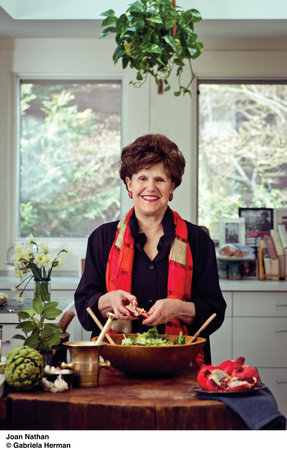 Joan Nathan is the author of numerous cookbooks, including Jewish Cooking in America and The New American Cooking, both of which won the James Beard Award and the IACP Award for best cookbook of the year. She was the host of the nation­ally syndicated PBS television series Jewish Cooking in America with Joan Nathan, based on the book. A frequent contributor to The New York Times, Tablet magazine, and other publications, Nathan is the recipient of numerous awards, including James Beard’s Who’s Who of Food and Beverage in America, Les Dames d’Escoffier’s Grande Dame Award, and Food Arts magazine’s Silver Spoon Award, and she received an honorary doctorate from the Spertus Institute of Jewish Culture in Chicago. The mother of three grown children, Nathan lives in Washington, D.C., and on Martha’s Vineyard with her hus­band, Allan Gerson.

Get more updates from Joan Nathan from his author site