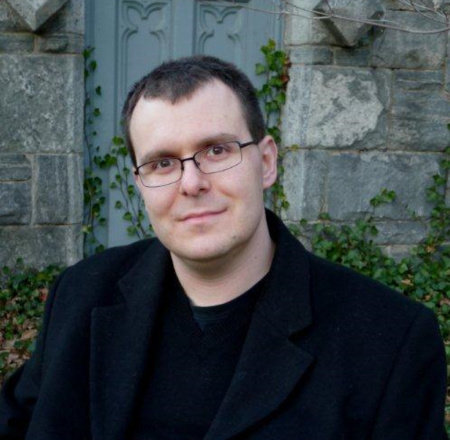 Django Wexler is a self-proclaimed computer/fantasy/sci-fi geek. He graduated from Carnegie Mellon University with degrees in creative writing and computer science, worked in artificial intelligence research and as a programmer/writer for Microsoft, and is now a full-time fantasy writer. Django is the author of the Shadow Campaigns, an epic fantasy series for adults published by Roc (an imprint of Penguin), and the Forbidden Library, a classic fantasy series for young readers published by Kathy Dawson Books (an imprint of Penguin Young Readers Group).

The Guns of Empire

The Fall of the Readers

The Price of Valor

The Palace of Glass

Books by Django Wexler published by Wizards of the Coast

Django. Cool name! What’s the story behind it?

I’m named after Django Reinhardt, a jazz guitarist who played in the 20s and 30s. I always think there should be a cooler story than there actually is—some kind of elaborate personal connection, maybe a mysterious family secret—but really my mom read the name in a biography and thought it was great. So you can credit my parents’ good taste!

You seem to know a lot about weapons––did you do a lot of research because you were writing what might be called a ’flintlock fantasy,’ or were you already a weapons buff?

More the latter, I think. The idea to write The Thousand Names—that is, a relatively realistic fantasy set in a roughly Napoleonic setting—came out of a lot of reading about the period. It wasn’t something I did deliberately for the book, it’s just the kind of thing I read for fun. I had been getting a little disappointed by fantasy authors who wanted to have giant wars in their books but either left out what the fighting was actually like or handled it in a very ahistorical way for no good reason. So I decided to try do it “right.”

After I started writing, I did get a few more books to answer some specific questions on how the weaponry and tactics worked, though. I’ve accumulated a small reference library I can poke through when I need answers.

What are the major influences behind your novel?

Well, as I said, one impetus was to try and write something that took the military stuff pretty seriously. I think George R. R. Martin was obviously a big influence in this regard, he really opened my eyes (along with those of many others) to the kind of things you could do in fantasy. The idea of writing a fantasy story drawing on real events for inspiration I got from S. M. Stirling and David Drake’s series The General, which is loosely based on the campaigns of the Byzantine general Belisarius. Janus, as a character, draws from a long traditional of slightly crazy geniuses, the two most influential of which for me were Sherlock Holmes (of course!) and Timothy Zahn’s Grand Admiral Thrawn.

Non–fiction–wise, David Chandler’s The Campaigns of Napoleon is a brilliant history of the Napoleonic wars, and more than anything else this whole project came from reading that book and thinking, “Wow, I want to write that.” Simon Schama’s Citizens, a history of the French Revolution, was also important, although that will become more relevant once the series goes on a bit.

The singularity is occurring in t–10 seconds. Which of your appliances/gadgets are you most afraid of?

Hmm. The ones that can do a lot of damage like the blender or the oven are the most obviously scary, but I’d have to go with my phone. If I didn’t know it had gained sentience, it could engage in a campaign of subtle psychological torture that would quickly drive me insane. Plus it knows everything about me.

What are you currently working on?

Well, right now, a lot of blog posts and interviews for The Thousand Names release! But my next real project is to edit the sequel, The Shadow Throne, and then get started writing book #3. I also have a middle–grade fantasy series starting next April with The Forbidden Library, so I’ll need to get some work in on those as well. Busy busy!