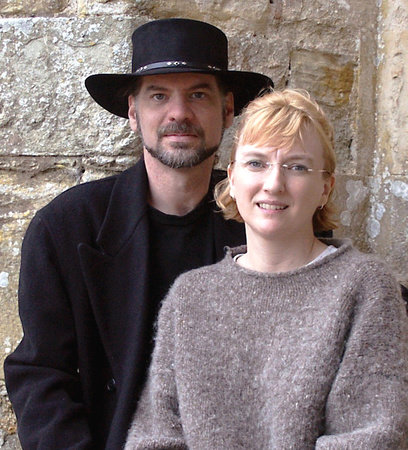 Barb & J.C. Hendee live just outside of Boulder, Colorado, close to the Rocky Mountains. Both are online college instructors in English. J.C. teaches for Metropolitan State College of Denver, and Barb teaches for the University of Colorado at Denver. Barb’s short fiction has appeared in numerous genre magazines and anthologies. She is the author of the novel Blood Memories. J.C.’s poetry, nonfiction, and short fiction have also appeared in many genre magazines.

A Wind in the Night

Novel of the Mist-Torn Witches

Question: After writing seven novels in collaboration with JC, what it’s like to work separately, without him, on this series of your own?

Answer: This is more difficult to answer than I expected because JC is more than just my writing partner. We live together and share an office. He’s my husband, best friend, and we do everything together to the point that it makes some of our friends nauseous. Bahahahahahaha!

Keep in mind that I’ll still be working on a book every year with him, and hopefully a “Vampire Memories” novel on my own. But I’ve recently finished the first draft for the sequel to Blood Memories, and I think I have a mental list of the positives and negatives of working alone after writing seven complex novels in constant communication with the same partner.

The Good: I’m a much faster drafter than he is. In the categories for “writer types,” JC is a textbook perfect drafter—meaning he can’t turn off his internal editor. He really labors over his sentences, and we write five to six hundred page first drafts. I’m a binge writer. Left to my own devices, once I get obsessed with a project, I go to bed thinking about it, wake up thinking about it, work very long hours, and drink too much coffee until the first draft is done. So, working on my own, it was nice for me to set my own pace without feeling like I was rushing him . . . or him feeling like he was leaving me sitting on my hands and waiting at certain points.

The Bad . . . and the Ugly: Okay, now for the tougher parts. He and I normally talk to each other and bounce ideas around for about a month (taking extensive notes) before we even start outlining a novel. I did not realize how accustomed I had grown to this part of the process. Then once we start an outline, I write our ideas up in a linear fashion (chapter-by-chapter, scene-by-scene), and he goes through my draft of the outline and starts expanding and moving things around, and the outline goes through a series of changes based on the ideas of two people . . . and he’s really good with plot. With two people working on the same book, we need to have an extensive outline.

But, also, for the creation of the entire book, we normally work at his pace, which is comfortable and sort of feels like a “day job.” He keeps me grounded. We get up, take showers, make breakfast together, watch the news, and then start working around nine o’clock, and we take a proper break for lunch around one o’clock.

Starting a novel on my own after doing seven “Noble Dead” books with him was a lot more daunting than I anticipated, and it did involve a bit of “blank page” syndrome. I knew exactly how the book would begin and how it would end. I somehow managed to outline the first three chapters, and by the time I reached the end of chapter three, I simply didn’t need to outline anymore. I just kept writing.

However . . . left to own “special pace” in the heat of a project, I get up at five-thirty in the morning and hit the coffee maker’s “on” button, and I start working in my pajamas with my hair sticking out in six different directions. Then I start working progressively longer hours. By the time I was halfway through with the book, he had to remind me to eat and take a shower. I’d look up and say, ‘Huh?” I’m sure I was driving him crazy.

JC is pretty stoic, but I think he did an internal “happy dance” when I sent the manuscript off to our editor in New York.

Right now, I’m working on the eighth “Noble Dead” novel with him (back on a much more normal daily schedule), but I don’t think I’ll have any trouble learning to switch back and forth. I love the characters in both series, and working on two such completely different projects has been fun for me. But we’ll see how much fun my next independent project is for him!