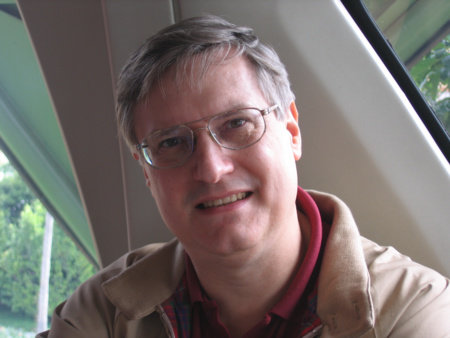 “Jack Campbell” is the pen name of John G. Hemry, a retired naval officer who graduated from the U.S. Naval Academy in Annapolis before serving with the surface fleet and in a variety of other assignments. He is the New York Times bestselling author of The Lost Fleet series and The Lost Stars series, as well as the Stark’s War, Paul Sinclair, and Pillars of Reality series. He lives with his indomitable wife and three children in Maryland.

The Lost Fleet: Beyond the Frontier

How has your background as a naval officer influenced your writing?

In the obvious ways (my experience with ships, how do drive them, how they work, how they are run, and the people who crew them) but also in terms of being exposed to many things I might well never have encountered on my own. Those include people I met and worked with, experience in many different areas ranging from engineering to politics, places I visited, and some really unique events I observed or in which I participated. Perhaps the most important lessons were seeing the difference between theory and practice in many things, and the differences between people and how those influence what happens and why. In the end, no matter what the equipment, it always comes down to the people.

The battles in “The Lost Fleet” series are incredibly realistic. Can you tell us more about how you worked out the logistics of space travel and how that would affect the battles?

The basic method I used was to apply my own experience with actual operations and ships. Assuming that my fictional ships were real, how would they have to engage in combat given the technology available to them? My own experience with time and distance when maneuvering very large objects helped a lot since it gave me a feel for momentum and relative motion. The real world is about limits on what you can do and how you can do it. Having learned how to operate within those limits allowed me to work out how similar actions would occur in space. At the same time, I had to take into account that these aren’t ships or aircraft on a planet. They operate in a different environment, and so in some ways are hybrids in capabilities and operating methods. The huge distances involved also play a role. In order to bring about action within a reasonable period of time, the ships have to be capable of very high speeds. That meant they would still be traveling very fast during their encounters, turning actual combat into very brief moments of very intense fighting. I also applied realistic physics to the action, seeing how that would limit communications, engagement speeds and other factors. By sticking to those rules, I was forced to create battles that felt realistic.

Do you base the war and politics in the series on any historic wars or politics?

The basic setting for the series comes from Xenophon’s March Of The 10,000, the story of a large force of Greek soldiers trapped deep in the Persian Empire who had to fight their way to safety despite having their most senior commanders killed by treachery. I wanted to see if I could successfully recreate that kind of situation on an interstellar scale. Beyond that, the politics and war in the series reflect a wide variety of settings. There are many aspects of people in such situations which seem to be universal, such as the temptation to match atrocity for atrocity with an enemy. There’s also the desire for a hero who will ride in, take control and save the day. The other major element of the series came from imagining how such a person would feel if they discovered everyone expected them to do the impossible. Geary has quite a bit of George Washington in him, especially in his willingness to give up power which could be his.

You’ve written several short stories as well as your full-length novels. Is the process different? How?

Short stories demand a different kind of discipline in terms of telling the tale quickly. Writing short stories forces a writer to learn how to say things without wasting words, whether it is describing a character or showing events. The pacing of a story (how quickly things happen) also varies depending on length. A short story has to have rapid pacing, in which events race to a conclusion, and even a 20,000 word novella puts real limitations on how much can happen in the amount of words available. In a novel, there’s much more room to explore, to add events, characters and places. On the other hand, a novel is a major investment in time. With short stories you can experiment a lot more, trying different things, and if they don’t work you haven’t spent the best part of a year working on them. Some ideas also work for short stories, but aren’t big enough to support a full-length novel. Other times a short story idea will turn out to be a lot bigger and become a novel.

Your books have been praised for really showing the human side of characters, something that not all military science fiction novels do. How do you balance the action and intense battle scenes with the focus on characterizations?

I think the action and the nature of the battle scenes flow naturally from the characterizations. What someone does under stress reflects who they are, with both their decisions and their reactions driven by their inner nature and their experiences. I see the characterization, the learning about who someone is, as being part of the action, just as the experiences in action have an impact on the characters. In addition, I believe that it’s important to have limits on what the writer can do, because that forces the writer to come up with realistic and believable events rather than simply having a miracle resolve a situation. Realistic characters have limitations, things they will do or won’t do, and taking those into account in personal interactions and in combat makes me write better because I’m dealing with the sort of real situations and people who make up the universe.

Which character in your novels do you most closely identify with?

It would be tempting to say Geary, but really he is the sort of person I could only aspire to be. I suppose the closest character to who I am is probably Duellos. He’s been around enough to not expect heroes or miracles, but he retains enough idealism to be open to the possibility that maybe those sort of things really do show up occasionally. He’s skeptical enough to question truths, smart enough to know when he could be wrong, loyal to someone who proves they deserve loyalty, and despite everything that has gone wrong or badly there are still things that he is willing to die for. He’ll probably never be the hero, but without people like him no hero would ever succeed.

I usually have a general idea of what will be in the story, where it is going and where it will end up. As I write, I modify the story as necessary to take in specific events or actions, and to reflect the development of the characters. In longer fiction especially I tend to write by bouncing through the entire book, writing scenes as they come to me and then going back as needed to adjust and tie things together. There are constant revisions. Research may be before writing (for things that form a foundation to the story) or during (for things that come up in the course of the story). Sometimes things I had planned on just don’t work as the story progresses and need to be dropped or changed, and sometimes readers make suggestions that give me new ideas. Every book is different, but in general I like to let the characters have some room to be themselves, even if that ends up pointing the story in unexpected directions. It is their story, after all.

Can you give us any hints about what’s next for Black Jack Geary?

The sixth book in “The Lost Fleet” will be Victorious, which will tie up the storyline begun in Dauntless. Victorious will cover a lot of territory as Geary has to deal with the Alliance government and its suspicions of him, as he attempts to force the Syndicate Worlds government to end the war, and as he confronts the mysterious threat on the far side of Syndic space. There’s also a little matter of his relationship with a certain battle cruiser commanding officer that needs to be resolved. I am working up a proposal for my publisher for follow-on books after Victorious, in which Geary will be dealing with the still very messy universe in which he found himself. There will be plenty of places left to explore, and plenty of battles left to fight.

I’m very grateful for the success of “The Lost Fleet”, and for the praise the series has received. The best part of writing the series has been hearing from those who found something special in the books. I’m also grateful that the series helps illustrate the sort of sailors and Marines who have been and will be forever on the front lines, and the sacrifices that they endure.