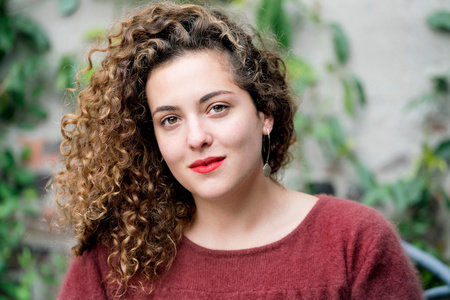 Nadja Spiegelman is the author of the memoir I’m Supposed to Protect You From All This. The daughter of Maus author Art Spiegelman and New Yorker art director Francoise Mouly, she grew up in New York City, and now divides her time between Paris and Brooklyn.

I’m Supposed to Protect You from All This

“My mother disdained most dangers as American constructs, invented by timid women who washed their vegetables.” With this introduction, author Nadja Spiegelman begins an exploration of her family.

Her story moves matrilineally, from her mother (formidable French expat and New Yorker art director Françoise Mouly) back to her mother (beautiful and inaccessible Parisienne Josée) and further back still, to the bootlegging great-grandmother she never knew and her mother Melanie. This passage back through time would lead Spiegelman to a richly layered history told by women.

From a young age, Spiegelman knew her mother could take on anything and come out victorious: Her mother taught her and her brother to swim in stormy oceans, to build perfect rain-forest dioramas, that a mouthful of earth would boost immune systems, how to drive a Jeep before she was old enough for her feet to touch the car floor. But there were flashes of something else too.

Often, Spiegelman and her mother’s versions of shared events did not line up. Spiegelman’s father Art Spiegelman — the graphic artist best known as the author of Maus, his Holocaust survivor’s tale — would hint at a different version of her irrepressible mother, that of an unsure, childlike young expat making her way in New York’s creative world.

Searching for her mother’s full tale, Spiegelman begins at her own childhood. She strings together the seemingly disparate pieces of her own younger years and her adulthood — which she now divides between Brooklyn and Paris — and builds a story of the women tied to her own identity.

She sets out to write about her mother’s life, with the tool her father used to tell his father’s: she interviews her mother at home in New York; she travels to Paris to spend time with Josée, interviewing her extensively as well, and getting to know Mina and Melanie’s stories through her mother’s and grandmother’s reminiscences. The stories she gathers are alternatingly contradictory and overlapping and she admits them all, allowing composites to emerge: Her mother’s life is presented in her own words, along with what the author herself remembers and Josée’s versions, too, for a tale of four generations of French women that is also a study in memory, the tales we tell ourselves, and what it means to place oneself in the context of a family.

History, it seems, is writing. It is a supernatural act by which the lives of others can gather meaning: “That is what magic was for me; meaning superimposed on chaos,” Spiegelman writes early in her book. And at the end, “I listened carefully and heard, beyond the waves, the distant rumble of a solitary car. I looked out toward the ocean. Through the layers of darkness, I could almost make out my mother’s shimmering form.” We spoke with Spiegelman about the writing of her mother’s story, and through it, of women’s lives.

PENGUIN RANDOM HOUSE:Your memoir goes back four generations, and I was struck by how it is a story of women. The men figure in there of course, but never as full characters. Did you find this was the necessary way to tell your mother’s family’s story?

NADJA SPIEGELMAN: Yes, one of the reasons that I wanted to have a very pared-down telling was that if I had been a journalist and had been looking for objective truth or trying to write a biography of these women, which would have been equally fascinating, then I would have interviewed and talked to other people in my family, too, but instead what fascinated me was this parallel narrative and how they operated almost in opposition of each other, as they wanted to tell them and not how other people wanted to tell them. It let me not have my father in my book, or my aunts, or my brother. It was also a way of telling women’s stories that often don’t make history. These small important moments of being a woman, losing your virginity, your sexual lives, these are things that transcend history, that connect us, and that every woman has had to deal with in her life and I wanted to be able to see that as clearly as possible as well.

PRH:Part of your story is about how to know what’s true when you’re interviewing your mother and your grandmother. You weave incongruities into your story through dialogue and by warning early on that as a child you had to keep written records so you would remember what was true. Can you talk about how truth and writing work together for you?

NS: I think as a child the idea of writing something down, if it didn’t make it true, it at least fixed it in time. I think part of the reasons that there are so many different versions of our stories is that we’re constantly rewriting our stories of people so that when our relationships with people are going well we forget about the bad stuff and the reverse is true too, when things are going badly, we forget about the good parts. Where the writing comes in is just to be able to freeze time, it serves as a recorded past. It serves as a fixed reference for history. I don’t think it makes it any more true, however, I think it’s still a subjective perception of reality.

PRH: I read a softer theme in your book as the history of Europe overlapping with that of the U.S.: Your great-grandmother’s relationship with Beppe, your father’s family and books, and of course you splitting your life between Paris and Brooklyn. Can you tell me more about reconciling these two sides of your family?

NS: I think that’s a different answer, depending on which two sides, there’s the side of Paris vs. New York and then there’s having had family on both sides in WWII.

Growing up in New York, I was so transgressive, the streets at 3 a.m. belonged to me, I would cut classes and get high at the Met Museum. It was impossible for me to see my mother doing the same things, and it was only when writing this story that I realized she had done the exact same things. And at the same time, New York is a city of constant reinvention and the streets that she came of age in were radically different. Her Soho was abandoned lofts and galleries, and my Soho was designer shops and tourists taking photographs of each other. Paris is very static and it’s like time just layers over itself, like ghosts. I felt like the city itself allowed me to envision what my mother and my grandmother had lived through there.

In terms of having had family on both sides of WWII, in France it was surprising to me how incredibly reticent even my generation is to talk about what happened. In school people are taught about the heroic resistance, but not about all the people who collaborated, making a living and supporting their family under the Nazi regime. The fact that I have family on both sides might make me not have to shy away from uncomfortable truths. I had family who lived very well [in France] in WWII and wore designer clothes and had fairy-tale things like horse-drawn carriages. It’s neither a totalitarian regime in which everything needs to be condemned nor is it an heroic resistance story. The truth is somewhere in between the worst possible narrative and the best possible narrative.

PRH: There are both cultural and generational differences that come during your interviews. How did they impact your writing?

NS: I think [the dynamics between men and women is] a profound cultural difference that still exists among my generation in France. There’s a very strong feminism there but it’s very different from what I grew up with in New York. I rarely hear them talk about changing the world, the conversation isn’t going to be about creating a lawsuit  or going to HR but it’s about how to face [harassing men], about how to create power in a way that works for them.

There’s a part of the book where my mother talks about a moment that I would call a rape but that she wouldn’t. I would say to her, This is terrible, you were a victim, and she would say, I don’t want to see this as something that has impacted my life, I don’t want to give someone the power over me. That was difficult for me to hear because it’s so different from how I was taught about these things in the U.S.. Yet at the same time I learned so much about my mother in that conversation, and that the way you phrase the problem can give you agency. As my grandmother says to me at some point in the book, everyone has a bad relationship with our mother when they’re sixteen. That’s true mostly, but then I learned about their adolescence and it was much worse than mine. Especially when I learned about my mother and grandmother’s adolescence, I realized both can be true: this can be an incredibly important developmental stage in your life and at the same time it can just be a natural stage of your life.

PRH:You have a long history, one that predates you, with the city you live in now. What is your Paris?

NS: It’s not the Paris I expected it would be. It used to make me feel very French to not love Paris. But then I moved there and I fell in love with all the things I thought were so cliché about it, which are true. It’s beautiful, people have a real emphasis of the quality of life, spending time with each other. To say that somebody is ambitious in French is an insult, and I grew up in New York so that was really surprising to me. When you’re at a party, nobody asks you what you do. To know someone isn’t a measure of what they do, it’s by the self that they’re bringing to that present moment, perhaps by their clothes, too, I don’t know if that’s any better [laughs]. I thought the only way forward was constant living and competition, to be living somewhere so different where things are so beautiful and so ethereal is really beautiful to me. At the same time, Paris is more and more beginning to look like Brooklyn, because Paris is very interested in Brooklyn, so it’s funny to come back and see Le Brooklyn brassiere while in Paris there’s Le Bedford that sells burgers. It sort of creates a strange back-and-forth.