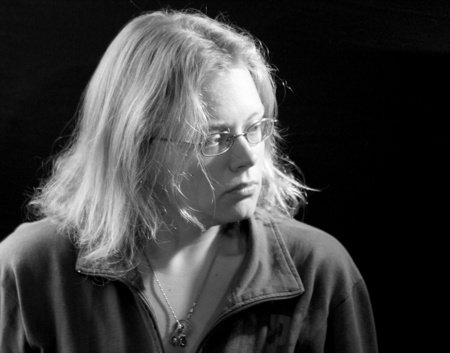 Seanan McGuire lives and works in Washington State, where she shares her somewhat idiosyncratic home with her collection of books, creepy dolls, and enormous blue cats.  When not writing–which is fairly rare–she enjoys travel, and can regularly be found any place where there are cornfields, haunted houses, or frogs.  A Campbell, Hugo, and Nebula Award-winning author, Seanan’s first book (Rosemary and Rue, the beginning of the October Daye series) was released in 2009, with more than twenty books across various series following since.  Seanan doesn’t sleep much.

You can visit her at www.seananmcguire.com.

Angel of the Overpass

Seanan McGuire is the author of several popular series, among them October Daye, and InCryptid. We recently discussed the origins of the latter, and learned some unusual historical trivia, to boot.

PENGUIN RANDOM HOUSE: The InCryptid series has been going for a long time, but there are probably some readers who haven’t encountered it before. Can you tell us about it?

Seanan McGuire: The base premise of the InCryptid books is that all of mythology and folklore’s monster stories from around the world are all true. They all exist, or existed at one time, and an overly efficient group of monster hunters, The Covenant of St. George, has wiped most of them out. What we’re following is a family of zoologists who are trying to protect the last monsters in the world because they are a vital and necessary part of the ecosystem. It’s a family story: We switch every couple of books to a new narrator. That way, we see different perspectives on this world. It’s really exciting for me.

PRH: I like the idea that monsters have a place in our ecology. How did you come up with that idea? How did you find a place in the ecosystem for them?

SM: Actual history here: You can look it up. It used to be that if you brought a gift to the King of France, it would be written down in the court records. They would, of course, record that so-and-so brought a bucket of gold, or so-and-so brought a kitten — whatever. In the actual history of records, a year prior to the first major French cholera outbreak, is the last record of someone bringing a unicorn’s head to the King of France. Supposedly, the last unicorn in France died, and unicorns purify water in most of the mythology, and then a year later, cholera appeared in the region.

I am a biologist. I went to college for a dual major in folklore and herpetology, so this is basically the series I was born to write. Nature doesn’t make things that don’t have a purpose. We may not like their purpose — no one likes mosquitos — but without them we wouldn’t have the density of biomass to feed the bats or birds. That’s what happens when you start kicking out parts of the ecosystem because you’ve decided they’re monsters and you don’t want to have around anymore.

PRH: If you found out monsters really were real, would you be happy, or would you be terrified? The good ones and bad ones would be around.

SM: I would be thrilled, because honestly, if we ever find out the monsters are real, we’ll find out the thylacines are still in Australia. I love the thylacines, and I think they are proof of mankind’s crimes against the planet. I would just like to see them given back. Then I’d have a sense that the biome can forgive us.

PRH: Yes, but what about the vampires, ghouls, werewolves …

SM: If I found out tomorrow that they were real, then they would have been real my entire life. So why should that change the way I’ve done things?

PRH: Would you consider crossing over?

SM: It depends on what I would be crossing over to, and what the terms would be.

PRH: Let’s say you can be any creature of myth or legend that you want.