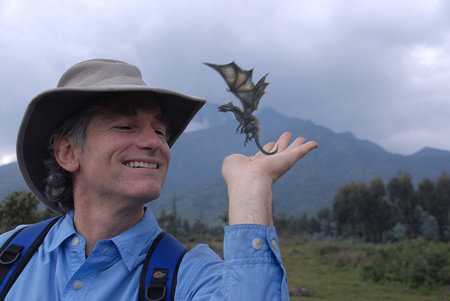 T. A. Barron grew up in Colorado ranch country and traveled widely as a Rhodes Scholar. Though he’d long dreamed of becoming a writer, his first novel was overwhelmingly rejected by publishers. He joined a successful business in New York and eventually became president – but he just couldn’t stop dreaming of becoming an author. So in 1990, he surprised his business partners and resigned. He moved back to Colorado to pursue his dream to be a writer, outdoorsman, and conservationist.

Today, T. A. Barron is the award-winning author of more than 30 highly acclaimed books, many of which are international bestsellers. He has won the de Grummond Medallion for “lifetime contribution to the field of children’s and young adult literature” and many other book awards.

His books include The Merlin Saga (now being developed into a feature film by Disney), The Great Tree of Avalon (a New York Times bestselling series), The Ancient One (the tale of a brave girl and a magical tree), and The Hero’s Trail (non-fiction stories of courageous kids).

In 2000, he founded the Gloria Barron Prize for Young Heroes, a national award that honors outstanding young people who help their communities or the environment. Each year, the award honors 25 inspiring, public-spirited kids from diverse backgrounds. Also, he produced a documentary film, Dream Big, profiling seven winners of the Barron Prize.

When not writing or speaking, T. A. Barron serves on many boards including Princeton University, where he helped to create the Princeton Environmental Institute, and The Wilderness Society, which recently honored him with its highest award for conservation work. T. A. Barron also loves hiking, camping, and skiing in Colorado with his family.

Sign me up for news about T. A. Barron and more from Penguin Random House

Books by T. A. Barron

More Series From T. A. Barron

The Adventures of Kate

Connect with T. A. Barron