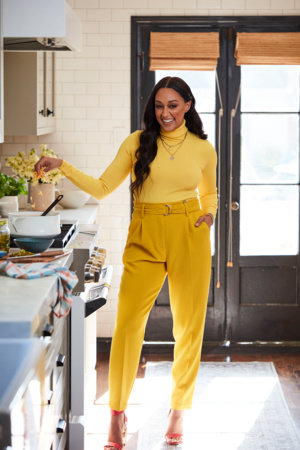 Tia Mowry has been in the public eye for more than twenty years, gaining initial fame in her teens starring opposite her twin sister in the hit comedy, Sister, Sister. Her work on the series won her two NAACP Image Awards for Outstanding Actress in a Comedy Series, and three Kids’ Choice Awards for Favorite TV Actress. After the series wrapped production, Mowry attended Pepperdine University, graduating with a bachelor’s degree in psychology. Tia’s hit show Tia Mowry at Home is currently in its third season on The Cooking Channel. She is also known for her lead roles on The CW/BET hit show The Game and the Nickelodeon series Instant Mom. When not acting, she spends her time in Los Angeles with her husband, actor Cory Hardrict, and her son, Cree Taylor.